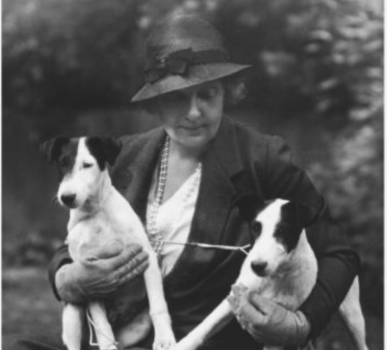 Her Grace The Duchess of Newcastle and friends.

Although I’m not active as a breeder at the moment, the planning of future litters of puppies – and all the thinking, research and hopes involved – are what has kept my brain ticking all these years ….

In each and every breed I have been seriously involved with, at their inception there have been one or two dogs (mainly males) credited as major influences as models and creations, and of importance for the evolution and future hopes of what is to be achieved.

And also in most breeds you will find one or two breeders mentioned as their creators or “founding fathers and mothers,” which is also interesting. Dobermans and Cesky Terriers are classic examples, but from different time periods.

In Wire Fox Terriers, you will find Old Tip as a cornerstone, while for instance in Cockers (probably even in the U.S, variety) you will find Oboe and Oboe II given a lot of credit.

All these dogs were very different from the desired future looks of their breeds as outlined by the early breed standards. In most cases more on par with what we see in the rings today, 100-plus years later, which is really fascinating.

It is so interesting that the foundations for, I dare say, a majority of our most well-known “modern” breeds were created during the last 25 years of the 19th Century by people who had no idea about anything called genetics and of course no DNA. So they could only use what they saw in front of them, and from that make their selection of which individuals were of interest and could be a move forward on their way to that dream: The Perfect Dog of Its Breed!

For a number of breeds the job they were created for was given higher priority than other, but for the two breeds I mentioned above – WFTs and Cockers – even at an early stage there was a split between the working and showing strains.

I have no idea how things were in the U.S. in those days, but in Scandinavia as well as most of Europe the diehard hunters created their own lines of working terriers. They mainly stayed inside the breed standard, normally within the Very Good level, then bred on, creating a pure hunting line. It was of course considered a tragedy that on occasion English Show Champions, from bloodlines that for many generations had no hunting background, had the audacity to defeat the “real terriers”!

That to me is nothing but a compliment to those early breeders who established a breed where the hunting instinct was installed so well that it was virtually impossible to breed out!

Interestingly, many German hunters did not find those show-bred Fox Terriers tough enough, so made their own creation: the German Hunt Terrier. When I was growing up this breed was never sold as a pet. You had to prove your interest and record as a hunter to get on their list.

If you decide to do some research you will find that even spaniels, setters, retrievers and hunting breeds in general were segregated based on purpose and intended function. Not to mention Greyhounds and Whippets.

Studying history you will often find that a very short time after a breed was considered a breed, a group of enthusiasts entered the scene who were not really interested in anything else other than creating an aesthetically attractive animal, but still within the criteria required to fulfill the purpose of its original architecture in the back of their heads.

From the point of view of the “hunting mafia,” these breeders who prioritized looks over function were considered near “criminals.” And even if in the U.K. there were numbers of breeders who tried to combine looks with hunting instinct, it was decided early on that a Champion was a Champion while a Show Champion was just that: a Show Champion. So then the Full Champion came in, where those useless beauties had to prove they still had the urge to do the work they were created for. Even so there was, and still is, a huge gap in looks and temperament between those bred by hunters for hunting and those bred with beauty – and I dare say – temperament and personality in mind!

On a more personal level: I was so impressed with my maybe not so close but still friend Dick Wylde – already world famous at the time for his “real” Eldwythe Cocker Spaniels – who took matters into his own hands when the American variety of Cocker Spaniel was introduced to Britain and had achieved championship recognition. There was talk in Kennel Club circles about classifying the breed as a Utility breed (which Dick himself referred to as The Useless for Anything Group and in the U.S. similar to Non Sporting), as dogs with that look could certainly not be of use in the field. Dick had at least two of his “Americans” trained to a high level, passing all tests and proving that the amount of coat and furnishings had nothing to do with their working ability. So the breed ended up, and rightly so in my opinion, in the Gundog Group!

And I am 100 percent certain that if any enthusiast at an early stage had made the same commitment to Standard Poodles, they would also be in the Gundog Group …

So even if Dick Wylde’s effort de facto did not affect the appearance of the breed, it probably affected the way they were judged? And proved that one person, if totally devoted, could have major influence in any area.

Maybe in Scandinavia and Continental Europe there was a clear distinction between how the hunters and the aestheticians assessed and judged any breed. In my early days of showing most gundogs would need a working certificate prior to even competing in the show ring. For Fox Terriers to achieve the International (FCI) champion title, passing a test was required. Which is probably why I am still obsessed with front assemblies, as so many dogs winning currently are too wide in front. (They might possibly be able to go to ground, but would never get back out again …) And Cockers could not even claim the National title until having proved their working talent.

But we are talking breeders who according to history were the designers of their chosen breed – or maybe even more so – creating the design that future breeders should, and hopefully could, be aiming for.

The real truth of the histories of so many breeds are mostly impossible to verify.

What some breeders did to improve certain aspects of their lines to speed up the process will never be fully known or understood. But it would still be extremely useful knowledge as to how to deal with certain issues.

We can come up with a long list of breeders whose contribution to their breeds were significant, but we also know that those huge kennels with sometimes hundreds of residents gave breeders a chance to pick and choose. And we have all heard stories of how tough the selection process could be …

Some of these old-time breeders like Frau Friederun Stockmann (I am sure husband Philip also played his part) in Boxers; Herr Louis Dobermann for – would you believe it – Doberman Pinschers; H.S. Lloyds, The Wizard of Ware, for English Cockers (although even early in great competition), and of course in my other own breed Wire Fox Terriers, The Duchess of Newcastle and her very influential strain of wires carrying her of Notts signature.

But to me the mystery of breeding is made even more mysterious by the fact that in a litter of six, seven or eight I have experienced that even if “parallel combinations” have been done, only one of the littermates produced puppies of quality that will forever be part of history.

Some time ago I wrote an article about the fact that we at times know too much about our own dogs, their background, siblings, etc., etc., which can negatively affect decisions.

I mentioned how when planning the next generation of any of our regular breeds, we took an entire litter from which the parents came into consideration and normally ended up with decent results.

Then we used dogs imported where the only things we knew were the names on their pedigrees and the dog itself. The reasons we used these dogs were simply their own looks, movement and temperament! No idea if they had any crippled, bad-tempered brothers or sisters! And from these combinations we often saw the best results.

I know I have shared this story previously, but on one early visit to a famous handler in the U.K., watching this exciting young dog on the table, I asked about his pedigree. The answer: Anything you want it to be.

Then on the next stop on this tour visiting another ex-handler, asking for help in finding a dog going back to a famous sire, I was told: Forget about that pedigree. That dog was served up to a dozen or more bitches on a weekend – indicating that a number of “understudies” were involved.

Then visiting other kennels for other breeds, dogs in numbers shared paddocks and occasionally unplanned combinations just happened. And even if there was no witness to the incident, the registered sire was always the most desirable one. But face facts: Most of the offspring went as pets, unregistered, but with a handwritten pedigree and up to the new owners to name and register their purchase. Still, a puppy being sired by a Champion carried a lot of prestige, even for a pet owner …

All this resulted in my own policy as a breeder of any breed: Only judge by what you see! (Apart from the cases where I knew that a breeder was totally committed and truthful – and actually and fortunately there were a few to lean on!)

So what do you think your legacy will be?

Is your main interest producing current winners? Do you have a long-term plan?

Will people in 50 or 100 years remember your name on par with Stockmann, Dobermann or The Duchess of Newcastle, Gasow or Helming?

I think it in so many ways is up to each individual to decide. But with the insight into how much sacrifice was made to create what we see in the ring today, we should all make the effort.

© Dog News. This article may not be reposted, reprinted, rewritten, excerpted or otherwise duplicated in any medium without the express written permission of the publisher.
Sat, 02/06/2021 - 2:51pm