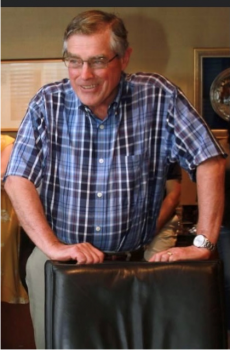 Ask the man who knows the answers

Reviewing for the second time the list of recipients of the 2022 American Kennel Club Lifetime Achievement Awards, we were so pleased that the good works of James Crowley were being recognized. Jim was with the American Kennel Club for 45½ years. He joined the American Kennel Club as the administrative assistant in the show and field plans department in 1971. The following year, he become that department’s manager. In 1979 he became director of event operations. Elected secretary in 1993, Jim became the executive secretary when the position was changed in 2001. Dog News has published articles profiling Jim in the past, but his wealth of knowledge on all things American Kennel Club can’t be ignored. In these offices, like many, many others, if you needed an answer to any question about the American Kennel Club, whether it be its history, rules, policies, finances and the like, you went to Jim, the man who knows. A little inside secret: Even longtime American Kennel Club employees would seek Jim out for answers to questions they might have had. So here we are more than five years after his retirement on March 17, 2017. The changes that Jim witnessed from the old offices at 51 Madison Avenue: Nicknamed the Ivory Tower, it had approximately 700 employees, including a night staff, who without benefit of computers and fax machines did all the point counting and point schedules manually. It was a time of one-day board meetings, no committees, everything paid for by registration income, not to mention a surplus. He was there for the first female delegate, first female field representative Irene Nail Bivin, first female vice president Nan Ayling, the first female board member Jackie Hungerland and the first female president Judi Daniels. Because he was elected every year by the board of directors he was also quoted as saying he was always one vote away from a job. He stayed longer that the nine presidents and 12 board chairmen whom he served during the course of his career.

Jim’s longevity at the American Kennel Club was that he did his job and didn't tell stories out of school, but quoted in a wonderful interview with Karl Stearns for Dog News he talked about “the book I may someday write.” If you are still interested, Jim, call us.

With Jim’s retirement, Gina DiNardo now holds that position. Big shoes to fill, but as the old adage about Ginger Rogers dancing with Fred Astaire goes, she had to do everything Fred Astaire did, but in reverse and in high heels. Go, Gina, but if need be, ask the man who knows the answers. Someone who lasted through all that deserves this award and more. Congratulations, Jim, well done.

© Dog News. This article may not be reposted, reprinted, rewritten, excerpted or otherwise duplicated in any medium without the express written permission of the publisher.
Thu, 07/28/2022 - 11:14am