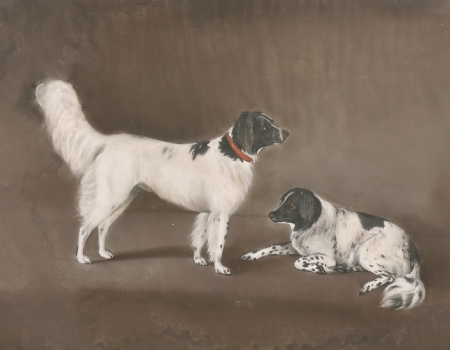 Affordable art across a number of popular breeds
By
Nick Waters

Auction house Dominic Winter has included in recent sales a number of lots by British artist and illustrator Cecil Aldin (1870-1935), who was working in the years before World War II. He is best known for his sketches of animals (dogs in particular), hunting scenes and other sports, and English rural life.

Winter was himself an enthusiastic sportsman and one-time Master of Hounds. Before he retired to the Balearic Islands, much of his life was spent “around horses,” and he encouraged youngsters to ride, organizing events for them.

His father was a builder who encouraged his son to draw, and when Cecil was older he studied art and drawing at a number of art colleges. One of his earliest drawings that he sold was a dog-show picture purchased and published by The Graphic in 1891.

Aldin was a great lover of dogs and owned a number of breeds, which he variously described as “the board of directors” and his “family.” The most famous were Micky the Irish Wolfhound and Cracker the Bull Terrier, and they feature many times in his work.

Such was his output over the years that aficionados of his work can build up collections within a collection. 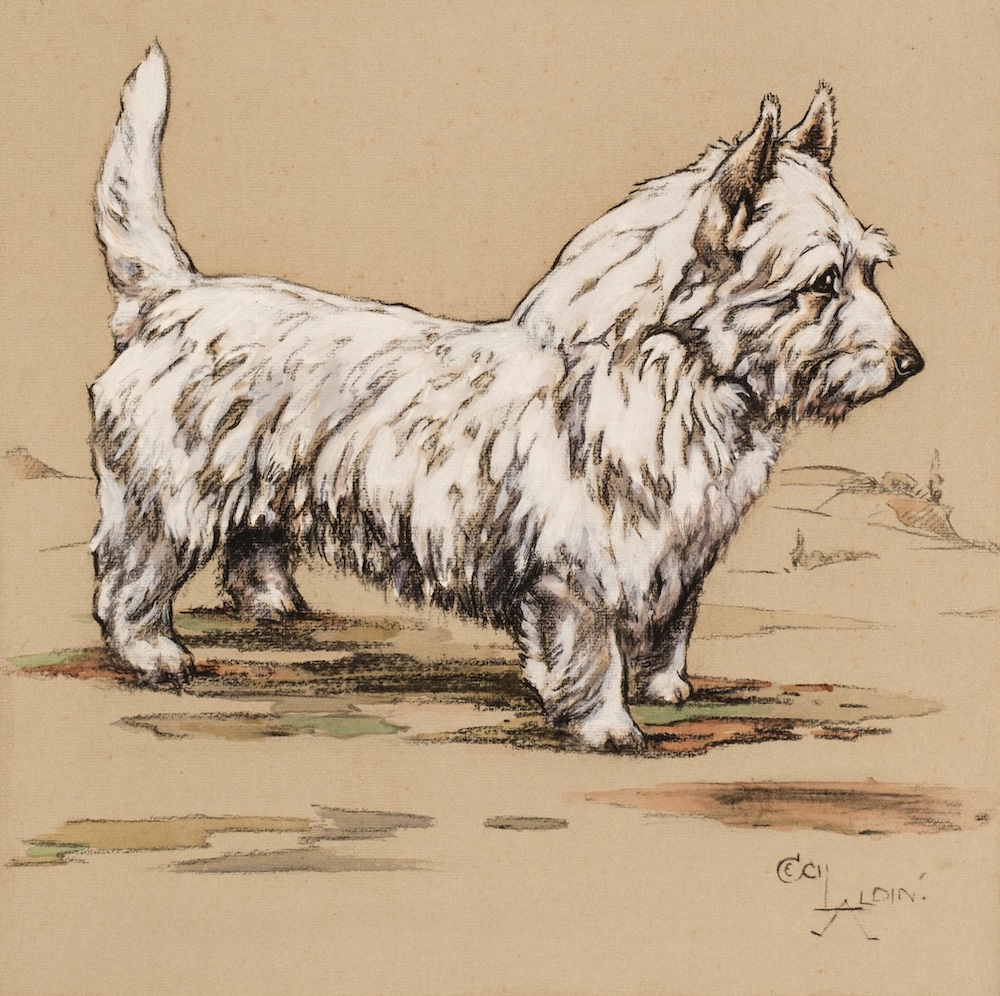 Two of the lots in Dominic Winter’s sale were a charcoal, watercolor and bodycolor drawing of a West Highland White Terrier that sold for £500 and a pastel drawing of Rilke and Günter, two Wirehaired Dachshunds, an unusual subject for Aldin, which realized £1,300. 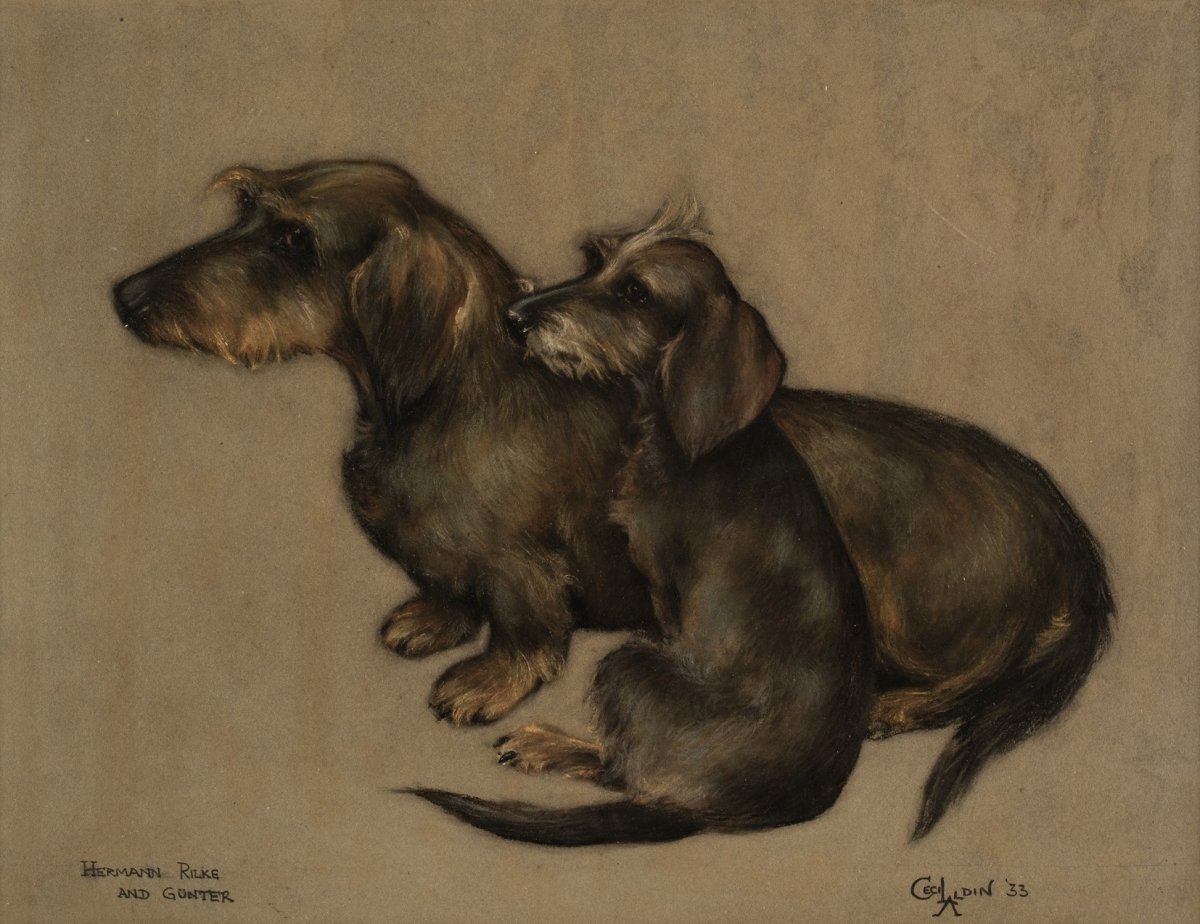 Parker Fine Art Auctions often manages to collect a few dog pictures for its sales. Among those in its more recent sale were two pictures of Toy Spaniels by Henry Bernard Chalon (1770-1849). Chalon was the son on a Dutch émigré. He studied art at the Royal Academy Schools and then started specializing in sporting and animal painting. He was appointed animal painter to Frederica, Duchess of York, in 1795 and later to both the Prince Regent and King William IV. Royal patronage also led to work for many other socially prominent sporting enthusiasts. 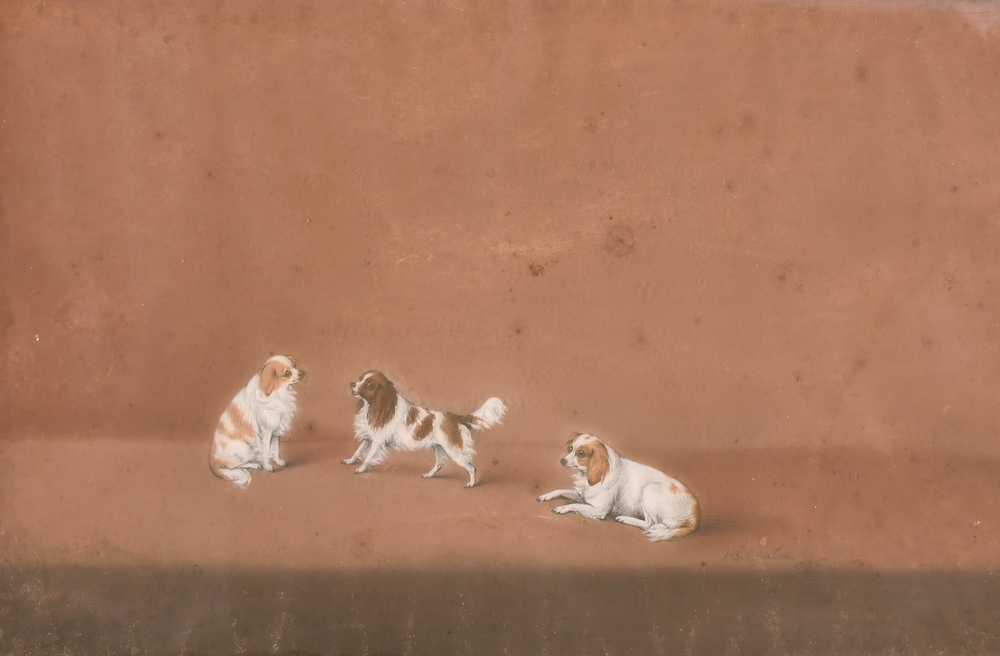 The two pictures offered by Parker were very substandard for the artist, and the estimates and prices realized reflected that. A pastel study of three dogs realized a below estimate £280, and the better picture of the two sold for a bottom estimate of £400.

One of the leading artists to come out of Wales and who was widely regarded as the defining artist of Wales during the 20th Century was Sir Kyffin Williams RA (1918-2006). From an old, landed Isle of Anglesey family, he was born, lived, worked and died on the Island. However, he was educated in England at Shrewsbury Public School and from there studied art at London’s Slade School of Fine Art.

He was primarily a painter of the rugged Welsh landscape, and his use of thick paint applied with wide, sweeping strokes of the brush and sombre colors define his work. Portraits of dogs never featured in his oeuvre, but working sheepdogs frequently appear as a part of the composition. They are, after all, synonymous with Welsh hill farms. 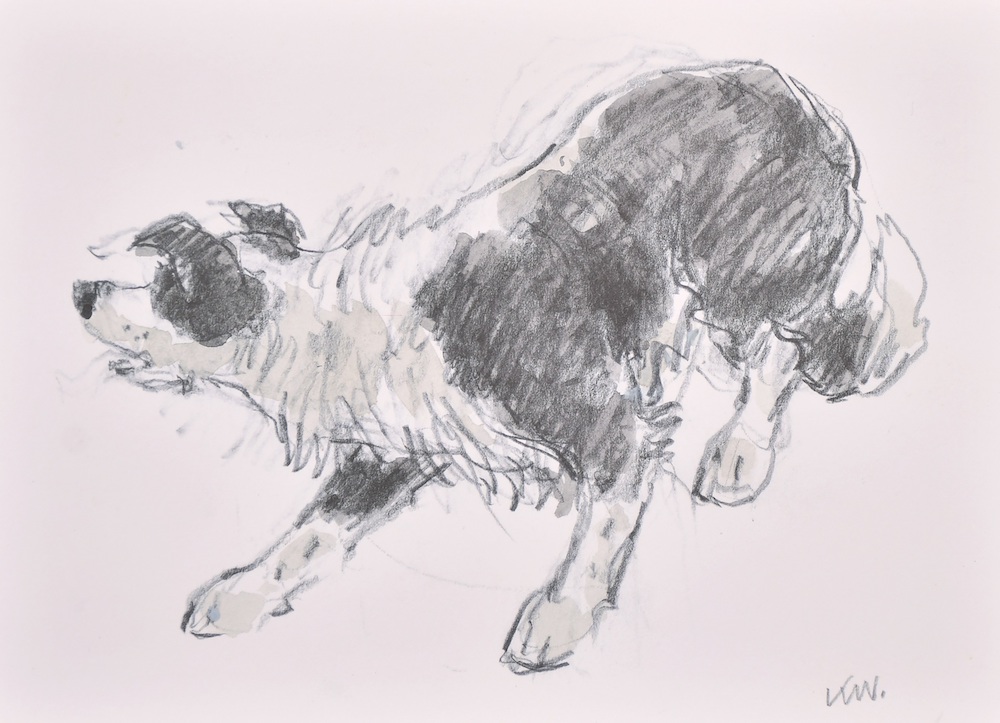 Parker’s offered a printed invitation card to an exhibition of the artist’s work that featured a sheepdog named Mott shown in typical pose for a dog working sheep. Signed and inscribed, it sold for a mere £40.

Chalon was by no means the only artist painting Toy Spaniels; they were one of the most featured of all dog breeds in both breed portraiture and as an accompaniment in human portraiture right up until the end of the 19th Century. The subject matter appealed to some of the best artists in the land, as well as jobbing artists of the Naïve School. 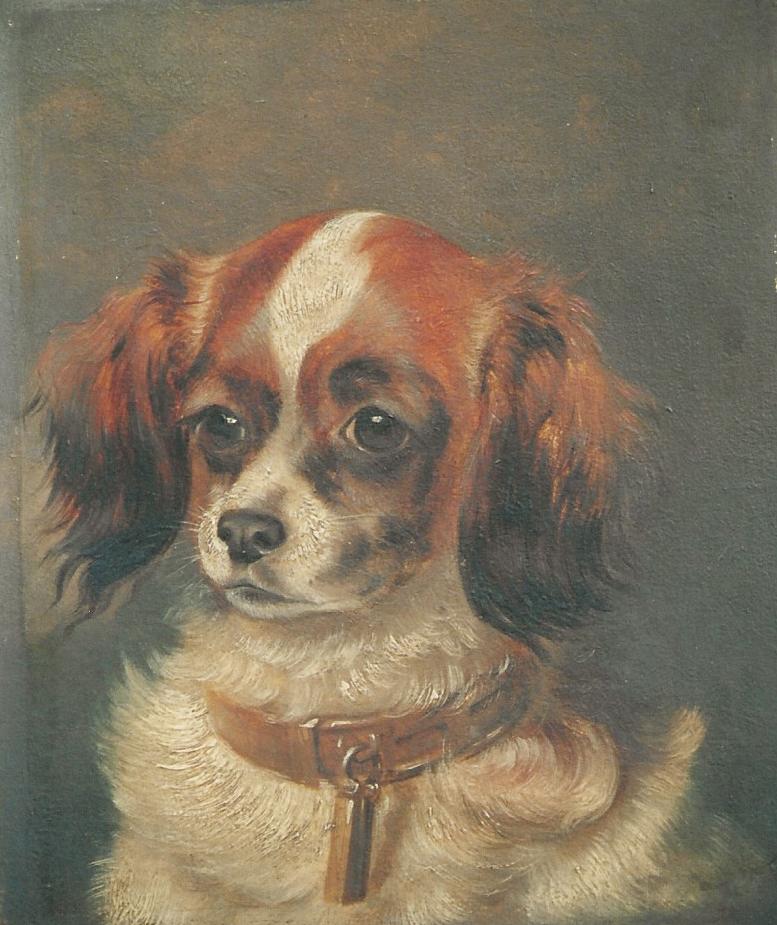 The charming and well-observed head study of a Blenheim painted circa 1860 is one such painting by an unknown artist; it sold for £1,100 at auction.

Universally referred to as “Black Forest,” virtually all such carvings were done in Switzerland. The tradition goes back to 1816, when a man named Christian Fischer hit upon the idea of making simple wooden objects specifically for tourists, which he sold by the Giessbach Falls, an attraction close to Brienz. By the end of the century, it had become the major industry for Brienz and neighboring towns and villages, with an estimated 2,000 carvers working in the area.

By the middle years of the century what had started out simply as “folk art” had been developed by some of the more skilled carvers into art of great merit. St. Bernards, bears, stags and other images of the forest are the most popular, and today usually command the highest prices. 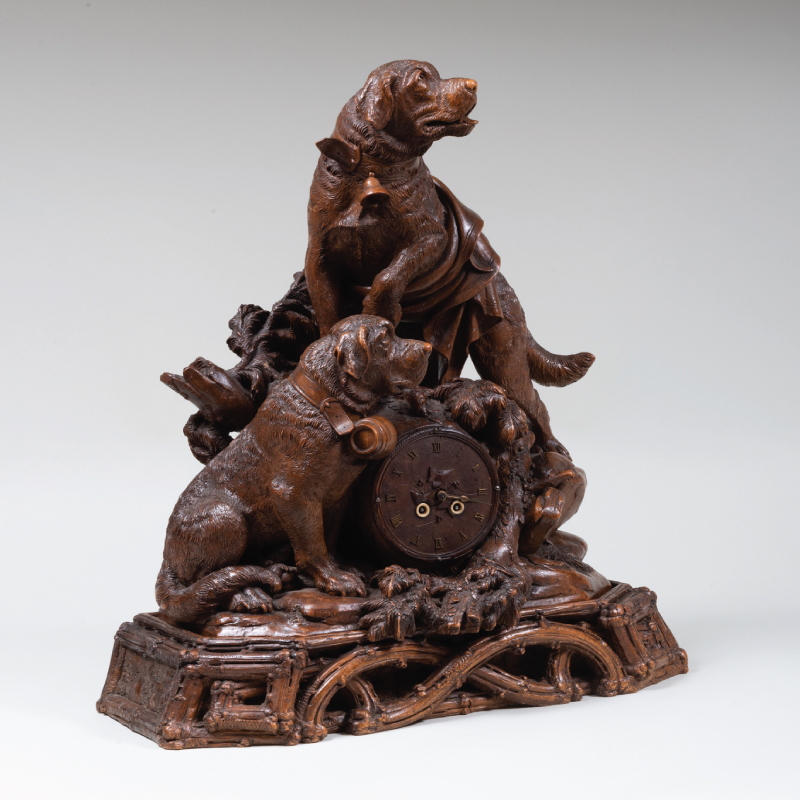 The St. Bernards can loosely be divided into two categories – crude tourist souvenirs and craftsmen pieces; the St. Bernard clock group fits into the latter. It is fitted with a clock movement signed “Lenzkirch,” a clock-making company founded by clockmaker Eduard Hauser in the town of Lenzkirch in the Black Forest in 1849 and which ceased production in 1932. Its products retain a worldwide reputation for excellence to this day. 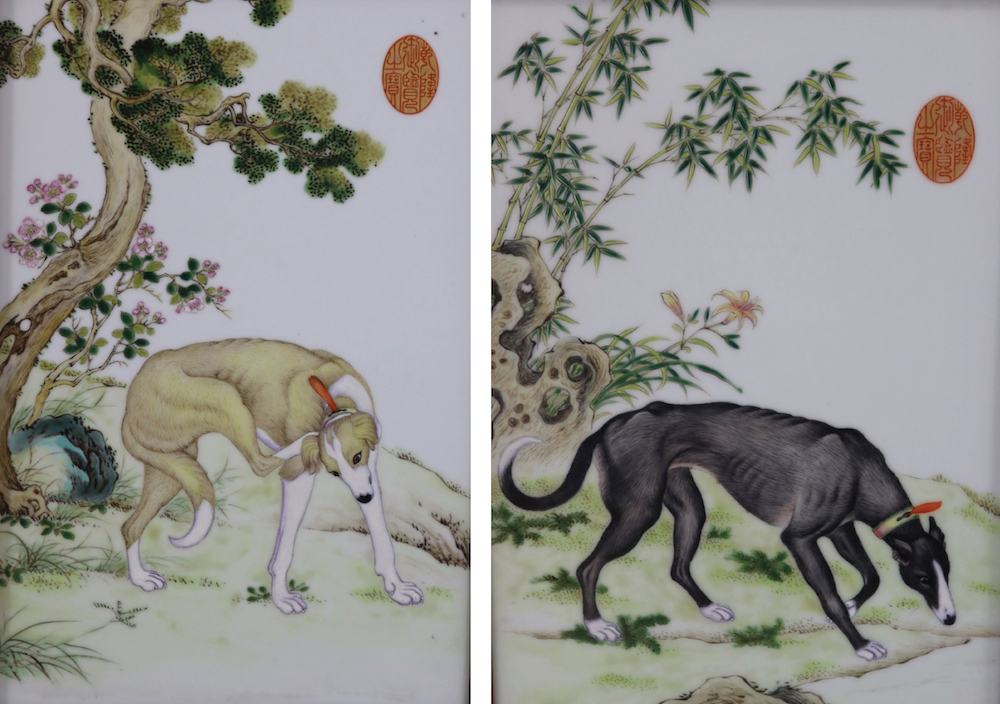 Clarke Auction Gallery in Larchmont, also in New York State, is selling a pair of signed and enamel decoration Chinese plaques estimated at $600-900. Each depicts a Greyhound-type dog beside a tree and is signed with characters to the top right. The fawn and white dog is shown scratching its ear, a trait that has been shown in art throughout the centuries – one of the earliest depictions being a Greyhound type on an Athenian red-figure cup from circa 500 BC in the Ashmolean Museum.

© Dog News. This article may not be reposted, reprinted, rewritten, excerpted or otherwise duplicated in any medium without the express written permission of the publisher.
Mon, 08/30/2021 - 2:01pm