After wisely cancelling their 2021 show in the midst of the pandemic, Crufts made an impressive comeback this year, with about 16,000 dogs entered from nearly 40 countries.

After having managed to cope with the complications of the Covid outbreak, The Kennel Club this time had to deal with the very difficult political situation that resulted from Putin’s invasion of Ukraine not long before the show’s March 10 to 13 dates. In addition to condemning the military action, they also stood firm in their resolve to deny the entry of Russian exhibitors and Russian-owned dogs. I would assume that many exhibitors also decided to stay away due to the continuing menace of Covid and the fact that there would be tens of thousands of people in a relatively confined space. In spite of signs around the National Exhibition Centre’s 25-acre show site, very few people were masked. Unfortunately, quite a number of my Facebook friends, judges, exhibitors and press became ill after the show.

Nevertheless, the show didn’t disappoint. Nearly 200 different breeds competed in conformation, agility, flyball, obedience and the many other events that were scheduled throughout the four days. In past years, I can remember waiting for photocopies of each day’s results to be placed in the “mail room” where the press used to gather. Now, results are posted on the Fosse Data website within minutes, and TKC also had a presence on TikTok, Twitter and YouTube. There was good coverage on TV via live-streaming, as well as numerous blogs and podcasts. Long gone are the days when dozens of press people had to jockey for the four computers provided by the organizers!

Spectators used to number more than 150,000 over the four days, but if you judge by the relative ease of getting around the five halls, there were noticeably fewer paying customers than in previous years. Trade stands were also a bit leaner, but you could still buy a dog collar, a garden shed or get your eyebrows threaded. As always, it was crowded around the stands and around the events rings where agility and obedience took place.

This year there were 1,843 dogs entered from overseas, with Italy at the top of the list with 265 entries. The Irish Republic followed with 244. The charming Hungarian Pumi had classes for the first time, and the Smooth Faced Pyrenean Sheepdog (never saw one) made its debut. Interestingly enough, the Harrier made a comeback, being shown for the first time since 1898! Some of the activities such as agility and flyball allow non-purebred dogs to compete, and one of the evening activities were the finals of the Scrufts Family Crossbreed Dog competition, featuring categories such as Most Handsome Dog and Prettiest Bitch. I can see every AKC show superintendent cringing at the thought, but the crowd loved it.

Also unlikely to make its way to our shores was the Gamekeepers competition, in which active or retired gamekeepers show working gundogs. They are judged on conformation, but with a special emphasis on their ability to do the work – a bit of a conundrum since all the dogs are meant to be “fit for function.” Of course, as we all know, working types are often quite different from their show-ring counterparts. Winner of the overall Gamekeepers competition was Helen Fox’s Flat-Coated Retriever Ruger, handled by Megan Fox, a view of things to come, as it turns out. 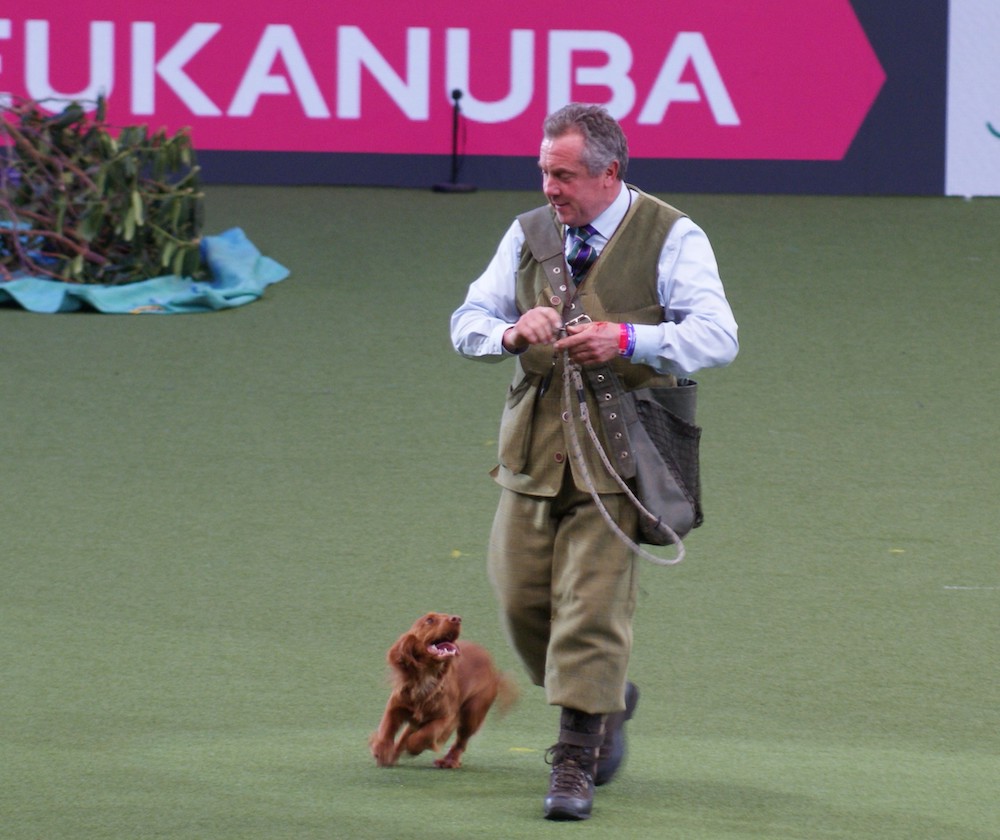 At the first day’s press conference, it was announced that The Kennel Club had donated £25,000 to supporting Ukrainian people and their animals, channeled through the FCI, which would best be able to decide where it would be most needed. The Kennel Club Charitable Trust matched that amount and more than £64,000 in additional donations came in during the four days. The World Dog Press Association, piloted by Karl Donvil, also raised more than 6,000 Euros, which were sent to one of our Ukrainian members to help provide dog food and other necessities to those who were unable or unwilling to leave the danger zone. If you are inclined to donate, you can find information on TKC site. 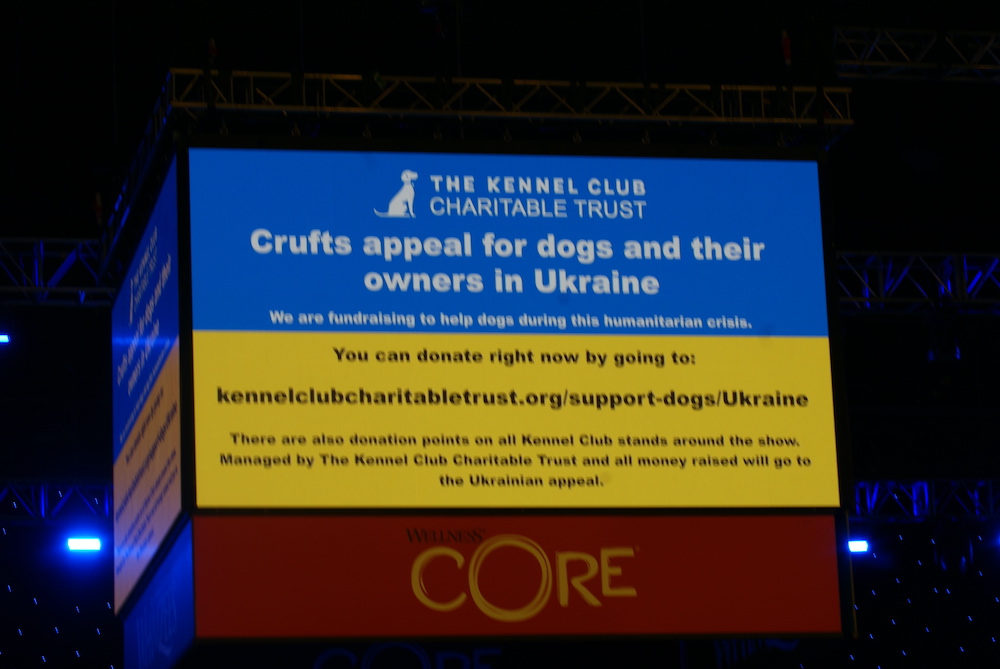 There were fewer foreign judges this year, with most coming from the Scandinavian countries. Mike McBeth, legendary Dandie Dinmont breeder, was the only North American judge I saw listed.

The seven groups are divided across the four days. Since Gundog entries are so large, there was only one group on Thursday. Sigurd Wilburg of the famous Kanix kennels judged the group and gave the top spot to the 6-year-old Flat-Coated Retriever Ch. Almanza Backseat Driver, owned by Rognhild Ulin and Patrick Oware and handled by Patrick. Retriever (Flat Coat), as they are called, are most often black, but Baxter is a liver. He hails from Norway. (I used to report results to four places, but as they are easily available on the Fosse Data and Crufts sites, I’m scaling back the detail a bit.) 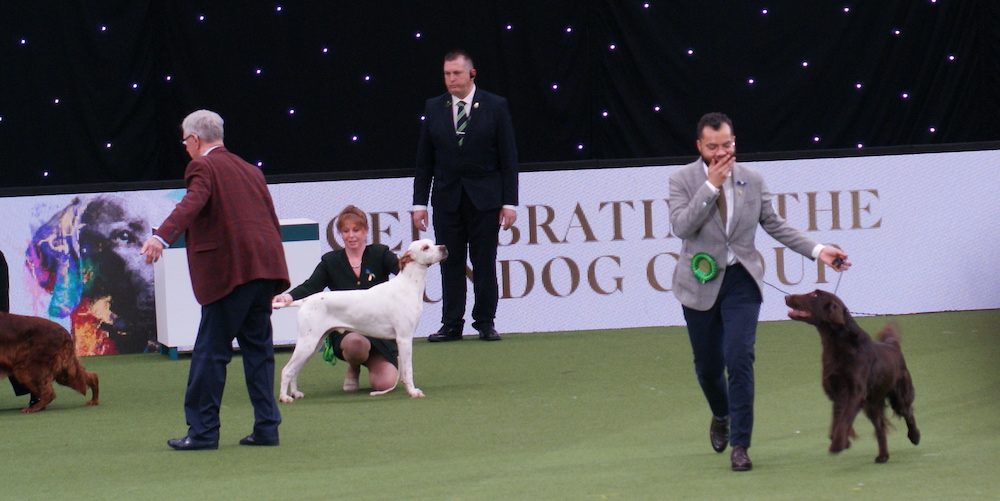 Day Two featured the Terrier and Hound breeds with old friend Paul Eardly doing the honors. From a lovely lineup, he chose the Irish Terrier Turith Adonis, owned and handled by John Averis. Hounds were judged by another friend, Gavin Robertson, whose PBGV Jilly was Best in Show in 2013 under another friend, Geoff Corish. Following her win, Gavin and Sara started a charity event called Jilly’s Walk in which fanciers and donors walked, in waves, from Birmingham to London in support of several canine and human charities. If memory serves, I believe that Gavin and Sara walked the entire way! They also began another charity event called the Pawscars, which is held on the night before the first day of the show. Sadly, due to lack of shows during 2021, and therefore award recipients, the event was cancelled this year. 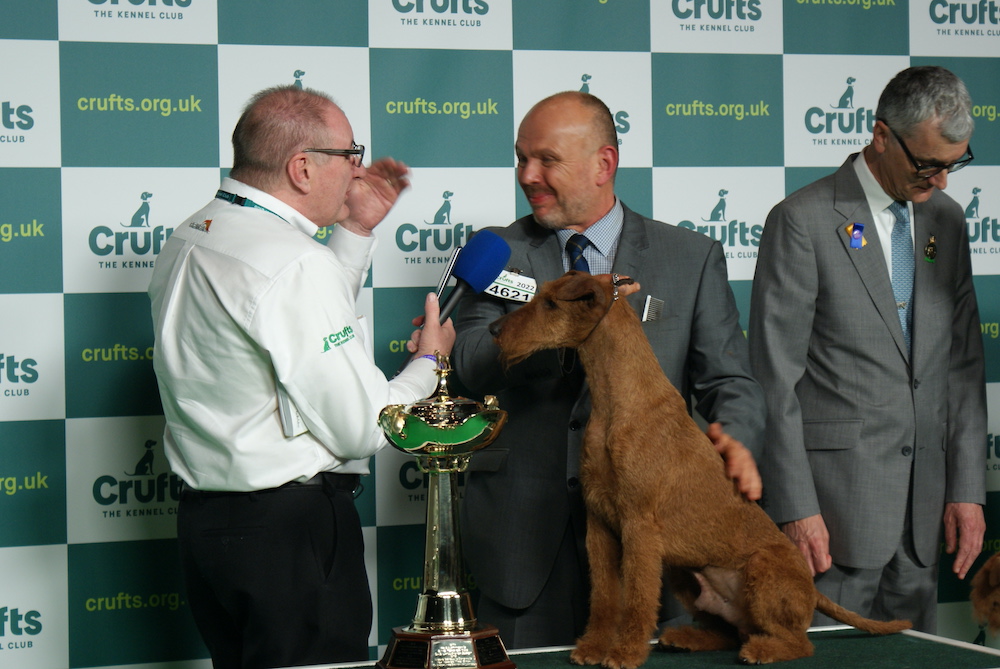 Gavin found his group winner in a stunning Greyhound from Germany, Ch. Ina’s Fashion Desirable. Aya is owned by Ina Koulermou. While I promised not to go on about all 21 group-placing dogs, I have to mention Gavin’s Group 2 dog, an absolutely stunning Whippet. 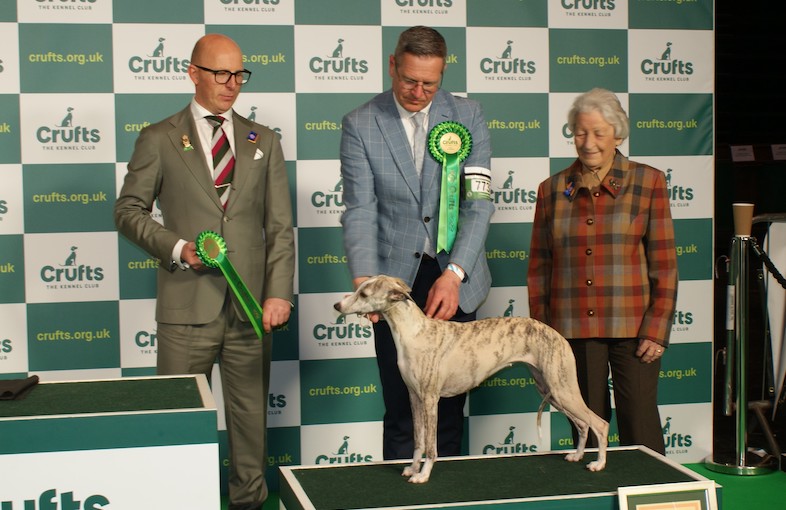 Saturday was time for the Working and Pastoral breeds. Robin Newhouse gave first place to the Siberian Husky Ch. Sibeadrift Keep The Love For Simavolk. Jeff Horswell awarded the Pastoral group to the Border Collie Etched in Sand by the Lake. Of interest to American readers is the Group 4 dog, the Puli imported from the U.S., Ch. Moonshadow Mud Bug. 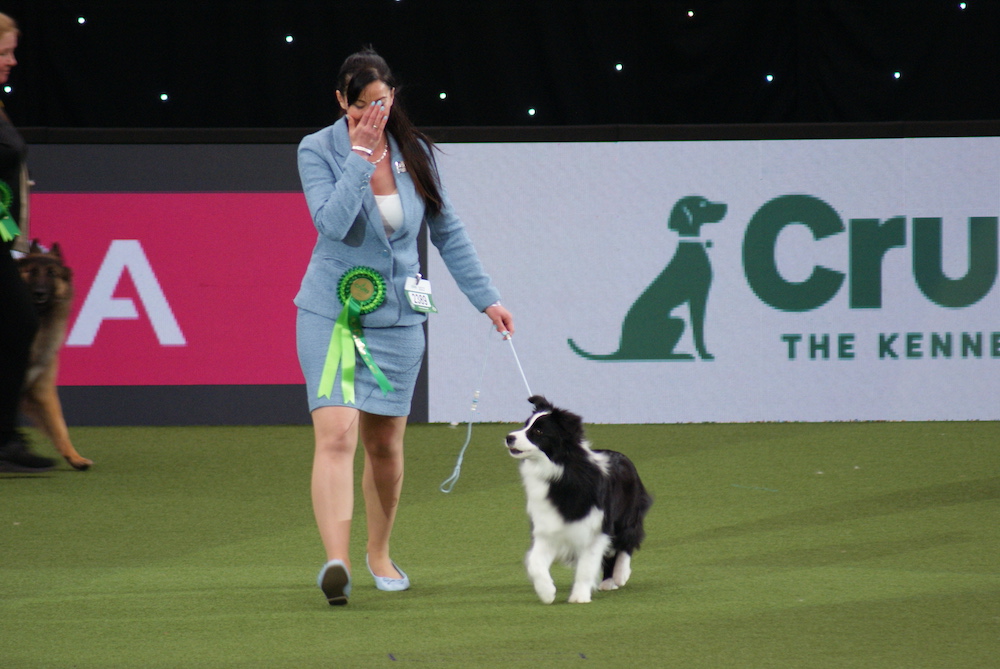 There is a good deal of entertainment in addition to group judging each evening, which included an opera singer (very good one), police demonstrations, working gundog demos and the old Friends for Life competition, now called TKC Hero Dog Award. If you were at the show when Friends for Life made its debut some years ago, I’ll bet that you remember it, as tears were flowing throughout the arena. This year’s winner was Pete Lewin and his Newfie Bob. Pete runs a non-profit suicide-prevention organization in which the dogs provide therapy for at-risk individuals. I wish that each year in the future they give out an award to each of the very worthy participants. The selection is done via online voting by the public, but clearly there is no “best hero dog.”

Crufts offers competition for vulnerable breeds, defined as those breeds having fewer than 300 puppies registered during the preceding year. I’m always interested in this competition, as two of my breeds, Dandies and Sealys, are on the list. David Guy, of Donzeata Brussels Griffon fame, selected a Gordon Setter as his winner, a bit surprising to us Americans, who don’t consider Gordons to be endangered. Some of the breeds, which must qualify at champ shows throughout the year, are no surprise, such as Dandies, Sealys and Otterhounds. Others are unexpected, such as the English Setter, the Norwich and the Old English Sheepdog.

Sunday was the day for Utility (Non-Sporting) and Toy. Bert Easdon, breeder of the legendary Yakee Pekingese, did the honors in the Toy ring. His Ch. Yakee A Dangerous Liaison won the group in 2003 and went on to BIS. His choice was the Spanish Yorkshire Terrier Ch. Royal Precious, aka Conan. All three Poodle varieties are included in the Utility group, judged by Mr. R.P. Oldham. He found his top dog in the lovely Toy called Waffle, Ch. Afterglow Agent Orange handled by Tom Isherwood.

After a lifetime of entertainment and a short intermission, the top seven dogs returned to the ring for the title of Crufts Supreme Champion. Stuart Plane had the honor of judging Best in Show. I’ve known Stuart for years, as his original breed was Scotties (as was mine). He started showing in 1975 and has made up 24 Stuane champions. He said in a recent interview that it’s been 40 years since he was in the BIS lineup with a Stuane dog. He is a retired teacher, but claims that his focus was always on the dogs and the dog shows. 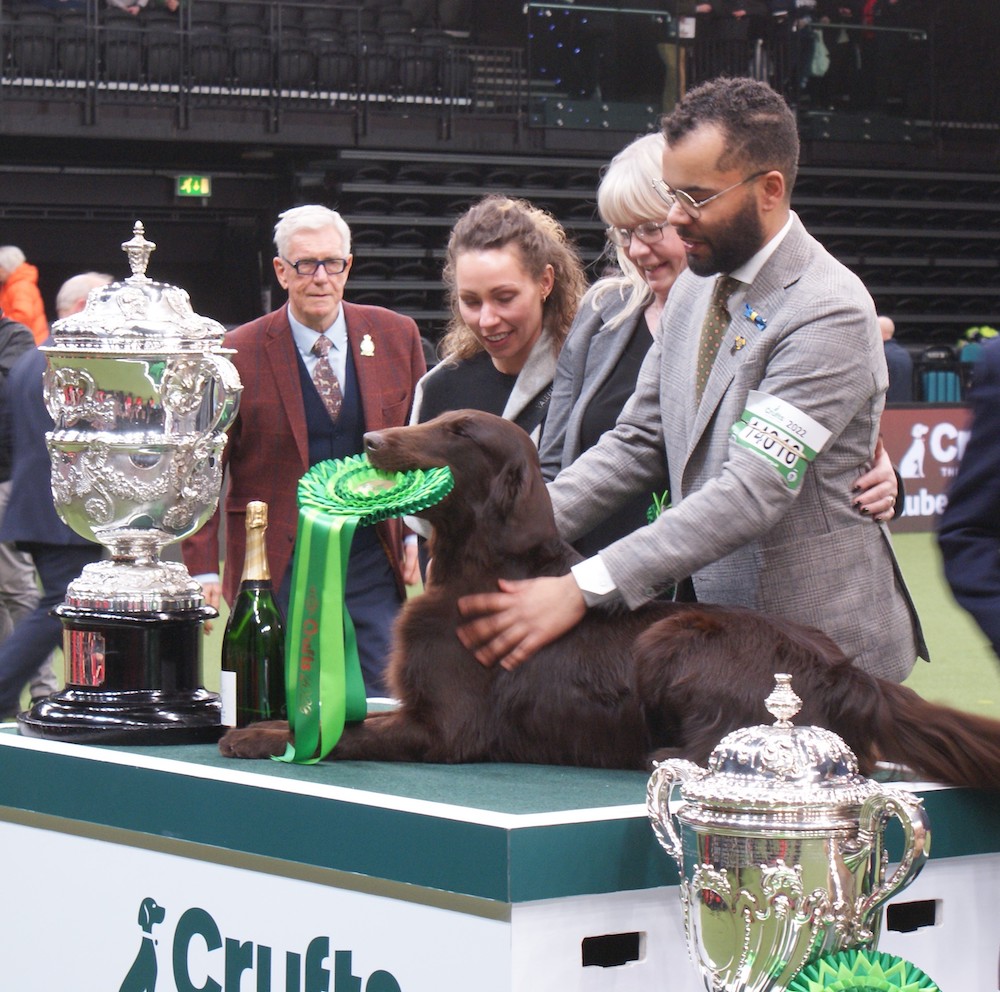 As a comeback show, Crufts didn’t suffer from lack of quality, as Stuart could have pointed in any number of directions for his Best in Show dog. He kept us in suspense for a bit, but then pointed to the lovely Flat-Coat, with the Toy Poodle in the RBIS spot. Flat-Coats are much more popular in England and Europe (especially Scandinavia) than they are here. Baxter is the first of his breed to win the big one since Ch. Sharglean Blackcap did it in 1980.

More than 5,000 volunteers, from ring crews to stewards, make this amazing dog show happen. Those of us in the press were sad to learn that the guy who makes the Press Center work, James Skinner, was ill and unable to be there. There were a few glitches that most likely arose because of James’ absence, but I’m hopeful they will be only a memory by next year. TKC press office continues to be a welcome refuge from the chaos, and a place where we can all rekindle friendships that, for some of us, have been going on for decades. 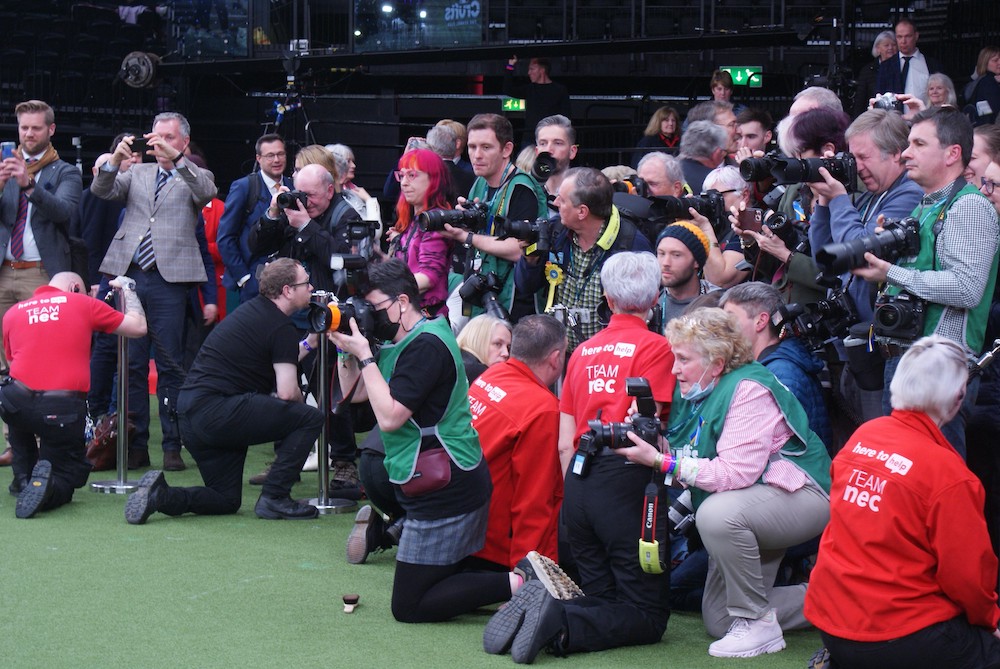 Congratulations to the owners, exhibitors, judges, press center and TKC staff, and to everyone who helped to make the 2022 comeback show one to remember. To our friends and fellow dog lovers in war-torn Ukraine, we are with you. We are hoping and praying for your safety and for peace.

© Dog News. This article may not be reposted, reprinted, rewritten, excerpted or otherwise duplicated in any medium without the express written permission of the publisher.
Fri, 04/08/2022 - 5:41pm