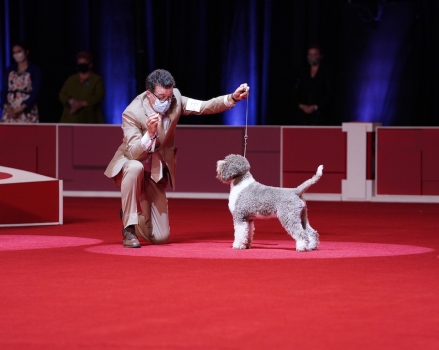 The Perfect Show for Imperfect Times

The AKC National Championship will never be forgetten, for so many reasons.
By
Desi Murphy

This was the 20th anniversary of the AKC National Championship show, a concept started by the living legend Ron Menaker.

The first show was held in Orlando in December 2001. For several years it went back and forth between Florida and Long Beach, California. In the beginning it was an invitational show for the top-ranked dogs, attracting 1,527 dogs its first year. When the show became open to all dogs, Long Beach and earlier venues in Orlando and Tampa could not handle entries of more than 3,000 comfortably. So the Orange County Convention Center in Orlando became the permanent venue.

This venue is perfect in nearly every way. The one small drawback is that Florida is in a corner of the country and is a long drive for the West Coast people. Most of us in the States can fly direct to Orlando. Having great hotels and restaurants so close by is a great plus. There is a huge outlet center nearby, which the foreign visitors love to shop at.

When COVID hit last March, nobody was concerned about the show being held. We all imagined that by summer the entire world would be back to normal. Over the summer and into the fall, there was some concern over whether the shows could happen at all. It truly was a miracle that the show could be held. I cannot imagine it could have been held at any other venue anywhere in the States. With all the travel restrictions, it was surprising there were more than 4,000 entries just in conformation alone. This was about only 20 percent less than the 5,000 last year. We still had a huge number of foreign exhibitors.

The three all-breed shows that start on Tuesday add greatly to the success of the long week. Plus there are some group shows and many, many specialties on Friday. This gives a lot of breeds five or six chances for majors. Many of the visiting foreign dogs made their championships over the long week. In some breeds, the foreign dogs dominated the classes.

Linda Rowell is cluster chair for the all-breed shows, and she has an army of people on the committee. Special mention has to go Lainey and Richard Bates. They start on Sunday picking up the judges at the airport and getting them to the two main hotels. Tuesday, Wednesday and Thursday they shuttle the judges back and forth to the venue. This requires several large vans and multiple trips. No easy feat with 50 judges to be taken care of.

Due to COVID about 20 judges had to cancel. Before entries closed, Linda had to replace well over a dozen of the foreign judges. Then several judges cancelled right before the shows and even after the shows had started. With all the restrictions it was a tremendous amount of added work and organization this year. The shows had to be laid out a bit differently for social distancing.

The AKC did not hold a dinner or other social gatherings. Still the judges had to be fed lunch all five days, and it was handled extremely well.

There was no Delegates meeting this year. Normally the delegates steward for the AKC show. This meant having to find around at least 50 other stewards. Many people had to be employed to controls the gates. Waivers had to be collected and wristbands issued. Everyone entering the building each day had to have his or her temperature taken. Everything ran smoothly and like clockwork.

I cannot remember ever being at shows where everyone’s attitudes were so positive. Nobody was complaining about all the restrictions. Everyone was just so happy we were having the show. It certainly was a great way to end the long, very difficult year for the entire sport.

Compared to Westminster, which has a limited champions-only entry and so very few foreign dogs, Orlando In Orlando get many overseas entries. In Bulldogs alone my Winners Dog, Select Dog and first Award of Merit were from Mexico. Tuesday I judged the Owner Handled Toy Group, and my winner – a Pom from Korea – went on to BIS Owner Handled.

Wednesday in the regular Toy Group I placed another Pom from Korea right behind “Wasabi” the Peke. The different Poms from Korea dominated the long week. Juan Carbonell from Mexico won the breed in Labs the first day with a class bitch. The following day he was again Best of Breed with a different bitch. On Friday his Golden Retriever bitch won the breed at the huge specialty. He then won the Sporting Puppy Sweeps with a young Lab bitch, and also won Owner Handled with a different Lab bitch.

The reason the shows in Orlando are so exciting is getting to see future stars from around the USA and foreign lands. Three years ago my group winner in the Puppy Stakes won the regular group at the AKC show. That same year my Terrier winner was a Wire Fox that has now gone on to win all over Europe. It was a great pleasure to judge the Puppy Sporting Stakes this year. The depth of quality was extremely strong. Several that did not place will go on to big wins in the future.

The Bred By competition at the AKC show is a great highlight of the weekend and indeed the entire year. The only other club that offers the competition is Montgomery County, which is an all-breed show, but only offers classes for Terriers. I wish some more of our prestigious shows would offer this competition. At the Santa Barbara Kennel Club, we hold the Breeders Showcase. It has worldwide recognition and we have some foreign breeders who come to compete. We really should be doing more to recognize breeders. Without breeders we would not have shows or even our beloved pets.

The Bred By competitions make us realize that so many professional handlers are also involved as breeders. This year all seven Bred By winners were with handlers. The final Bred By winner was Wasabi the Peke. He was Reserve Best in Show this year, won the entire show last year, and was the number-one dog this year.

This year we saw "Bourbon" the Whippet win the AKC show. It was just two years ago that her littermate, "Whiskey," won BIS, and was also Best Bred By in Show that year. Many of the winners of the Bred By groups also placed well in the regular groups.

It was interesting this year that nearly all the races for top dog all breeds and top dog in the different groups was decided before we got to Orlando. Quite often it has gone down to the last show of the year. The only even close races were in the Working and Non-Sporting groups.

Even though the entry was smaller this year, the competition was stronger than ever. Every top dog in the country was present. In previous years some of the top contenders went to the shows in Pennsylvania instead of staying in Orlando, but this year all the top winners were competing together.

This year with such fewer shows, the winning dogs were usually at the same shows, not having a choice of shows to go to. This meant nobody was following judges. With all the overloads the breed judges sometimes were completely different on a four-day cluster.

Wasabi and his handler were quite often at the same shows as Bourbon. David and Wasabi made it to 96 shows, and Bourbon a few more. In normal years some of the top dogs went to close to 175 shows. Also both the Whippet and the Peke did not fly to any shows, driving instead. The race for top dog never got in the way of the very close friendship between the handlers. On several weekends David, Cheslie and Justin were even traveling together. A perfect example of dogs come and go but real friendships last forever. In previous years we saw some friendship break up over the races for top dog. We also have to remember that the truly great dogs are remember for their star quality, not their records.

Many, many parent clubs had to cancel their nationals this past year. The Great Dane Club of America held their Top 20 in Orlando late Friday afternoon. The thought was some of the older dogs would be starting to lose their bloom a year from now. It worked out very nicely, and I greatly enjoyed seeing many of the Top 20 for the first time in the flesh. Normally nobody see all the top winners from around the country at the same time, except at a national.

It was the last show for most of the very top winners. Since Westminster is being delayed until June, many felt this was the place to retire. We did see two rising stars winning their groups at the AKC show: The Herding Group was won by an Australian Shepherd bitch shown by Jamie Clute. She had finished by winning the group from the classes. And the Sporting Group was captured by the Lagotto Romagnolo shown by Phil Booth.

"Orca" the Lagotto only arrived in the States at the end of July. She had done tremendous winning all over Europe and was second in the Gundog Group at Crufts this past year. At some point in September she won a very strong group under me and again the next day under Steve Keating. Going into the Orlando week she did have three Best in Shows under her belt. She will open the doors for others of this newer rare breed. In the Puppy Stakes a youngster from the same kennel in Croatia that bred Orca won the breed under me and placed in the group.

The long week in Orlando was not quite as much fun as previous years. But all attending enjoyed it so much. It was great seeing friends from all over the world and seeing so many great dogs. It truly was a miracle being able to have the show this year.

It is now more than three weeks since we all returned from Orlando. We have heard of only a handful of people who got sick after the show, and they probably got sick from the airports, restaurants, shopping and normal living. This was one year we will never forget, for so many reasons.

© Dog News. This article may not be reposted, reprinted, rewritten, excerpted or otherwise duplicated in any medium without the express written permission of the publisher.
Wed, 01/06/2021 - 6:33pm