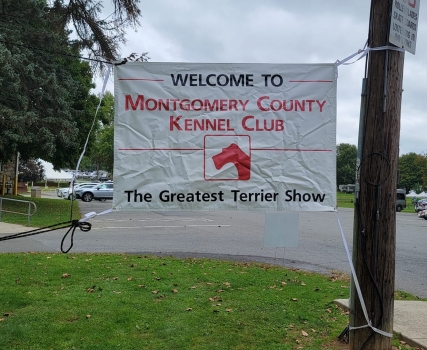 The Montgomery County Kennel Club, held this year on October 10, is truly different than any other show in the world: Though it is licensed as an all-breed club, it only offers classes for Terriers, and is basically made up of national specialties of many Terriers. This year, 23 different Terriers held their nationals with Montgomery, plus three clubs held supported entries. There is no other weekend where one can see so many nationals.

Formally, it is a four-day weekend, with Hatboro on Thursday and Friday, and Devon on Saturday, leading up to Montgomery on Sunday. Several of the Terriers also hold concurrent specialties on the weekend. And every five years, Morris & Essex is the lead-in to the long weekend.

Because of Covid, the normal venue was not available this year. It is never easy to do a show in a new venue, but the committee made it work so well for everyone. The show was held at the Macungie Memorial Park, which has hosted other shows for many years. Hatboro also lost its grounds and also used Macungie Park. This meant that Thursday, Friday and Saturday were all the same location.

Macungie was about 70 miles from where Morris & Essex was held, so it meant a late night for the people who did not leave M&E until around 8:30 p.m. The Devon venue at Ludwig’s Corner was about an hour from where most people stay for Hatboro and Devon. Hatboro limited their show to 2,200, so some missed the limit. Devon, although being on Saturday, is always the smallest show of the weekend. Several years ago it was cancelled due to terrible rains.

When many of the breeds had enormous entries at Montgomery, it meant holding their sweeps the day before at a separate location.

Terriers, like many breeds, do not get the entries they once did. At some smaller shows, there are only 25 or 30 Terriers.

This year, Montgomery drew 1,317 dogs with 1,604 entries. The entry was only slightly less than the last show in 2019. Twenty years ago, in 2001, 10 of the top breeds accounted for 1,489 dogs, and this year these same breeds accounted for only 717, or less than half. Because of the hand-stripping and overall presentation, Terriers are a dying breed. Even many, many handlers cannot condition a Terrier. There are certain states where nobody can even strip a Terrier. Thank God for all the great handlers who have come here from Mexico. The majority of Terrier handlers are Mexican.

Montgomery has always been a breeders’ show. Breeders debut their young stars over the weekend. This year, we saw many young class dogs that will be the future great winners of their breed. In 1994, 27 years ago, Amy Rutherford unveiled “Dove,” Ch. Aimhi Type Cast. He won the breed from the classes under Bill Potter and was second in the group under Harry O’Donoghue. This was the start of this Smooth Fox’s great career.

Now, 27 years later, Amy unveiled a “Dover” daughter that won the breed from the classes at Montgomery and also one other day. The litter brother was also Winners Dog.

A Welsh Terrier bitch from Europe won the group at Devon from the classes. At Montgomery, a class male that was here from Japan won the breed. In Wire Fox, a “Sky” son finished at Morris & Essex and won the breed several days. His mother, “Sky,” Ch. AfterAll Painting the Sky, was Best in Show at Montgomery in 2013 under Roberta Campbell. In 1982, we saw Eddie Boyes go BIS from the classes with the Lakeland bitch Jamboree Jubilea. The Mini Schnauzer Mankit’s To the Moon went BIS from the classes in 1968 and repeated the win in 1969. We always say one show will not make or break a dog, but Montgomery is the exception to the rule.

Montgomery and the AKC National Championship are the only two shows that feature the Bred-by Group. At most shows a dog has to be shown in Bred-by, but at these two shows they can be shown as specials. This year there were 525 dogs entered in the Bred-by competition at Montgomery. This was 40 percent of the total dogs competing. Many of the dogs competing in the Bred-by group are also dogs that have gone BOB. I wish more shows would feature a Bred-by competition the same way Montgomery and the AKC show do.

At Santa Barbara we have the Breeders Showcase. It is an evening event with a free dinner and drinks for around 1,300 guests. The super-talented artist Fan Yu is commissioned to do a bronze of the winning pair. The Breeders Showcase attracts people from all over the U.S. and some foreign breeders.

Normally Montgomery attracts hundreds and hundreds of foreign visitors from all over the world. Due to Covid and travel restrictions, this year was the exception. We did have many foreign guests, but the huge numbers were not in attendance. Normally the catalogs sell out early in the morning, as the foreign visitors buy two or three to take home to friends. This year a lot of catalogs went unsold, and were given out for free at group time.

Montgomery saved a great deal of money this year by sharing the grounds with the two Hatboro shows. This meant Montgomery only had to pay a third of its normal tenting costs. Financially it works well for the national breed clubs: They do not have to pay for a venue, tenting, etc.

Not every handler can go to every independent national, but every Terrier handler comes to Montgomery with a very large string of dogs. Because flying dogs has become so difficult, many handlers and exhibitors drove from the West Coast. Sorry to say, the Canadian exhibitors could not drive over the border this year.

Geir Flyckt-Pedersen had the honor of judging Best in Show. Geir has been involved with Terriers his entire life, starting with his famous “Louline” Wires in Sweden before moving to England, then to the States. Many Wire breeders throughout the world started their lines from Louline. Geir and his late wife also bred English Cockers and had Whippets as well. In later years, Norfolk became their passion. For any Terrier judge the greatest honor is to judge Best in Show at Montgomery. It was a great pleasure for me to judge Best in Show at Morris & Essex, but just as thrilling was doing the Terrier Group at M&E in 2015. It is a great thrill to judge any of the breeds over that magical weekend.

In 2010, we saw Kim Rudzik winning Best in Show with the AmStaff bitch Ch. Castle Rock’s Sbigstaff Mad About You. Then in 2017, Kim went BIS with Ch. Roadhouse’s Life of the Party. This year, “Louie” came back as a veteran to go BIS again. Kim also won the group at M&E this year with “Louie.” Kim has done so much to put this wonderful breed in the spotlight.

Second – and Reserve Best in Show, because this is an all-breed show – was the Cairn Ch. Hjohoo’s Hjo Want It All. Gabe Rangel shows her for Victor Malzoni. Victor won BIS in 2015 with the Wire Ch. Hampton Court’s Monte Cristo, also in 2013 with “Sky” the Wire and in 2012 with the Lakeland Ch. Iron Van Foliny Home.

Fourth went to the West Highland White, GCh. Crystal Boy De La Pomme. He is shown by Rebecca Cross fir Phavida Jaruthavee, Fred Askin and Fred Melville. I first saw this Thailand-bred dog at the World Dog Show in Amsterdam in August 2018. He was the Junior Winner. He won the Terrier Group at Westminster this year, and has built a great record. He is the only Westie I have awarded a BIS, and shows and moves like we rarely see in the breed. He also placed in the group at Morris & Essex.

I have been going to Montgomery since 1961, and each time it is the highlight of the year for me. We all could write a book about our memories of Montgomery. Who will forget the years we were in mud over our ankles, and lost our shoes in the muck? Peter Green won his first Best in Show at Montgomery 56 years ago and still loves the show more than ever.

Because of Covid, the committee was challenged with many changes this year. Bruce Schwartz the president and Ken Kauffman have a huge committee of people working so hard to make everything run like clockwork. Big Harry Miller with his great crew takes charge of parking and traffic control. Many non-members come even from the West Coast to assist with lots of chores.

Karen Wilson has the honor of judging Best in Show at Montgomery in 2022. She has judged at all the prestigious shows, but I am confident this will be her most cherished assignment. Now we pray for the same wonderful weather we enjoyed the entire weekend this year. Next year hopefully Covid will be behind us, and all our overseas friends can join us.

© Dog News. This article may not be reposted, reprinted, rewritten, excerpted or otherwise duplicated in any medium without the express written permission of the publisher.
Thu, 11/04/2021 - 9:54pm