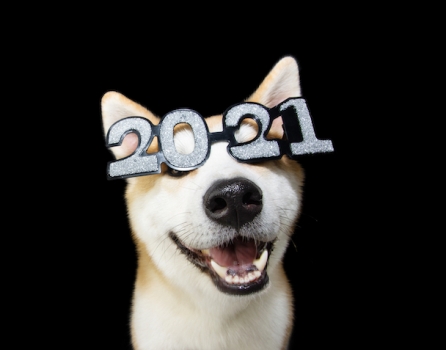 With 2020 in the rear-view mirror, a look ahead to the new year

2020 was by all accounts the worst year in our lives. The ordinary things we took for granted without a second thought became the things we most wished for. Our purebred dog community, like the rest of the country, suffered losses emotional, physical and financial that struck us to the core. We lost Matthew Stander, co-founder of DOG NEWS, whose contributions were paramount to the success of our joint venture. He is and will remain an irreplaceable part of our story. On a personal level, I lost my life partner, and his passing has affected me in ways I would have thought unimaginable. Friends and acquaintances passed away, some from Covid-19, some not. Bad news seemed to be the only news during those long months. DOG NEWS suspended publishing in March as dog shows were cancelled like cascading falling dominoes. Slowly, ever so slowly, some clubs held events, and DOG NEWS started to publish again in August.

2021 begins with DOG NEWS starting its 37th year of publishing. Vaccines have been created by several pharmaceutical companies to fight Covid-19. While the established dog-show calendar has been upended by many date changes, shows will be held, maybe not on their traditional dates, around the country. In these remaining winter months, shows in certain colder areas of the country will or have been cancelled due to their venues. The American Kennel Club has been very flexible in allowing these show-giving clubs to change states, dates and venues, causing some confusion. One of the more positive steps they have taken in this pandemic. This flexibility has allowed shows like the Westminster Kennel Club to move from its indoor February date in Manhattan to an out-of-doors June date in Westchester County.

After basically being homebound for ten months, the distribution and rollout of the Covid-18 vaccine around the country comes as a great relief to many. As the population gets inoculated, we will see more and more events being held. That doesn’t mean that you can ignore the wearing of masks, social distancing and washing your hands often.  One of the upcoming events we are looking forward to is the well-deserved and overdue recognition of Ron Menaker and his decades of work on behalf of the Dog Museum with the “Virtual Night with the Museum.” It will be held on Friday, February 12th, between 8 and 9 P.M. What a wonderful way to honor Ron and support the Museum.

© Dog News. This article may not be reposted, reprinted, rewritten, excerpted or otherwise duplicated in any medium without the express written permission of the publisher.
Wed, 01/06/2021 - 6:16pm