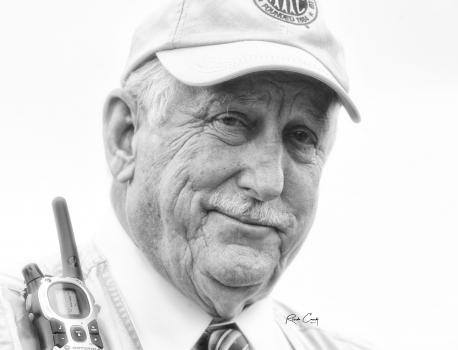 The Scottish Deerhound bitch was unimpressed.

A rubber carrot landed with a thud on the floor several yards in front of where she stood, perfectly stacked, on the podium. She all but yawned. A second toy tuber sailed by, only to be met with more diffidence, if that was even possible. Then came the noisy Nemo pull toy, a ploy so obvious the cynical Sighthound wouldn’t even dignify it with a glance.

Finally, after a little cajoling and a flung wad of her handler’s bait, the Deerhound relented. Drawing herself up on her front legs and cocking her head at attention, she was now ready for her not-so-close-up with John Ashbey – keeper of the carrots, necromancer of the Nemo, wrangler of recalcitrant ribbon winners. In other words, the dog-show photographer.

Just as quickly as Ashbey tucks his props back into the pockets of his signature khaki vest, we hasten to add that this isn’t just any dog-show photographer: This year marks a half-century behind the camera for 74-year-old Ashbey of Gilbert, Pennsylvania, who has also been the official photographer of the Westminster Kennel Club show since 1977. He has photographed most of the great competitors of the latter half of the 20th Century, staging the Westminster-winning German Shepherd Manhattan in front of that glittering skyline (an idea that he says Hatter’s handler, Jimmy Moses, scooped and executed himself with a cut-out of the dog), or posing then-handler Perry Phillips on the famous “Rocky” steps in front of the Philadelphia Museum of Art.

It was perhaps inevitable that Ashbey would gravitate to the world of show dogs: His father, Frank, was the kennel manager at the famous Ardlock Acres Collie kennel in Webster, Massachusetts, where Ashbey was born in 1944. A decade later, the elder Ashbey decided to hang out his shingle as a professional handler, though he was still known for the Collies at the end of his lead, including Ch. Fancy Hi Honeybrook, the only Rough Collie to place among the top 10 all breeds, way back in 1958. Along with his older brother David, Ashbey helped his father groom and tend to the dogs at the shows, sometimes taking them into the ring, as well as competing in juniors.

Like his late brother David, Ashbey was enamored with photography as a teenager. Both joined the military in their 20s, becoming Navy photographers. After four years of photographing pilots on their missions to Vietnam, Ashbey left the service in 1967, and a year later he found an apprenticeship with another second-generation dog man, William Gilbert. A former handler who had gone from “leash to lens,” as one of his friends described it, Gilbert covered dog shows in the Northeast, from Massachusetts to as far south as Virginia, including marquee events such as Westminster, Montgomery and the American Spaniel Club. A former Navy photographer himself, Gilbert elicited expression by barking at the dog or throwing film packs, a harbinger of the carrot-tossing to come.

By 1974, Ashbey had struck out on his own, having seized on a new innovation that had started to seep into the dog-show world like the we’re-not-in-Kansas-anymore scene in the “Wizard of Oz” – color photography. Two years later, his longtime mentor Evelyn Shafer passed him her baton: Ashbey agreed to shoot all the Westminster winners in color, but Shafer got the credit. The iconic female photographer, known for her teetering heels and uncanny instincts in the darkroom, was able to retire on a high note, and Ashbey started shooting at the headline show that he had first attended as a five-year-old.

But the advent of color film was nothing compared to the technological shift that Ashbey has seen in recent years as the dog world has moved into the digital age.

“It’s probably harder now,” Ashbey reflects. When dogs were still shot on film, the printer did all the color correction, cropping and retouching. Today, all that detail work – including removing a distracting slinger from the mouth of a drooling Mastiff, or magically erasing the tongue of a panting Pug – falls to the photographer.

There have been other concessions to the march of time. “I’ve gone to the tripod because my knees are bad,” Ashbey says. “I can’t get up anymore.” He mourns the retirement of his old Hasselblad, the big, black, Swedish-made camera favored by postwar photographers. “Now,” he says with a twinge of nostalgia, “we no longer look through the lens.”

But while the technology has changed, the dogs haven’t. Handlers still make the same mistakes, chief of which, Ashbey says, is not holding a dog’s head high enough when stacked on the platform. And in some respects, knowing the most flattering angle at which to photograph a dog requires as much breed-specific knowledge as it takes to judge one: Bulldogs, for instance, are shot at three-quarters, all the better to show off their width of head and spring of rib, compared to, say, a Great Dane or Doberman, which calls for a straight-on side profile.

The very best handlers know how to position and present their dogs to best advantage, minimizing their flaws and promoting their virtues, and it’s no different with talented show photographers. The rule of thumb when taking win photos is to shoot into the dog’s shoulder. “But if you have a dog with a narrow chest, you shoot higher,” above the shoulder, to give the appearance of more breadth, Ashbey explains. Cropping also affects perception: A horizontal crop will make a cobby dog seem longer, while a tight crop can visually shrink an overly long dog.

Dachshunds, with their long, slow-slung silhouettes, are perhaps the toughest dogs to photograph to advantage, Ashbey muses. And, of course, the most challenging dog of all is an untrained one.

In terms of success, as with all things, the proof is in the pudding: Ashbey says he has only a seven percent return rate on photographs. Pretty soon he expects that hard-copy proofs will be replaced by electronic ones, but not until show photographers figure out a logistically sensible way to post them with restricted access. Otherwise, “anybody can see and buy the photographs of your dog,” he says, adding that he had to pursue a website that had copied an Akita portrait he had taken and was using it to urge visitors to not acquire the breed.

Today, Ashbey has no plans of retiring, working some 170 shows a year with the help of his daughter, Andrea, who joined him about five years ago. He’s always had dogs, from the Collies of his childhood and the Boxer that accompanied him in the car as a teenager, to an assortment of other breeds, including Portuguese Water Dogs, Rottweilers, Corgis, Dalmatians (his first wife bred them) and, currently, Border Terriers.

As much as things have changed in the dog sport, this much has never wavered: “We’re a dog-show family,” Ashbey says. “And we all help each other out.”

And now, more than ever, he says, this piece of time-tested advice still holds:

“Don’t ever buy a dog from a picture,” John Ashbey warns. And he, who can transform a chump into a champ with the practiced throw of a squeaky carrot, knows that better than anyone.

© Dog News. This article may not be reposted, reprinted, rewritten, excerpted or otherwise duplicated in any medium without the express written permission of the publisher.
Sun, 12/06/2020 - 7:36am