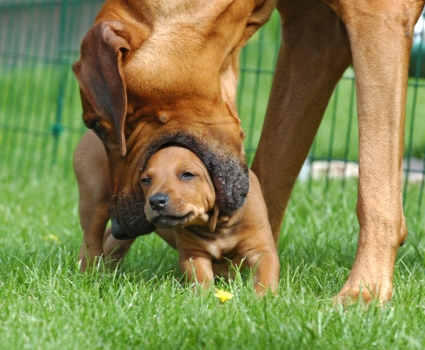 Dogs can teach us some very valuable —to say nothing of humiliating — lessons
By
M.J. Nelson

Life has a way of telling us when something wasn’t a good move. As children we learned that hot stoves burn, a teased cat bites and scratches, and if you jump off the sled before it hits the tree, you may wind up a bit bloody, but likely unbroken.

If you went on to college after high school, there were times when you had to learn to say no to a party invitation and actually open the books. Another unpleasant lesson was that it wasn’t smart to get so inebriated that the following morning, in addition to a world-class hangover, you had absolutely no recollection of what had occurred the previous evening.

On graduation and entering the real world, some of the discoveries I made were that it’s wise to obey instantly, maybe sooner, any order issued by a drill instructor. That it’s unwise to refer to a federal judge as a moronic nincompoop while in his courtroom, even though the description is accurate. And, if an FBI agent tells you that you need to leave the site of a getting-uglier-by-the-minute protest demonstration on which you are reporting, you’d better do so before he determines that, for your own safety, he’s putting you in protective custody.

But all of these lessons, unpleasant though they were, have been equaled by some I and others have learned from and with dogs. These “educational opportunities” usually were not just painful but also were accompanied by humiliation and/or financial loss.

For me, most of them occurred afield.  For example, I once discovered it was unwise to assume that a half-submerged tree spanning the creek I needed to cross to get to the Brittanys on the other side – one on point and the other backing that point – actually reached the opposite bank and wasn’t rotten. Because it didn’t and it was.

In 49 BC, according to Plutarch’s writings later recounted by William Shakespeare in iambic pentameter, Julius Caesar dithered on the bank of the Rubicon River before he made the fateful decision to cross it, which put him in irreconcilable opposition to Rome’s Senate.  Thus we have the expression “crossing the Rubicon,” which is synonymous with passing a point of no return. Like Caesar, I “wavered much in my mind” and sought counsel from my hunting partner when “purposes fluctuated most” about whether to cross the creek using the tree as a bridge. Unfortunately, my partner’s “counsel” when asked if he thought the tree reached the opposite bank was a very non-Shakespearean, “Damned if I know.” 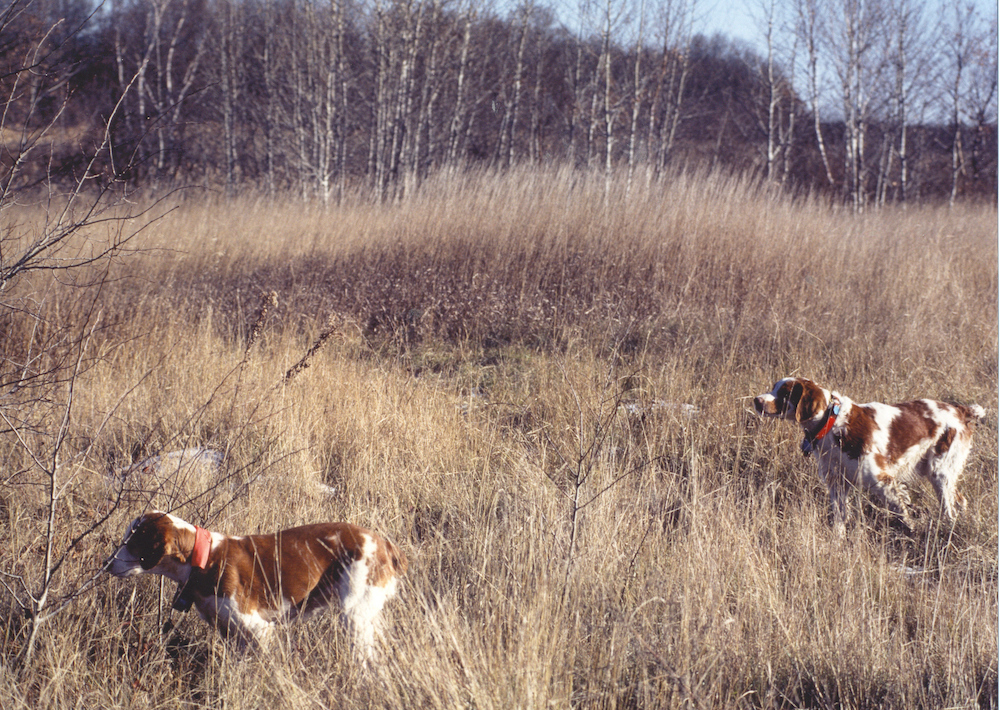 With the partially submerged tree, the “Rubicon,” or point of no return, didn’t become obvious until after it collapsed and dumped me waist-deep in creek water that was just a degree or two north of freezing and at the deepest part of the creek. By that point, the only good option, as it was for Caesar, was to press on, in this case to the other side of the creek to where the Brits were still patiently holding the point and back – all the while, I suspect, trying to avoid flushing the bird by rolling around on the ground and laughing hysterically.

My hunting partner, no surprise, was not exhibiting any such restraint, and at that moment, I knew that here again was to be a tale “Told by an idiot, full of sound and fury, Signifying nothing,” that would also reappear, ad infinitum, but with increasing embellishments, whenever the two of us were present and there was an audience.

While sometimes the reminder that something wasn’t a good move is immediate, at other times the realization that “Gee, that wasn’t very smart” is delayed. That was the case for a friend of mine at her breed’s national specialty a few years back.

She had one of the top conformation dogs in the breed who also had hunt test titles, so a specialty win would be a definite plus. If there is ever a “sure thing” in horse racing – or dog showing or for that matter – when any animal is part of the equation, his winning this particular specialty was it. Absolutely everything was stacked in dog’s favor. The judge had previously awarded the dog several group wins and a pair of Bests in Show. The dog had been second or third for the entire year in the national rankings for the breed. What’s more, due to the somewhat remote location for that year’s national specialty, three of the dogs that would have provided the stiffest competition were not entered.

On the day of the specialty, she walked her dog for close to an hour in the morning. While he had watered roughly every weed in the county, he had declined to take care of his other toilet duty. An hour or so before the scheduled start of competition, she decided to give him one more chance. Again, despite a long walk, he wouldn’t take care of that important detail.

Finally, in desperation, as they walked along a small wooded area on the edge of the show grounds, knowing that doing his business on leash had sometimes been an issue with him, she released him. The dog happily bounded off into the woods, and she caught a glimpse of him as he began preparations to complete the mission.

She waited the usual amount of time required to complete that operation, but when he failed to reappear, she became a bit concerned. Just about the time she started into the wooded area to look for him, to her horror, she heard a very loud splash. Her water-loving dog had found water, and it was not a pristine pool. Just as she arrived, the dog emerged covered with mud and an odious green slime that was gag-inducing even from a good ten feet away.

Not content with anointing himself with the execrable slop, he proceeded to shake it off on his owner’s show clothing before she could get out of the way. 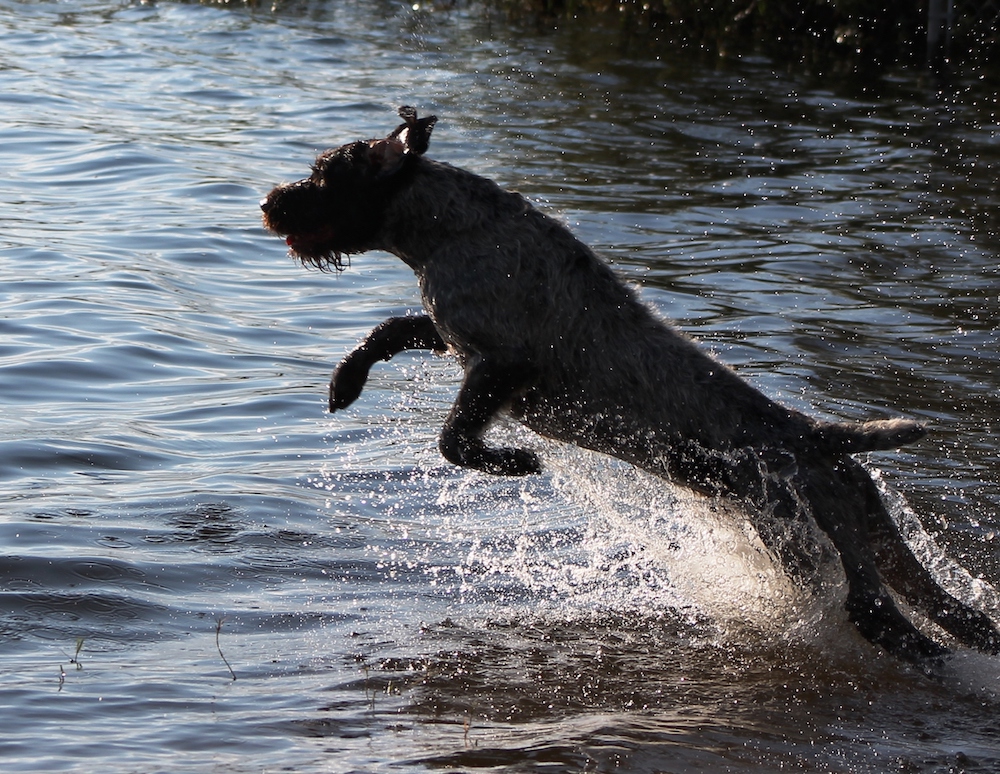 Although she hustled the dog back to her truck and made strenuous efforts to clean him up as well as getting the muck off her clothing, it was an impossible task. While she succeeded in getting rid of the green slime, the stink remained, and it was simply too god awful to even contemplate putting the dog in the show ring. So, a shoo-in for BOB turned out to be a no-show at that year’s specialty.

Adding the proverbial insult to injury, when her fellow competitors found out why her dog had not been in the ring, instead of the sympathy she thought she deserved, all she heard were howls of laughter as she described the efforts to get the dog and herself cleaned up in time for the judging.

Another friend who is seriously into obedience and owns several dogs that have achieved their obedience trial championships recalled one of her earliest OTCH dogs who had a very rigid set of standards as to what was acceptable from his owner and what was not. Through eight trials in Novice, Open and Utility, he had received only one red ribbon to go with the green ones. The other seven had been blue. Clearly she had a fine obedience dog who liked the sport.

Until, that is, one day when he was playing around while they waited to go in to try for the last qualifying score for his title in Utility, and she got on his case just a bit. She said she should have recognized that he was insulted by his body language and made up with him, but she was focused instead on the task at hand. 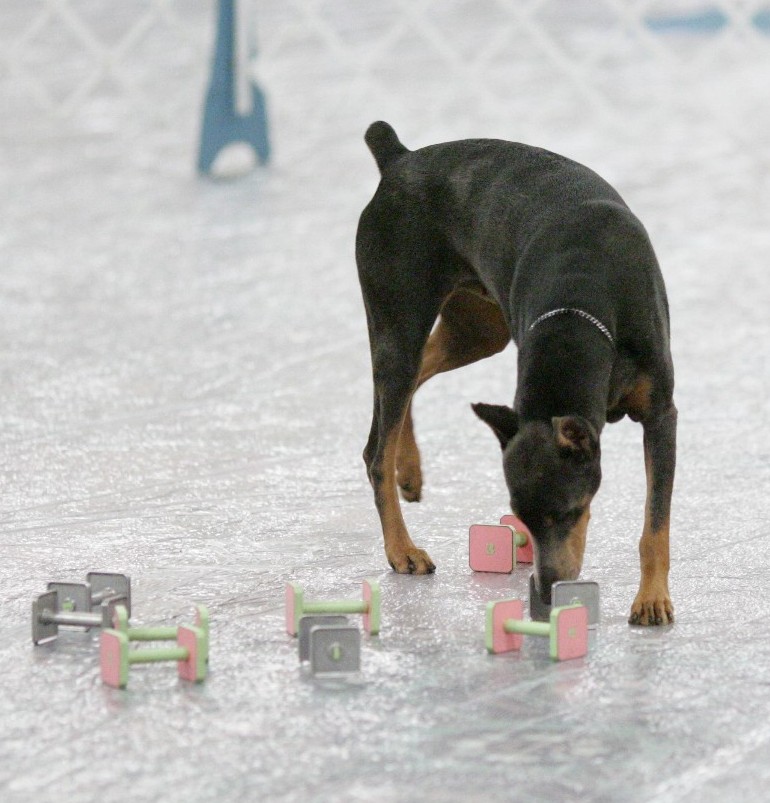 He did all the exercises perfectly until he got to the directed jumping. En route to the bar jump, he slid to a halt a few feet from the jump. He looked at his owner, and she swears he smirked at her. Then, he walked up to the bar jump, slid his nose beneath the bar and flipped it off the pegs.

Having accomplished his objective, he backed up a few steps and jumped between the two standards, easily clearing the height at which the bar had been set, and came back to his owner to sit in a perfect front. The judge was in hysterics, and the gallery was rolling around on the floor with laughter.

A couple of weeks later, they again tried for that elusive last leg. On the article search, he picked up every article except the correct one, throwing each one out of the ring before picking up the right one and returning to her.

The next time, it was the gloves on the directed retrieve. He went directly to the glove to which he was sent, picked it up and then walked over to the next one. He dropped the correct glove, picked up the other one and tossed it out of the ring. He did the same thing with the third glove before once again picking up the correct one and giving it a serious shaking before returning to his owner.

As had happened on the two previous occasions, the gallery was rocking, and the judge was practically falling down, he was laughing so hard. This went on for three more events, each time with the dog picking a different exercise to spectacularly botch, before he apparently decided he had made his point. She said she got the message, costly though it had been, because thereafter, she never corrected the dog even slightly at an obedience trial.

Another friend who has Airedales was running his dog in junior level hunt tests. When he walked up to the line for the water test, he removed the leash, thinking to restrain the dog by holding his collar when the bird was thrown. But having not seen the test dog run and being first to run, he needed an explanation of the test from the judges. As he chatted with them, the dog spotted the gunners, one of whom had a bird in hand in preparation to launch it into the water for the test.

Not waiting for a command, a shot or anything else, the dog took off in the direction of the water, the gunners and the bird. Being in no position to absorb the dog’s forward lunge as he held on to the dog’s collar and talked with the judges, the owner went airborne from the dog’s catapult forward, causing him to land on the edge of the marsh in what hunters call “loon s***.” 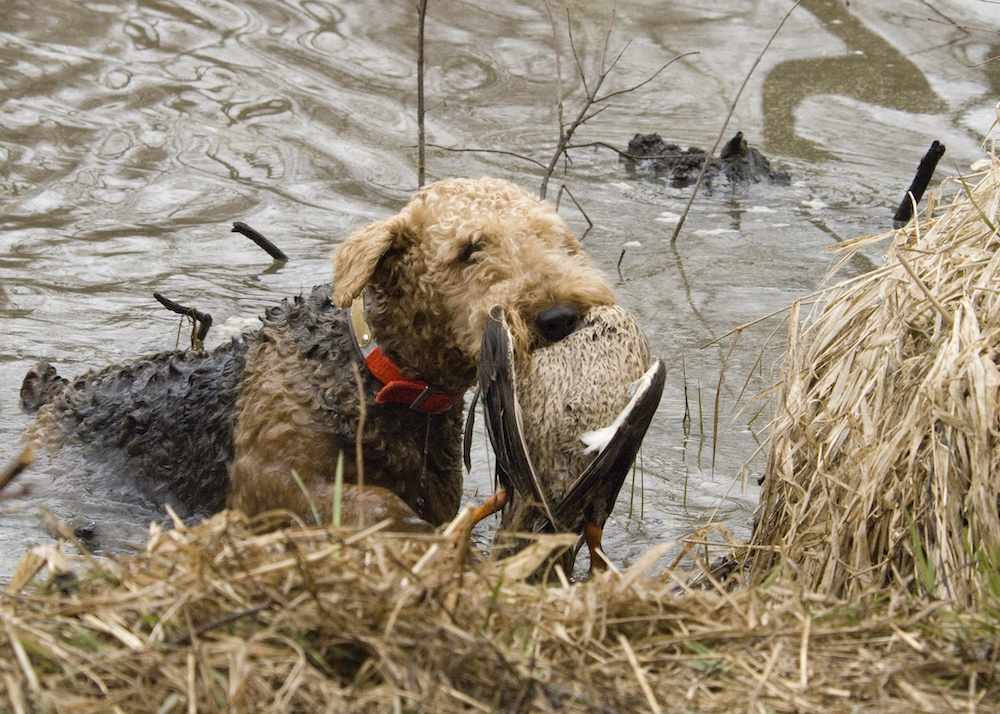 Covered in mud and reeking of hydrogen sulfide and who knows what all else from the decaying plant matter, the unlucky Airedale owner still had to run the test. So, with the roars of laughter from the gallery in the background and the barely suppressed giggles from the judges and the marshal next to him in his ears, he ran the dog in the test. But it did not escape his notice that both judges made it a point to stay as far away from him as possible. Just how sensible that distancing was became obvious when three trips through the washing machine – including one with a compound designed to remove skunk odor – failed to eliminate the stink from his clothing.

So, when one of those “that wasn’t a good move” moments happens to you, despite thinking you may die of embarrassment, keep in mind that odds are you’re not going to get off that easily. But there is some comfort in the knowledge that virtually everyone who does anything with their dog will wind up in the same boat, and then it will be your turn to laugh.

© Dog News. This article may not be reposted, reprinted, rewritten, excerpted or otherwise duplicated in any medium without the express written permission of the publisher.
Sat, 02/06/2021 - 2:36pm