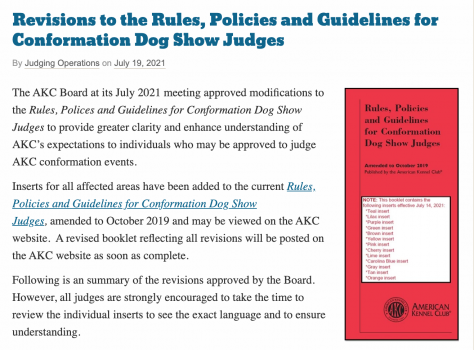 Years ago, the American Kennel Club created a committee to address conflicts of interest. It followed a time when there were some unpleasant allegations of conflicts. It resulted in lifetime suspensions, and some who were interviewed but never charged, and some left the sport. It was a rather dark period in our sport. The American Kennel Club did the best it could do to clean up that time, but some would debate that more could have been done. That committee was headed by David Merriam and included Judi Daniels, Dennis Sprung, Bill Speck, Jim Smith, Helen Lee James, Jim Crowley and Michael Swick. While that committee made recommendations, it basically said that there were no conflicts of interest, especially when it came to judges and exhibitors.

Now we come to present day and quite an uproar from the judging community over the latest message from the judges-operations department head, Tim Thomas. The most offensive is the lead sentence: “Inserted language to provide clear direction that judges should not attend private functions with exhibitors who have exhibited or may exhibit to them on the same weekend. circuit or cluster.” Is this the most pressing issue facing the judges department, the fear that an exhibitor might chat up a judge at a party that would result in some big upsetting win? And an interesting aside, why is this only directed to conformation judges?

We in the sport of purebred dogs are a family and a community unto ourselves. Over the years, we make many friends and acquaintances, and find that we have more than just our love of dogs in common.  Some remain exhibitors, some remain or become professional handlers, and some judge. We socialize, have meals together, even go on vacations together. This in and of itself doesn’t mean that the next time we are all in the same show ring we win. We all have had conversations with judges who tell their friends if they choose to exhibit under them, they must be prepared to take a loss or win equally. The conflict is with the judge, not the exhibitor. There was a world-famous all-breed judge who wouldn't allow their friends to exhibit under them, but when they exhibited it was OK for them to show under their friends. It made it extremely uncomfortable for that all-breed judge’s friends. Longstanding friends were ruined because of this one-way exhibiting.

There will always be someone who screams conflict, but it behooves us to give the benefit of the doubt to the judge in question. Remember, one day that could be you they are talking about. The American Kennel Club is conflicted at the moment, as there are much more pressing issues than conflicts of interest at social gatherings.

© Dog News. This article may not be reposted, reprinted, rewritten, excerpted or otherwise duplicated in any medium without the express written permission of the publisher.
Thu, 07/29/2021 - 8:28pm