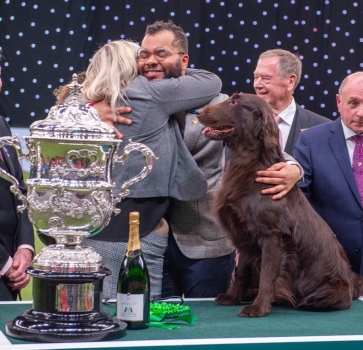 Ukraine, not dogs, was the topic of conversation at this year’s Crufts Dog Show. The fear and doubt and anxiety were palpable. Listening to friends from countries bordering Ukraine, their fears go back to a time that they can’t forget. The 50-some-odd Russian dogs that were entered at Crufts were notified not to attend as the organizers feared for their security as well as other precautions. People were generally sympathetic to the Russian people, but sadly they must pay the price of their country’s leadership. The conversations did switch back to dogs and seeing old and new friends after a long absence. Last year’s Crufts was cancelled due to the Covid-19 pandemic. The 2022 entry was lowered than usual and there were fewer trade stands, as there are still those who are not ready to attend such large-scale events. Virtually no one was wearing masks and it seemed like a very normal dog show pre-pandemic. There was excitement and great enthusiasm from those attending. Thanks to the leadership of the English Kennel Club Chairman Tony Allcock, Show Committee Chairman Tom Mather and long-time Show Manager Vanessa McAlpine, the show ran smoothly and efficiently as it normally does, from the breeds judged Thursday morning to the final judged by Scottish Terrier breeder Stuart Plane, whose selection of the Swedish-bred liver Flat Coated Retriever was met with overwhelming popularity.

When we first attended Crufts in the early ’80s, when it was still held in London, we were taken aback by the difference between the most important show in England and our Westminster Kennel Club, which was smaller in size, but more formal with hushed tones. Crufts was big and loud as it was more than a dog show; it was carnival like, with trade stands that included multiple dog-food companies, vitamins, clothing, cars, vans, camping equipment, and any and all things canine. We came away unsure what we attended. But as the years went on, missing only four events in those years, we realized the importance it held. It was and is a celebration of all dogs, especially purebred dogs, televised all four days and visited by well over 100,000 people. The late Ron Menaker saw that and created the American Kennel Club’s own dog show that has gone through several name changes. We have copied some of the successful English events like Discover Dogs (Meet the Breeds) and Friends for Life (Ace Awards) so the American Kennel Club should look long and hard and think of taking the lead in presenting a stand-alone event in a city like New York that would attract  large crowds of dog owners and lovers and promote our less-than-favorable image to the public.

If you have never attended Crufts, we would strongly suggest you add it to your dog-show calendar. Next time, hopefully the title of this editorial will just be Crufts minus Ukraine and Covid-19.

© Dog News. This article may not be reposted, reprinted, rewritten, excerpted or otherwise duplicated in any medium without the express written permission of the publisher.
Tue, 03/15/2022 - 1:05pm