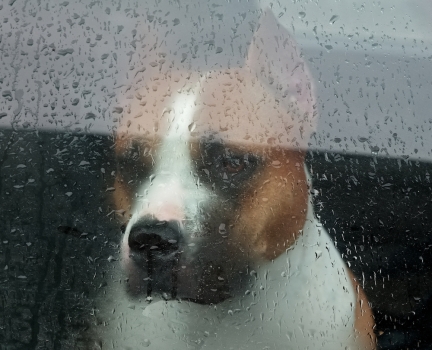 This past weekend, the Bucks County Kennel Club cancelled their yearly show (a one-day event only, a rare occurrence in this day and age of back-to-back shows). The whipping wind and rain – a reported two-plus inches – fell in the area. Cancelling is never an easy decision, as so many factors come into play. But first and foremost is concern for the well-being and safety of all involved. No show-giving club wants to cancel an event, especially after the last two years of mass cancellations and date changes. The club announced the cancellation early enough that exhibitors didn't travel to the Bucks site and were able to make alternate plans for themselves. Whether you choose to believe in climate change or not, one thing is certain: The weather has become more erratic, and the storms longer and stronger, than ever before. Many of us have been to events where sudden storms approached, causing major damage. Where cars, trucks and motorhomes had to be towed free of the sinking mud. Show tents and individuals’ pop-up tents went flying with careless abandon. The following two days after the Bucks County show, the Trenton Kennel Club decided to proceed with their back-to-back events. Their grounds were not spared, as mud and strong winds toppled their show tenting. The show proceeded without any tenting, and the exhibitors were told to provide their own cover. Maybe there need to be hard-and-fast rules for cancelling events, especially outdoors, for things like heat, cold, rain and storms. It takes the decision out of the hands of the show-giving club, and one doesn't have to be at the mercy of club officials.

In a related event this past weekend, the oldest continuing sporting event in the United States, the Kentucky Derby, had its 148th running. The long-shot winner, paying odds of 80 to 1, shocked the fancily dressed crowd as well as those watching on television. Following an amazing run, the winning horse was greeted by the outrider, the person who holds the reins and leads the horse off the track. The horse is a stallion, and started biting the outrider’s horse and then the outrider himself. Damning the optics of what the inexperienced viewers were watching, the outrider had to seize the moment and use force that some found inexcusable. Anyone who has been around horses can appreciate his reaction in defusing a situation that could have been even more damaging to all involved, not to mention the other horses and people still on the track. Whether he should have or shouldn’t have is not the question. He did what the situation called for in that moment. In our dog world, when a dog misbehaves badly in the ring, there is little we can do except for verbal reprimands. So, whether it's the weather or an excited stallion running the race of his life or a misbehaving dog, you do what needs to be done.

© Dog News. This article may not be reposted, reprinted, rewritten, excerpted or otherwise duplicated in any medium without the express written permission of the publisher.
Fri, 05/13/2022 - 9:57am