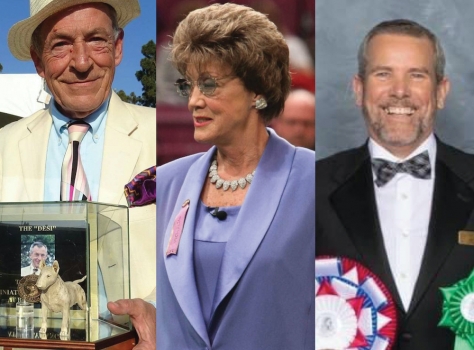 What do Patricia Trotter, Desmond Murphy and Dana Cline, three well-known people in our sport, have in common? Each one has been invited to judge Best in Show at the three most important dog shows of 2021. How we are looking forward to coming together for these three upcoming events, which we have always taken for granted would be held at the times and places to which we we’ve become accustomed. Following a long year-plus of cancelations and postponements, things are slowly getting back to normal. We will once again see friends we haven't seen in more than a year.

Pat will start with her Best in Show assignment at the delayed and relocated Westminster Kennel Club show on the Sunday evening of June 13. This will be her 12th entrance into the Best in Show ring, having won 11 Hound Groups in the past with her Norwegian Elkhounds. Eleven tries for that elusive Best in Show ribbon. It has been suggested in jest that when she finally puts her hands on that Best in Show ribbon she should just start running and keep on running.

Desmond Murphy is up next, when he gets to select the Best in Show winner of the delayed-by-one-whole-year Morris & Essex Kennel Club dog show, which is held every five years (except in this case, six). What can be said of Desi that hasn’t already been said a thousand times? Born into a world-famous dog family, Desi still managed to make a name for himself with his success with Chow Chows and now as a multiple group judge in demand here and abroad. His knowledge of dogs is second to none, and he is indeed a walking encyclopedia of our sport.

Dana Cline gets to close out 2021 by stepping into the Best in Show ring at the AKC National Championship Dog Show Presented by Royal Canin on the evening of Sunday, December 19, in Orlando. Belying his youthful appearance, Dana got his first Great Dane in the 1960s as gift from his parents. He enjoyed great success with his original breed and has gone on to breed Tibetan Mastiffs and Italian Greyhounds, spanning the spectrum of purebred dogs. Dana has become a popular and sought-after judge, approved to judge all breeds. He was voted 2018 Judge of the Year at the Purina Pro Plan Show Dogs of the Year Awards dinner partnered with Dog News.

These three talented individuals came into the sport from three different avenues and have all achieved great success. They are worthy of these Best in Show assignments, and we at Dog News congratulate them. We look forward to being present to watch Pat, Desi and Dana command their respective rings, and wish them all the best.

© Dog News. This article may not be reposted, reprinted, rewritten, excerpted or otherwise duplicated in any medium without the express written permission of the publisher.
Tue, 05/11/2021 - 12:47pm