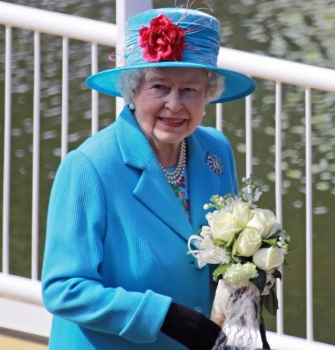 Keep Calm and Carry On
By
Eugene Z. Zaphiris

As one of a handful of Americans who are members of the English Kennel Club, I feel it my sad obligation to address the passing of the Kennel Club Patron Her Majesty Queen Elizabeth II on September 8. I was in England this past week and the sadness the gripped that nation was palpable. (I’ll return again next week, the day after the funeral, to judge the Skye Terrier Club Show on the Isle of Skye. One of only three Americans ever so honored, I follow in the formidable footsteps of Walter Goodman and Ken McDermott.) As Queen of the United Kingdom, for more than 70 years she brought stability to an ever-changing and sometimes menacing world. But her influence was worldwide, and she was met with such affection that there will never be a public figure held in that regard again. In my lifetime, she was mentioned in my parents’ home with reverence – understandably, because my father was a British subject and my parents Greek, so the pairing of Queen Elizabeth and Prince Philip (who was born in Greece) was a natural.

Her love of dogs and horses is well documented. Whether exhibiting or shooting over her two favorite breeds, Pembroke Welsh Corgis and Labrador Retrievers, she never had them far from her side. The dogs traveled with her from castle to palace. An avid horsewoman, she rode daily with her trusted horseman Terry Pentry by her side, an activity that she enjoyed until recently when ill health brought that to an end. She was so attached to her first Corgi, Susan, that she had her hidden under a rug in the royal carriage at her wedding to Prince Philip. Though Susan didn’t show her affectionate side to the staff as she did to the Queen, she nonetheless is buried in the pet cemetery at Sandringham that was created by Queen Victoria. Her headstone reads: “Susan Born February 20, 1944 Died January 26, 1959 For Almost 15 Years The Faithful Companion OF THE QUEEN.” Then over six decades the Queen would own more than 30 of Susan’s descendants. Needless to say, her interest in the breed saw it grow in popularity. Author Penny Junor wrote in her book “All The Queen’s Corgis”: “Dogs and horses are her passion and it is with them, and the people who share that passion, that she truly relaxes. Horses are a rich man’s game but dogs are not. They are a great leveler, they attract people from all walks of life and, over the years, the Queen has had strong and genuine friendships with many of her fellow dog enthusiasts.” These are not idle or invented words; I had the honor and privilege to meet the Queen on several occasion and she was always warm, friendly and eager to talk about dogs. One would only hope that her son, King Charles III, will become the Patron of the Kennel Club. The Queen’s beloved dogs that she leaves behind have now been entrusted to her son Prince Andrew and his ex-wife the Duchess of York, who live on the grounds of Windsor Castle.

© Dog News. This article may not be reposted, reprinted, rewritten, excerpted or otherwise duplicated in any medium without the express written permission of the publisher.
Fri, 09/16/2022 - 11:41pm