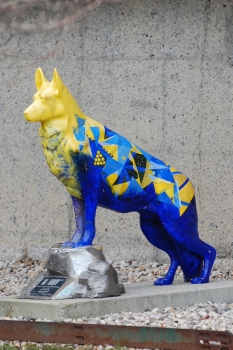 DOGNY statue at Pace University near the Ground Zero site.

Can it be that it was 20 years ago? That bright, sunny September morning, when we were recuperating from several days at multiple tennis matches at the US Open and the Westchester weekend of dog shows? We were saying goodbye to Scott Sommer and Nat and Gloria Reese, who were leaving to attend the delegates’ meeting in New Jersey.

During breakfast on that fateful day, our world changed in minutes, and forevermore. Nineteen al-Qaeda terrorists hijacked four planes: Two crashed into the twin World Trade towers, killing 2,763 people, including 343 firefighters, 23 New York City policemen and 37 Port Authority policemen. A third crashed into the Pentagon, killing 189 people, including the 64 passengers. Finally, there was the plane that crashed in rural Pennsylvania, killing the 44 on board as the passengers tried to overtake the terrorists.

Following that fatal attack, more than 10,000 rescue workers from around the country rallied in Manhattan to look for survivors and then to help clear the 14-acre site of debris. Among those looking for survivors were more than 300 search-and-rescue dog teams. The first team on site was the New York Police Department K-9 Search and Rescuers with their German Shepherd Dog Apollo. Apollo and the dog team worked for 18 hours a day for weeks searching for survivors – just one example of how these dogs persevered in the most difficult conditions, resulting in burned feet and body parts, respiratory illness and other health-related issues. Not very much known to the public at the time, but to a few of us, Poodle fanciers Toni and Martin Sosnoff paid all the medical bills for the search-and-rescue dogs that were brought to the Animal Medical Center for treatment. As animal lovers and New Yorkers, they wanted to help in any way they could, and so covered the staggering costs.

We watched smoke and smelled foul air for what was a very long time from our former Dog News offices near the site. When the American Kennel Club created the DOGNY project to help raise money, Dog News was honored to purchase one of these dogs, which were life-sized German Shepherd Dogs painted by various artists and then exhibited all around Manhattan. Dog News’ German Shepherd Dog was placed across the street from our New York offices in Madison Square Park until it was moved to our current offices, where it proudly greets visitors at our office door. On this 20-year anniversary, two 9/11 canine exhibits are being held to honor our four-legged friends: The AKC Museum of the Dog has a special exhibit titled “9/11 Remembered: Search and Rescue Dogs,” and the 9/11 Memorial and Museum at the World Trade Center site has an exhibit titled “K-9 Courage.” This week we ended the longest war in United States history. This war was a direct result of those attack 20 years ago on September 11, 2001. Take a moment to stop, reflect and mourn those here and overseas who lost their lives and helped us keep our freedom.

© Dog News. This article may not be reposted, reprinted, rewritten, excerpted or otherwise duplicated in any medium without the express written permission of the publisher.
Mon, 09/06/2021 - 9:19pm