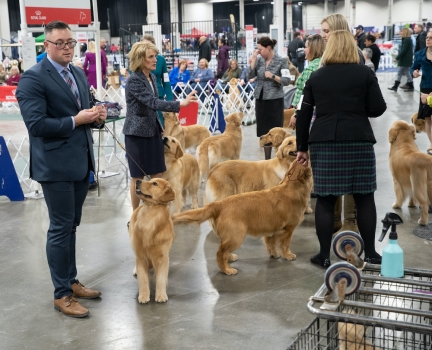 There are always questions that make you instantly wish for a chance to do your response over – maybe even change it.

Over the past couple of months, I have had the very pleasant experience of being the victim of two live interviews. No questions revealed in advance, and naturally there are things I would change – or names I would add, as I simply could not come up with them immediately!

Followed by a couple of sleepless nights going over and changing many answers plus adding names of influential people who actually in my opinion should have come up spontaneously.

But those days are gone …

One question I was asked during both interviews – first by Will Alexander and then Linda Pitts – was: What advice would you give to a young person who wanted to choose professional handler as his or her future employment?

Sadly, even the second time this came up I still had no answer, and still struggle with it.

My immediate response was the same both times: Go back to school first and get a proper education so you have something to fall back on if you at any time change your mind or lose your incentive and enthusiasm.

The general public seems to have a rather romantic idea about what working with animals is all about. In my previous life we were surrounded by a fairly large number of dogs, an even larger number of cattle plus at times a dozen or so horses.

The local schools as well as social services frequently contacted us when they had a young, often problematic student whose dream was to work with dogs and horses. And the case workers or therapists all seemed to think this would be the ideal way forward. So we gave it a shot a few times before realizing that these kids had no idea what working with animals was all about. Nor did the case workers or therapists who when the plan did not seem to work finally entered the scene and were shocked by the discipline and hard work required by their proteges.

So those dreams were short lived.

Although we had some fabulous people working for us, there were also a number of candidates from “within the sport.” Mainly growing up in the city or suburbia, they returned home to their mothers, tails between their legs, as they had had a tough and terrible few days or – at best – weeks with us.

OK, we had extremely strict rules and a tough scheme we all had to follow, but if you have some 40 dogs, 124 heads of cattle plus of course the horses, there were hardly ever enough hours in the day to go to bed having that feeling of “real job satisfaction.” There was always more to be done. And it wasn’t all about playing with the puppies in the orchard …

But how do you prepare anybody for a job as a professional handler and what advice would be yours?

There are no university courses for this profession, so the only way to go is learning from those who have already proven that they can make a decent living showing dogs.

Then, based on their personal favorite breed or groups of breeds, the ultimate question may be: Do you want to be showing dogs that need an excessive amount of grooming, or is your interest more in other breeds that you at times can pick up ringside and immediately hand back to the owner when the competition is over? A huge difference in commitment and aspiration. The latter group my old friend George Ward referred to as dog jockeys!

I grew up with an exceptional enthusiasm for this sport. I became even more enthusiastic because I lived in an area where there were so few shows locally – maybe four or five annually. So attending any more shows meant an overnight train ride, even at times overnight by boat, or crossing the mountains between Bergen and Oslo driving in convoys headed by a snow plough with six to seven feet of snow – sometimes more. And never a hundred percent sure you would make it back again a few days later, as the roads could simply be closed …

We were a little group of crazy enthusiasts with different breeds who did this year after year, and the interesting fact is that most of those crazy ones are – if still alive – also still involved in this crazy game. But during these trips we learned a lot from each other about all the breeds we were bringing along.

Then some of us who were really nuts did whatever we could to get a summer job with a breeder – regardless of breed – where we could learn more about what this was all about.

Some years ago, I wrote an article about the pedigrees of the handlers in the ring in the U.S.  at that time. And by pedigree I refer to whom they worked for. One thing is for sure: If you were hired by Forsyth, Chashoudian, Green, Ward, Rogers, Young, etc., and even if crying yourself to sleep many a night, totally exhausted, you still avoided getting fired and decided to stay, you were definitely an enthusiast! And maybe not surprisingly, a lot of the most prominent handlers and judges we see in the ring today have their roots tied up with those names.

Having heard story after story from both the task masters themselves as well as their assistants, I am not sure I would have passed the test.

Having the responsibility for dogs owned by clients who have the utmost belief in your talent as a handler as well as the way their dogs are cared for puts an enormous pressure on the handlers themselves, which in turn is reflected in the discipline expected by their assistants.

Times are changing, and I just wonder how many of the judges we see in the ring today have really experienced the life of being a professional handler or – even worse – a long-time assistant?

Five to six days of the week at dog shows where the workday never really ends, although starting extremely early. Then normally a looong drive back home, starting preparations for the following week immediately. And if you have terriers, Poodles and other breeds that need constant attention I don’t think 24 hours in a day are always sufficient.

For some reason I think there are very few candidates among the younger generation today who could or would manage to live up to expectations and the workload involved!

There are of course exceptions to all rules, but it is such an interesting fact that wherever you go these days an actual majority of the professionals you see in the ring are born outside of the United States.

So many brilliant talents from Mexico and South America, even Canada, Australia, Norway, Sweden and England, are leading the way in so many breeds .

Could it be that people coming from other countries have different work ethics and are willing to subject themselves with total commitment to this profession?

I have been pondering this subject for weeks without coming up with any answer.

By the way things work, I think I am right in saying regarding this unique choice of career that the choice is not for you to decide. It is already part of you. The profession chooses you. Not the other way around.

Be grateful to all those immigrants who contribute to make our sport remain at the level it is today. So many artists who I am sure had they chosen other art forms would still do extremely well. And we should be happy they decided to stay in our very special sphere.

But I still haven’t been able to answer my own question. What would your advice be?

© Dog News. This article may not be reposted, reprinted, rewritten, excerpted or otherwise duplicated in any medium without the express written permission of the publisher.
Sun, 06/13/2021 - 9:32pm