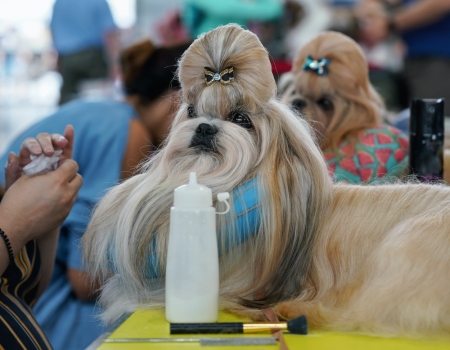 There can be an entirely different dog under all that hair.

What You See Is What You Get?

Of course, you have all heard that expression in the headline a multitude of times.

But is what you see in front of you really telling the truth?

We have the world’s best handlers and groomers in this country, many of whom are able to transform mediocre into something more like sensational. And it doesn’t necessarily involve grooming.

Whenever people talk to me about those more “honest,” if not naked breeds at least with too little coat to hide any sins, I always remember our dear friend June Minns. Probably not a name that means anything for most Americans, but in the U.K. she was known as a very strong character; competitive to a fault, she would do anything to win. Almost. But she had this gift, which she was most likely born with: With a strike of her hands, she could change the outline of any (well, nearly any) dog she handled. Mostly hounds – Borzoi, Greyhounds and Whippets.

The one example I so vividly recall is her showing a brindle Greyhound bitch for a well-known breeder and winning two Challenge Certificates within a short time. Probably not even in June’s hands a “world beater,” but definitely deserving her wins. No complaints from anybody.

Then the bitch went home and returned to compete for her qualifying Certificate handled by her owner. When this overly long, flat-backed thing entered the ring, we simply couldn’t believe our eyes. And of course she was left out. I cannot remember if she was ever shown again, but don’t think she ever got that elusive third Green Card.

Coming home from that show I called June and asked if she was Catholic, as I would campaign for her to be canonized due to her obviously God-given gift! At the same time I warned her that she could be sued by the two judges who awarded the bitch her CCs for a fraudulent performance!

We have all heard complaints about handlers who keep winning all the time, but sadly the skill set includes not just making the dog move round the ring looking its best, but also displaying what can be described as breed-typical temperament and behavior. The number of hours the best handlers spend on perfecting the performance of their top dogs we will never know, but I guarantee you that it doesn’t always come easy to transform something from “great promise” to a “fully fledged star.” And I have seen quite a few examples of just that. Another talent is the gift of “finding” individuals overlooked simply due to lack of grooming, presentation and actual attention!

Some people find in their sleep what cause others sleepless nights … So whatever we choose to believe, we are not all equal regarding our allocated talents.

In my personal opinion, the same applies to both animals and human beings: If you want them to look special, you have to make them feel special! Thus bringing out a potential charisma, which is such an enormous asset to becoming a big winner.

And face facts: Some people are gifted with this talent as part of their DNA and personal assets, while others have to work hard for it – sometimes without really making it!

We also see the same happening to a number of breeders. There are many who don’t seem to make much progress, likely due to a certain amount of kennel blindness. Or simply blindness as another way to express lack of an “eye” or the ability to objectively judge their own dogs – and thus also the ability to improve and move forward. So therefore the reason for their own lack of success is simply all the crooked judges we have in our midst.

Another side of the coin involves the coated breeds – and maybe in particular those that require skillful grooming to make their presence felt.

Coat can hide a multitude of sins. When I first moved to England I remember a lot of the newer and inexperienced judges came up with Shih Tzus, Lhasas and Bearded Collies as their winners in large Any Variety Classes and even Best in Show. I had the privilege of judging a lot of Open shows for a number of years, which gave me the opportunity to put my hands on some of these multiple Best in Open Show winners, only to be very surprised and disappointed. Coat and presentation had certainly “misled” some of these judges, as what they got they had simply been unable to see …

Regarding two of my breeds there are plenty of opportunities to hide faults and make something out of very little! And I have been a victim myself.

My ideal, and the person I tried to copy and emulate at an early stage, was in my opinion England’s most prominent terrier handler in modern times: Ernie Sharpe. From ringside a bitch he was showing caught my eye, and I then – stupidly, without touching her – asked if I could buy her. Her owner said yes, but not until after she had gained her final CC. That came very quickly, so only a few weeks after that show she moved in with us.

Coming directly from a show (where she was shortlisted in the group), she immediately got a bath, and I made the shocking discovery that she was simply a “fake” – a product of extremely skillful grooming! I will not reveal any further details, but we decided to breed a litter from her. The result was acceptable, but not anything near what we considered “our standard,” so the next stop for her was a loving pet home.

A very expensive pet, I daresay, and not found in any of our pedigrees! But a very useful lesson in an area where I thought, based on my own experience in the field of grooming, I knew everything …

I do believe that most judges in the olden days had a practical background in the breeds they were judging. Or even in many cases they had a very close relationship with the leading handlers and had learned from them – maybe more so in the U.K. than anywhere else. But as times have changed, and we all over the world see new judges accelerating through the system with the ambition to judge all breeds in as short time as possible, I worry about the future.

I remember how we with much pride presented our dogs to the best of our ability, and with the highest excitement and expectation looked forward to reading the eventual critique.

Any positive comment, especially regarding coat or presentation, filled us with pride and satisfaction. I still remember Joe Cartledge commenting on my trimming after judging in Sweden: When it comes to presenting a WFT, this young man has no peers!

I was so proud: I think I even believed him until my first visit to Westminster …

I don’t mind the fact that there is much more tolerance when it comes to “helping” the look by a little make-up here and there. (I would never admit to sinning myself …) But when decades of experience make it easy to spot cleverly hidden faults in a dog’s conformation, I have watched from ringside how very important shortcomings have been missed by “short coated” judges.

There should be much more focus and attention given to teaching and then testing new judges on coated or trimming breeds before they are let loose in the ring.

I have been rude a few times and asked, after observing from the ringside, if the judge knew anything about coats, required length, etc., etc. A few times I have been told they were very close and learned so much from a variety of well-known handlers many years ago. All long gone, so impossible to verify.

Well, in my campaign to save breeds from being destroyed by incompetent judging I think there should be a separate “coat test” before entering the ring to judge them. And actually be able to find cleverly “cover ups.” You have to be cruel to be kind – so relevant in our sport to promote progress.

There is always a risk that Incompetence is allowed to create Fashion – and we have already seen that happen in some breeds.

© Dog News. This article may not be reposted, reprinted, rewritten, excerpted or otherwise duplicated in any medium without the express written permission of the publisher.
Thu, 08/26/2021 - 10:19am