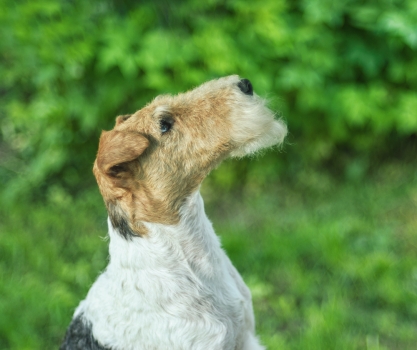 When the going gets rough, think "wire."

I judged in the Chicago area a few years ago, and to make early flights in the morning most judges stayed at the airport.

I happened to be the first in the bar for the agreed-upon pre-dinner cocktail, and struck up a conversation with the only other person there, MR. X. I remember the conversation vividly, as when this guy heard I was Norwegian he took for granted that I was a huge curling enthusiast – the only subject in our brief conversation.

A couple of my fellow judges turned up, and the conversation of course changed to our favorite subject …

One of them was so full of praise of one dog, which he kept referring to as “the lovely bitch,” that Mr. X turned around, saying: “I didn’t intend to listen in, but isn’t that clearly a contradiction in terms?” He sounded rather offended, so we had to explain that we were talking about a Poodle, not a person!

And that’s just one of many expressions we use on a regular basis that might have a very different reaction from “outsiders.” For example, using the expression “having an eye” for type or construction sometimes elicits the response: “The poor guy – was he one-eyed?”

But for those “insiders,” there is a long list of breed-specific words and expressions that, if used incorrectly by a judge, will immediately convince the breed specialists and enthusiasts that you know nothing about their beloved breed …

Personally, I can remember one “outsider” judging Wire Fox Terriers who in her critique described a dog’s “lovely square head,” and a Sighthound person turned terrier judge making the comment to one of the exhibitors after judging Scottish Terriers that some of the breeders had docked their tails too short!

Some time ago I had a person approach me, clipboard in hand, saying: “I just heard you’re an expert in rough-coated Fox Terriers. Any chance you could spend some time with me ringside during breed judging?” To quote my reply would be rather inappropriate, but if you claim to be interested in a breed whose coat texture is even included in the breed name, what would be the expected response?

Just as bad: During a Wire Fox Terrier breed seminar, the presenter was asked: “How often do you clip the body coat?”

Sadly, more and more frequently there are candidates moving forward without any real substance and knowledge behind them! Even more disconcerting: It’s a global phenomenon!

What I find interesting is the variety in terminology from group to group, and of course it is taken for granted that we all can differentiate. Nobody’s perfect, and I have sinned a few times myself. If you’re pretending to know things you don’t, at least try to do it with confidence …

If you keep referring to “Wires,” among terrier people it is immediately known that you mean Fox Terriers. If you’re in Dachshunds or German Pointers, you know the answer.

If you’re using the word “rough,” you could be referring to a number of breeds, but that word means something very different if used by a Collie person as opposed to a PBGV person. However, a Rough Coated Fox Terrier hopefully can never be found.

When “smooth” is part of the coat description, a Collie is not supposed to be smooth-haired like a Dachshund. But referring to a Short Haired Dachshund or Collie can be just as bad for your reputation as being overheard mentioning Smooth Haired German Pointers.

And of course, an equally major sin is to call a blue belton English Setter blue roan … even if the color at times can be very similar to what you find on an English Cocker.

There are many cases where it can be a problem differentiating between fawn and red in breeds where one of the alternatives is considered a negative … So knowing the difference can be important in order to establish yourself as a seriously interested candidate – or even judge.

Some years ago, I read a critique about a breed-winning Lakeland in Europe that included: “Lovely colors, dark mahogany and jet black”! Mahogany and dark tan are listed in the UK standard as highly undesirable, and were probably included due to the frequent introduction of Welsh Terriers in the breed!

A lot of breeds have during their existence needed help from other breeds. In many ways that has made it necessary to include “restrictions” in certain areas to make sure that only the desired features stolen from other breeds were preserved for future generations.

Movement in different breeds will forever be a subject of discussion!

Many years ago, a well-known all-rounder judged Best in Show at a Scandinavian show, and returned to the judges’ table commenting that the Bobtail completely “outmoved” the Reserve, which was a German Shepherd Dog. That immediately drew this reaction from a very famous and more experienced all-rounder: “That is never to be accepted or appreciated!”

Moving freely and with drive is something very different if you’re talking about a Wire Fox Terrier compared to an English Cocker. So not only do we need to know what these words really mean, but also know what it means in relation to a specific breed.

In a world where fewer and fewer breeds (outside the UK) can afford to hire specialists on a regular basis, we already observe that there is a clear tendency to appreciate a more generic pattern of movement for most breeds. The sad fact, in my opinion, is that when these standards were written it was taken for granted that they would mainly be read by people who already basically knew the breeds and what purpose they were created for and thus a more detailed explanation was not considered necessary …

For those of us who came with “baggage” like UK and FCI standards, it can at times be a problem to adjust to the changes many breed standards have undergone since the breeds were introduced to this country and accepted by the AKC. And I suppose I am not the only one who has experienced that the same words have been interpreted and “translated” into something very different from what was intended by “the originators”!

It’s always difficult as an “intruder” to impress established breeders with decades of experience, but being able to effortlessly use breed-specific terminology whenever challenged might help a little!

© Dog News. This article may not be reposted, reprinted, rewritten, excerpted or otherwise duplicated in any medium without the express written permission of the publisher.
Fri, 09/17/2021 - 1:35am