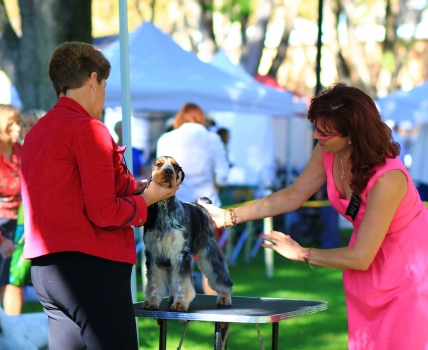 in so many breeds with varieties of colors or markings, there will always be questions about judges' preferences, real or imagined
By
Geir Flyckt-Pedersen

Many moons ago I was judging at a major European show when, after finishing my own stint, I turned around to watch Scottish Terriers in the next ring.

The winner was a very typical wheaten-colored dog, so I asked the judge why his decision seemed so easy? Then came an answer I didn’t really like: “Probably the best wheaten-colored Scottie I’ve ever seen!” And for that reason only, he put that dog over at least five blacks or brindles who were far superior in every way?

I suppose in so many breeds that come in varieties of colors or markings, there will always be questions about the ability of judges to “see through” unfavorable markings, or even that some of us have absolute preferences when it comes to colors in different breeds.

In one of my own breeds, Wire Fox Terriers, I seem to be infamous for not “liking” gingers! Which is nothing but BS!

Hopefully most of you know what ginger in this breed means: simply red and white with no black, which for many years seemed to be a rarity!

The interesting fact is that there were a number of breeders who desperately tried to produce this color, which they did, but at the expense of other and more important breed features. And we had a couple of breeders who for years brought one ginger after another into the ring whose only memorable feature was their color. Otherwise, definitely substandard.

Trying to find out where, why and when this color appeared, it was very obvious that many gingers, as well as the even more seldom-seen black-headed dogs, came from establishments with no “controlled” breeding where quality was not in their vocabulary! When I started up there were still a lot of “leftovers” from the time when WFTs headed the popularity lists and the breed was part of every family with any kind of self-respect – with all the negative side effects that excessive popularity could possibly bring along.

Fortunately, things have changed. We still have some breeders who absolutely love the gingers (including one of my mentors, Grethe Bergendahl), but fortunately most of them don’t seem to sacrifice quality for color. And we have, maybe mainly in the U.S. and Italy, seen some wonderful representatives of the breed in this color.

The breed’s gene pool has become so “limited” that it is virtually impossible to make any combination with no common denominator, even if you have to go way back in the pedigree. I just wonder if that is the reason we see more – and, from those we see in the ring, better – gingers than ever?

I have not, for decades, seen a black-headed WFT, which I take as a sign of progress. In my other original breed, Cocker Spaniels (English, if you insist!), there has always been a separation by color – solid or particolor – and even in the U.K. there were breed clubs representing the different colors, which came as a surprise to me. But with a closer look, it made sense, as the solids and partis, although the same breed, had differences in both looks and issues. A very interesting fact was that so many of the breeders considered white, black and tan acceptable colors. But blue roan and tan was by many considered not suitable for the show ring and sold as pets. Orange or lemon roan or in combination with pure white was considered a feminine color, and males of this color were rarely retained.

Still rather a mystery to me, but also an indication that in those years with large kennels the breeders were spoilt for choices and had options we never could “afford” today!

For many years I had the pleasure of owning both particolors and solids. Just to learn that not only were their exteriors different (in some cases enhanced by color more than construction?), but the colors also at times included issues very different from each other. Which is one of the reasons I was, and still am, dead set against mixing of colors, as I actually close up witnessed dogs from some combinations ending up with ALL problems, from hips to eyes, kidneys, liver, mismarks and actually also temperament.

I think for some reason reds were blamed for aggressiveness and bad temperament, which we never experienced, so probably another side effect of massive popularity and uncontrolled breeding driven by greed only! There is clearly a difference in temperament based on color, but I have personally never experienced anything nasty from any of them.

I think the challenge of breeding dogs of both varieties matching the standard is something breeders have successfully aimed at for decades. Without mixing the ingredients they have done a great job! And I could also add a long list of breeders within each group who although based on similar lines successfully created dogs that were easily recognizable as “their type”…

I spent a lot of time with British Cocker breeders, which gave me a lot of information about a variety of issues that I will never share with anybody (because it is impossible to verify and maybe not always true), but when being told by the breeder of one of the breed’s most influential brood bitches that she had her hip sockets removed prior to having her last litter … I could list a series of serious conversations regarding both “groups,” which together created my “separation” view. Some accusations were probably caused by envy, but those words have certainly been etched in my head ever since. True or false?

(Yes, I am fully aware of the fact that there are dogs of the “wrong colors” way back in many pedigrees, but it normally took generations to hopefully keep the positives of this move and get rid of the negatives and bring the desired features into the ring!)

Bear in mind that in the U.K. as well as under FCI rules although there is the opportunity to exhibit in color-restricted classes, when it comes to Challenge Certificates (points in the US), as well as Best of Breed, etc., they all compete against each other.

And when breeders describe their particolor with a hallelujah – as they have a “solid” outline – I still think many of the old partis would look very much like solids helped by a little spray paint!

The color question is something that I have wondered about for years – and I was reminded of some issues when reading Sid Marx’s views regarding Grand Champion points (nothing to do with colors).

Maybe the rules have changed, but during my time showing under FCI rules there were color CACIBs in a number of breeds. I think in Great Danes there were at least three CACIBs for each sex, fawn or brindle, black or blue, and harlequin.

The main winners were regularly fawn or brindle, but there were numbers of rather unattractive International Champions of the other colors with no national title.

Then I think it was the same for Poodles: white, black, brown, silver, white and apricot could all be awarded a CACIB each, which meant that the same phenomenon appeared here. Took a long time before apricot as a color won FCI approval. Of course there were some decent International Champions of all colors, but there were also numbers with that title that would never achieve a national title in any country.

There are still so many mysteries that are specifically American – for instance, I cannot understand why and how somebody came up with the idea of having two littermates compete in different varieties, each with their own points toward the title, simply as they had different color.

I think that one breed should be one breed, regardless of color, and judged by the same requirement for type and quality!

I have had the response from people commenting that “A good horse is never a bad color,” which I personally don’t think is relevant, as surely this was a comment made relating to an animal’s racing, jumping and general working ability.

Could I be wrong?

But shouldn’t color blindness be a standard requirement for any judge who is licensed to judge breeds where markings and colors may cause even optical illusions and seriously affect the overall picture of an exhibit?

© Dog News. This article may not be reposted, reprinted, rewritten, excerpted or otherwise duplicated in any medium without the express written permission of the publisher.
Fri, 08/06/2021 - 6:37pm