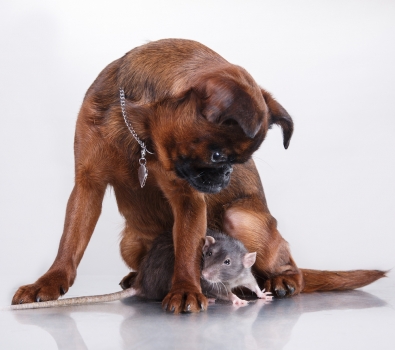 What diseases can my dog catch from bats?

Rabies is the main concern with regard to diseases bats can transmit to dogs. It is important to note that although bats constitute one of the biggest reservoirs of rabies in the United States, less than one percent of all bats in the country carry the disease. While rabies is a potentially fatal disease to dogs and people, the incidence of contact with bats is rare.

There are several ways bats can transmit diseases, but the most common is through a bite. This is how rabies is transmitted. Rabies is a viral infection that causes sudden inflammation of the brain. It is almost always fatal.

The first signs of rabies may be vague and include lethargy, fever, vomiting and loss of appetite. The symptoms progress within days to paralysis, seizures, difficulty breathing and swallowing, excessive salivation, abnormal behavior and aggression. It is necessary for both health and legal reasons to keep your dog up to date on his or her rabies vaccination.

Along with rabies, histoplasmosis is an important disease to be aware of when dealing with bats. Histoplasmosis is a fungal infection that is usually contracted after the dog inhales or eats the spores present in bat feces (guano).

Dogs develop the symptoms of histoplasmosis about two to three weeks after infection and can vary depending on which organs the fungus infects. Because the infection spreads to the gastrointestinal tract, the most common symptoms are bloody diarrhea and straining to defecate. Vomiting, weight loss and fever may follow.

As the disease progresses, other body parts may be affected. Dogs with a heavy fungal burden in their lungs have a cough, rapid breathing, nasal discharge and swollen lymph nodes. If the infection spreads to the liver, jaundice, or yellowing of the skin, will occur. In rare cases, the infection spreads to the eyes, bones and skin. This results in blindness, lameness, swollen joints and oozing sores.

Histoplasmosis is diagnosed with a blood test. The treatment is long-term antifungal medication to destroy the Histoplasma capsulatum organisms. The goal is to treat until the dog has been symptom free for one month. Many dogs require more than six months of treatment.

What should I do if I encounter a bat?

Bats are an important part of our ecosystem. They play an essential role in insect control, pollinating plants and dispersing seeds. In fact, bats are the sole pollinator for the agave plant, which is a key ingredient in tequila. In most cases, the best way to deal with bats is to leave them alone.

International Bat Week is held each year to raise awareness about the crucial role of bats in our environment. This year Bat Week runs from October 24 to 31, 2022. Outdoor enthusiasts are encouraged to refrain from visiting caves and mines during the fall and winter months to avoid disturbing hibernating bats.

It is best to keep bats outside. Make sure all open doors and windows have screens that will prevent a bat from flying inside your home. If you find a bat inside, immediately close the doors to the room to contain it, if possible. Call your local public health office to get advice on whether the bat needs to be safely captured and tested for rabies infection or released outside.

Since bats are nocturnal and only active at night, they do not usually come into contact with people. If you see a bat during the day, and it is acting strangely, such as struggling to fly or lying on the ground, the bat could potentially be infected with rabies. Leave that bat alone.

If you find a dead bat in a public place, you can call your local animal-control office. If you find a dead bat on your property, wear heavy leather work gloves to pick it up or scoop it up with a dust pan or shovel. Put the body in a sealed container or place it in a double, heavy-duty zip-lock bag. Store it in a cooler or refrigerator until you have notified animal control.

Anyone who has had contact with the bat or its saliva could be at risk of getting rabies, which is almost always fatal once symptoms begin. Fortunately, rabies can be prevented if treatment is given before symptoms appear. If you think you, your children or pets have touched or picked up a bat, call your local public health office immediately for advice.

What diseases can my dog catch from rats?

Rats can transmit diseases to dogs. While not all of these diseases are fatal, they do carry serious health risks for you and your dog. It is best to avoid contact between rats and dogs.

Leptospirosis is a potentially deadly and easily transmissible disease caused by bacteria. This organism infects the kidneys. Rats are common carriers of the leptospira bacteria. Infected rats shed the bacteria in their urine. Dogs become infected by drinking contaminated water. Leptospirosis can be transmitted from animals to humans. In the early stages, most infected dogs respond well to treatment with intravenous fluids and antibiotics.

Tularemia is a disease caused by bacteria known as Francisella tularensis. It is also called “rabbit fever” because it affects rabbits and rodents. Tularemia infection can occur in dogs if they kill or eat an infected rabbit or rodent. Dogs can also contract the disease from the bite of an infected blood-sucking tick or flea, as well as by drinking contaminated water.

The symptoms of tularemia are poor appetite, lethargy and fever. As the disease progresses, inflammation of the eyes, oozing sores and enlarged lymph nodes may develop. If your dogs find a dead wild rodent, it is best to prevent them from eating it.

Toxoplasmosis is caused by the parasite Toxoplasma gondii. It is a parasite found in all parts of the world that affects humans and warm-blooded animals, such as rats. Toxoplasmosis is common in cats. The parasite requires cats as a host to complete its lifecycle. This is the parasite that pregnant women are warned about if they handle cat litter or do gardening barehanded where cats are known to roam.

Healthy adult dogs may be infected with toxoplasmosis and show no symptoms. Puppies are more sensitive and can develop a fever, diarrhea, cough, difficulty breathing, jaundice, seizures and even death if the infection is not treated.

Dogs can easily become infected by consuming cysts from cat feces or by eating an infected rodent. Research has shown that rats infected with the toxoplasmosis parasite become less afraid of cats, and even become attracted to the smell of cats. Because the rats lose their natural fear of predators, they are easy prey for dogs.

Rat bite fever (RBF) is a reaction to the bacteria Streptobacillus moniliformis that is transmitted by a rat scratch or bite. Your dog can also get RBF by ingesting anything contaminated by rat feces. The bacteria that causes RBF is a normal part of the bacterial flora in rats’ mouths and noses.

Any animals that come into contact with rats, such as mice, gerbils, hamsters, rabbits, guinea pigs, squirrels, cats or dogs, can become infected and spread the infection to humans and other pets.

Plague is a bacterial disease caused by the parasitic genus Yersinia pestis. There are three forms of plague: bubonic plague, pneumonic plague and septicemic plague. Rats, squirrels and mice are carriers of plague. The disease is transmitted when a rodent either bites or is bitten by a dog. Fleas that feed on infected animals can also spread the disease.

The infection travels quickly to the lymph nodes, which react by rapidly over-producing white blood cells. Dogs infected with plague will experience fever, inflammation and excessive pain due to the swollen lymph nodes. Humans are susceptible to plague as well. Flea and rodent control are necessary to prevent this disease.

Sanitation is the main way to prevent rat infestations. Keeping food and garbage contained will prevent rat access and encourage the rats to go elsewhere. Many people are keeping chickens in their backyards. This has led to a dramatic increase in rats and rat diseases in urban areas.

© Dog News. This article may not be reposted, reprinted, rewritten, excerpted or otherwise duplicated in any medium without the express written permission of the publisher.
Fri, 11/04/2022 - 1:03pm