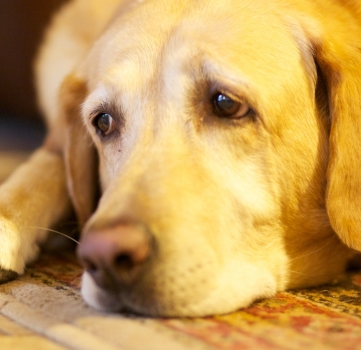 Coping with Anxiety in Dogs

From training to medication, a number of options are available
By
Merry Fitzgerald, DVM

How can I help my dog with his anxiety?

The past year has brought many changes to our lives, as well as the lives of our pets. Dogs thrive on routine, and with the drastic alterations in our normal lives, many dogs are experiencing anxiety. Owners are working from home, so they are there, but not paying attention to the dogs. Weekend outings for training and dog-shows events are sporadic, compared to the regular regimen. Just like humans, dogs experience anxiety.

Dog anxiety can have a number of causes. Some of the most common are fear, separation and age-related anxiety.

Fear-based anxiety can be caused by loud noises, strange people or animals, visual stimuli like hats or umbrellas, new or strange environments, specific situations like the vet’s office or car rides, or surfaces like grass or wood floors. Most dogs only have brief, mild reactions to these kinds of triggers, while anxious dogs have a dramatic, prolonged response.

Separation anxiety is estimated to affect about 14 percent of dogs. Dogs with separation anxiety are uncomfortable when left alone or separated from their family members. This anxiety often results in undesirable behaviors, such as whining, barking, destroying furniture or furnishings, as well as urinating and defecating in the house.

Age-related anxiety affects older dogs. It can be associated with cognitive dysfunction syndrome. Older dogs with this syndrome show a decline in memory, learning, perception and awareness, similar to people in the early stages of Alzheimer’s disease. These deficits lead to confusion and anxiety in older dogs.

What are the symptoms of anxiety in dogs?

You can tell your dog has anxiety when he exhibits certain symptoms. I mentioned barking, destructive behavior and inappropriate urination or defecation. Other symptoms include panting, drooling, restlessness, and repetitive or compulsive behaviors.

Urinating and defecating in the house is a common symptom of separation anxiety. Anxious dogs work themselves up to the point they lose control even if they are housebroken. Dogs suffering with separation anxiety also exhibit destructive behavior. The damage is usually located around entry and exit points, like doorways and windows. Dogs in this heightened state of anxiety are at risk of harming themselves. Attempts to break out of dog crates, windows and doors can result in painful injuries and expensive veterinary treatments.

The most dangerous symptom of dog anxiety is aggression. The aggression can be targeted directly when the dog acts aggressively toward people or other dogs. Indirect aggression occurs when a person comes between the dog and the source of the dog’s aggression, such as another dog or threatening object.

What is the best way to treat anxiety in dogs?

Since excessive anxiety is often caused by a variety of factors, the best approach is to incorporate a combination of training, desensitization techniques and, in some cases, medications. If your dog develops severe anxiety, a trip to the veterinarian for a physical examination and blood work can determine whether a medical condition is the reason for the symptoms.

One training strategy owners can use to treat anxiety is counterconditioning. The purpose of counterconditioning is to change your dog’s response to the stimuli responsible for the anxiety. This is done by replacing the anxious or aggressive behavior with a more desirable behavior, such as sitting or focusing on the owner.

Another training technique is desensitization. The owner slowly introduces the dog to the source of the anxiety in small doses and at a decreased intensity. Repeated exposure and rewarding positive behavior will eventually reduce anxiety. Working with a professional trainer can help you choose the right approach.

Once your veterinarian has given your dog a clean bill of health, medication may be prescribed for dog anxiety as part of the treatment. No matter which medication your veterinarian chooses, you will also need to incorporate the behavior-modification training in order to help your dog work through their anxiety. There are no quick fixes, though. Some dogs can eventually be weaned off anti-anxiety medications, while others require lifelong treatment.

What medications are given to dogs with anxiety?

These are the most commonly prescribed medications used to treat dog anxiety:

Alprazolam (Xanax), diazepam (Valium) and lorazepam (Ativan) are members of the benzodiazepam class of sedatives. They work by depressing activity in certain parts of the central nervous system. Benzodiazepam drugs are typically prescribed as anti-anxiety medications, sedatives, muscle relaxers or suppressors of seizure activity.

Alprazolam (Xanax) may help dogs that become anxious during thunderstorms. Diazepam (Valium) is most effective as an anti-anxiety medication, muscle relaxant, appetite stimulant and seizure-control drug. Lorazepam (Ativan) works best for dogs that are anxious in specific situations, such as car rides or veterinary visits.

These drugs work best when given at the earliest sign that a dog is becoming anxious or before the triggering event, if possible.

Amitriptylline and clomipramine (Clonicalm) are tricyclic antidepressant medications that work by increasing the levels of neurotransmitters serotonin and norepinephrine, which affect mood. Several weeks of use are needed in order for a therapeutic effect to be seen. Up to two months may be needed to determine whether the dog is responding to the medication.

Buspirone is a member of the azaperone class of medications formulated to treat anxiety by activating serotonin receptors within the brain. It is prescribed to help dogs that become anxious when interacting with other dogs. Buspirone requires continued use to be effective, so it is not helpful for dogs that suffer from situational anxieties like thunderstorms.

Dexmedetomidine (Sileo) is an alpha-2 adrenoceptor agonist that works by depressing activity in certain parts of the brain. Sileo has been approved by the FDA to help dogs with noise aversion. The drug works best when given before the triggering noise event, such as fireworks. Sileo is dispensed in a multidose tube and is absorbed when applied to the gums.

Fluoxetine (Reconcile or Prozac), Paroxetine (Paxil) and Sertraline (Zoloft) are in the class of medications called serotonin-reuptake inhibitors (SSRIs). These drugs work by increasing the amount of the neurotransmitter serotonin in the brain.

Fluoxetine (Reconcile or Prozac) is FDA approved for the treatment of separation anxiety in dogs. It can also be prescribed for other types of anxiety and behavior issues, including compulsive chewing, circling, self-mutilation (pulling fur out or licking skin compulsively) and aggression.

Paroxetine (Paxil) works best for the treatment of anxiety-related disorders, such as aggression, fear of noises and self-mutilation. Sertraline (Zoloft) can be given to dogs with separation anxiety, thunderstorm phobia and fear-based aggression.

Your veterinarian can help you choose which medication will best address your dog’s anxiety.

What are some other products that will help ease my dog’s anxiety?

The ThunderShirt is a popular option. It is a garment that is strapped around the dog’s torso, leaving the legs free to move. The shirt uses gentle, constant pressure to calm dogs, similar to swaddling a baby.

Adaptil and other pheromone-based treatments release pheromones that produce calming effects and reduce feelings of stress and fear. A pheromone is a chemical substance that an animal produces that changes the behavior of another animal of the same species. The products can be collars, treats, sprays and diffusers.

A fan, radio or white noise machine may be used to distract your dog from startling noises. Apparently, classical music has the most relaxing effect on dogs with noise sensitivity.

Aromatherapy has been shown to have calming effects. The American Veterinary Medical Association recommends lavender aromatherapy for anxiety and car sickness. Be sure the essential oils you choose are safe for dogs.

Herbal supplements that contain calming ingredients like oats, skullcap and echinacea can be helpful. Valerian is also reported to be effective in treating dog anxiety.

CBD treats and CBD oil are used in cannabis-derived treats for dogs. Many products are on the market. They have a calming effect without the compound THC.

Remember that one of the very best ways to alleviate anxiety in your dog is exercise. Exercise releases the chemical serotonin, which relieves anxiety and boosts mood. In most cases, a tired dog is a happy dog.

© Dog News. This article may not be reposted, reprinted, rewritten, excerpted or otherwise duplicated in any medium without the express written permission of the publisher.
Sat, 02/06/2021 - 10:58am