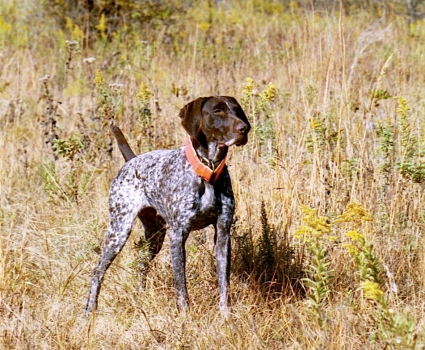 All signs point to the German Shorthaired Pointer
By
M.J. Nelson

Dogs that point game have been around for a long time. They are known to have existed in Europe, for example, as far back as the 13th Century.

Among the most popular of this mixed group of pointing dogs was the Old Spanish Pointer, or Perro de Punta Español, a now extinct breed that is believed to be the ultimate ancestor of almost all pointing breeds. Hunters and breeders in both the British Isles and on the Continent used the Old Spanish Pointer as the foundation for a number of breeds, but where the British and Irish breeders quickly became “purists” in the sense that they wanted their pointing dogs to hunt birds exclusively, the Continental breeders weren’t so fussy. They wanted their hunting dogs to be “generalists,” not “specialists,” willing to hunt both feathers and fur.

This was particularly true of German hunters. They wanted an all-purpose hunting, pointing and retrieving breed. They spent generations crossing various German hounds and tracking breeds with the Old Spanish Pointer, the Hanover Hound and quite likely also the Pointer until finally, sometime in the 1800s, the versatile bird dog that English-speaking countries call the German Shorthaired Pointer emerged.

The GSP has not only been used to successfully hunt game birds, opossum, rabbits, raccoons and even deer, but the breed’s willingness to hunt almost any quarry has also contributed to its success in a wide variety of other non-hunting dog sports.

“German Shorthairs want to please you,” says Carol Chadwick, whose current GSPs are Cole (GCh NMK’s Ain’t Misbehavin’ MH DS), Benny (BISS DC AFC NMK's Molto Bene MH ROMXX HOF) and Brisco (GCh DC NMK's Presumed Innocent SH), and who also owned Brittania (MBIS MBISS DC Can Ch NMK's Brittania V Sibelstein ROMXX HOF.)  “This makes the GSP successful in a huge range of performance events. The breed was tasked with several jobs originally, not only a hunter but also protector and companion. They still make a great family dog and only need to be given plenty of outings to provide adequate exercise and mental stimulus to keep them happy. Having watched GSPs excel in dock diving, flyball, agility and obedience, if you ask them to do something and introduce the concept properly, they willing to try anything. So much of what you’d expose a GSP puppy to winds up being ‘cross training’ for some other performance event.” 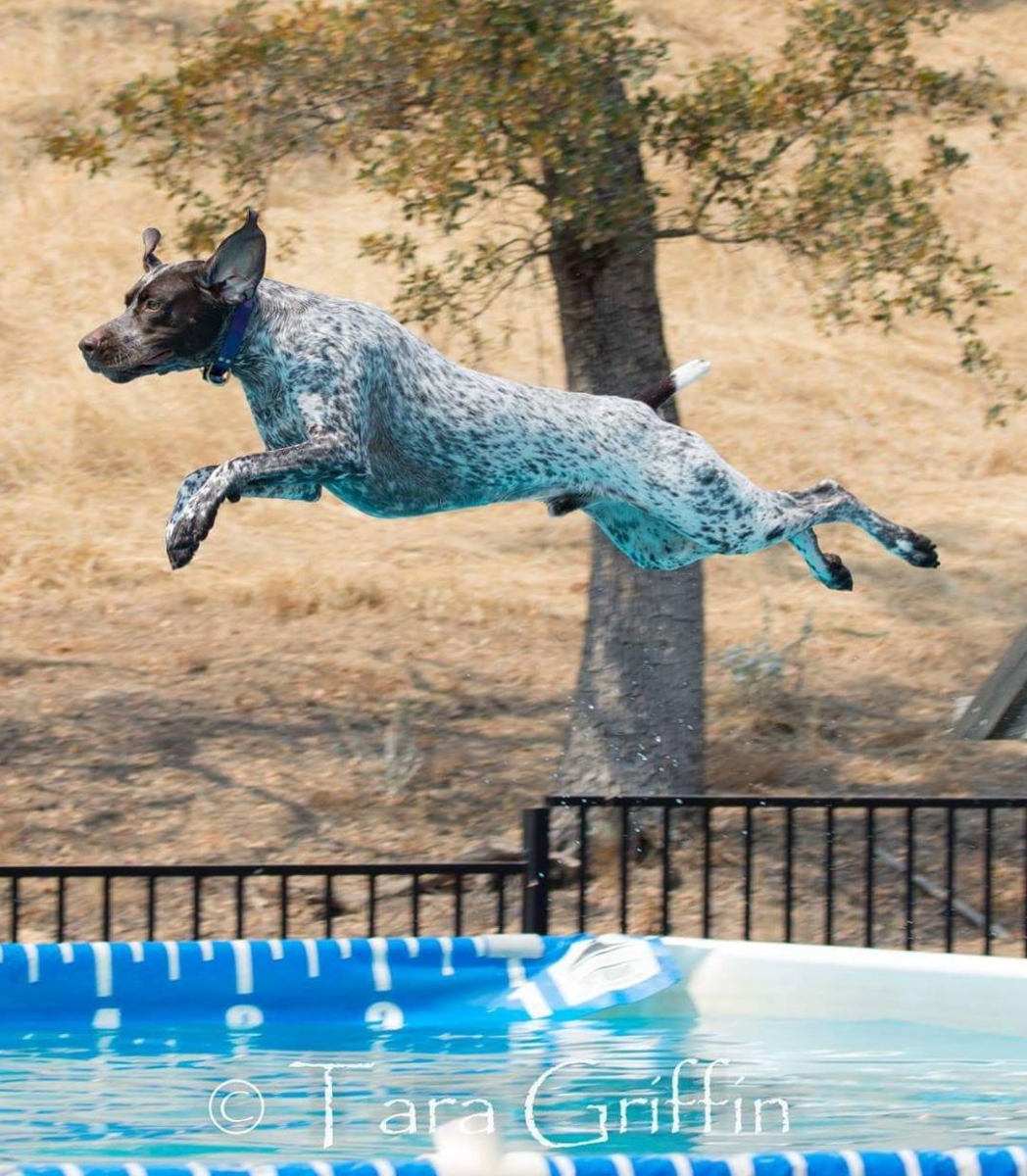 Jean Bernier notes that German Shorthaired Pointers are as athletic as they are intelligent, making them prime candidates for agility, obedience, flyball and dock diving.

“Their keen noses are needed in barn hunt, nosework and the field,” she explains. “The love for water is a necessity for dock diving and retrieving in both North American Versatile Hunting Dog Association and the GSPCA Water Ratings tests. Their short coat is an absolute blessing for a show dog and it also makes them ideal service dogs along with their great noses.  Truly there isn’t a sport, other than herding, where a GSP cannot excel.” 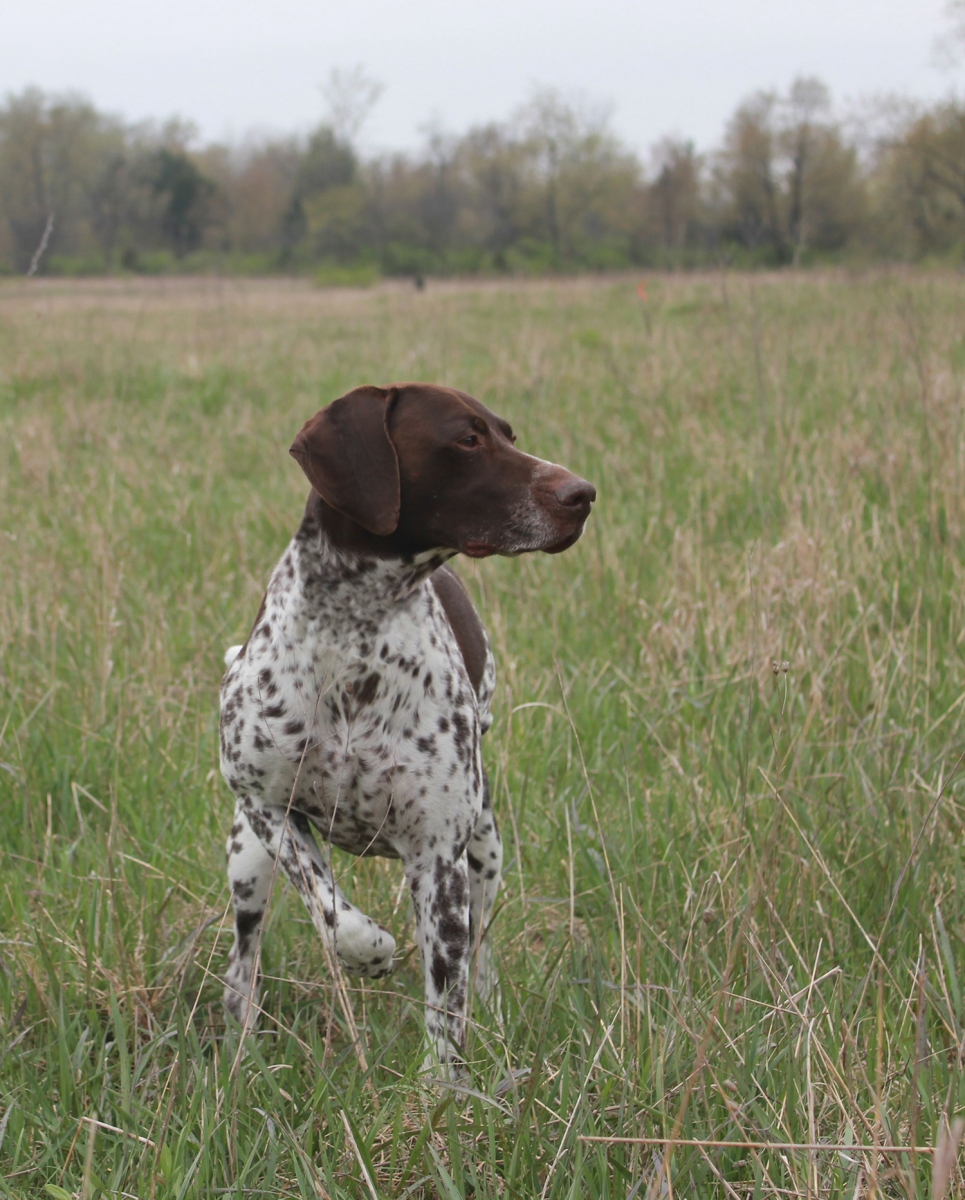 But, Bernier reminds, “you always have to be ready for whatever they throw at you. It’s very helpful to have ‘a lot of tools in your toolbox’ with this breed, as a technique that works with one dog may not work for another.” 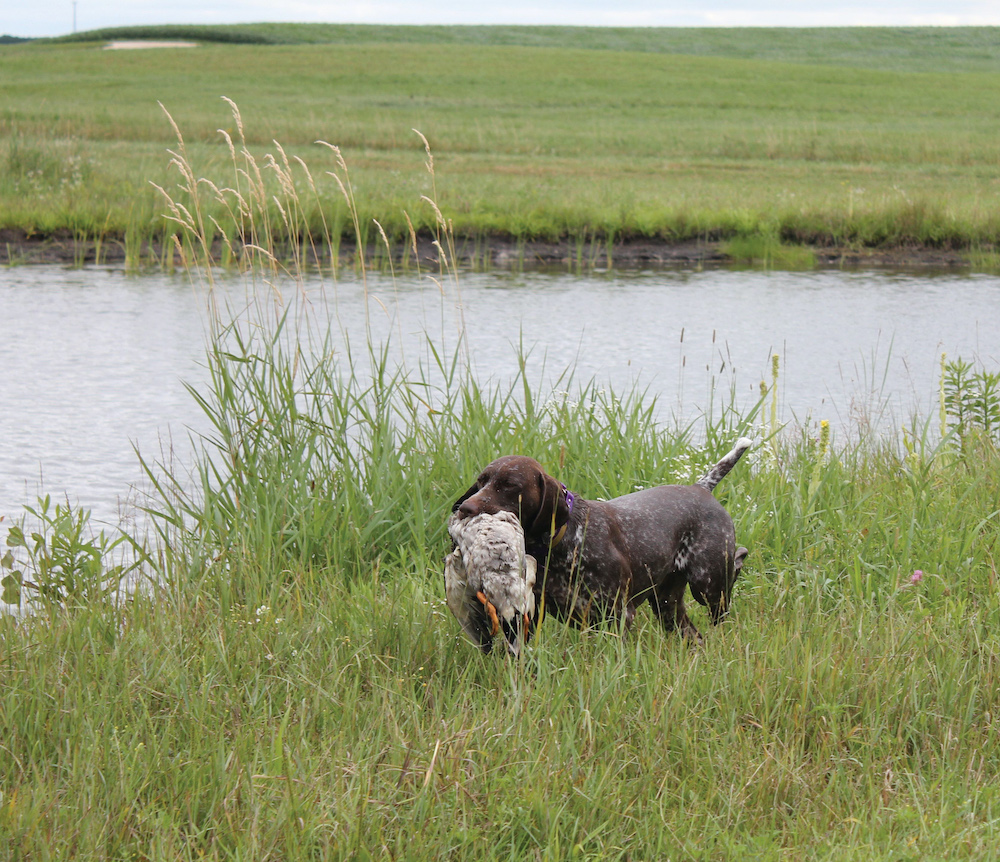 While the breed is successful in many different dog sports that require teamwork, GSPs also retain the kind of independence necessary to be successful in the field.

“My dogs run field trials, and they have to be willing to run to the horizon but still follow commands at great distances. While that almost sounds like a contradiction in terms, it’s not. This is a common situation in herding trials, for example, and those dogs are renowned for their successes in other dog sports,” says Katrin Tazza who owned or owns NGDC DC AFC Up N’Adam’s Super Sioux CDX MH and his daughter, DC AFC Up N'Adam's Silhouette CD MH. “The ability and willingness to work independently doesn’t mean that the dog will be out of control.” 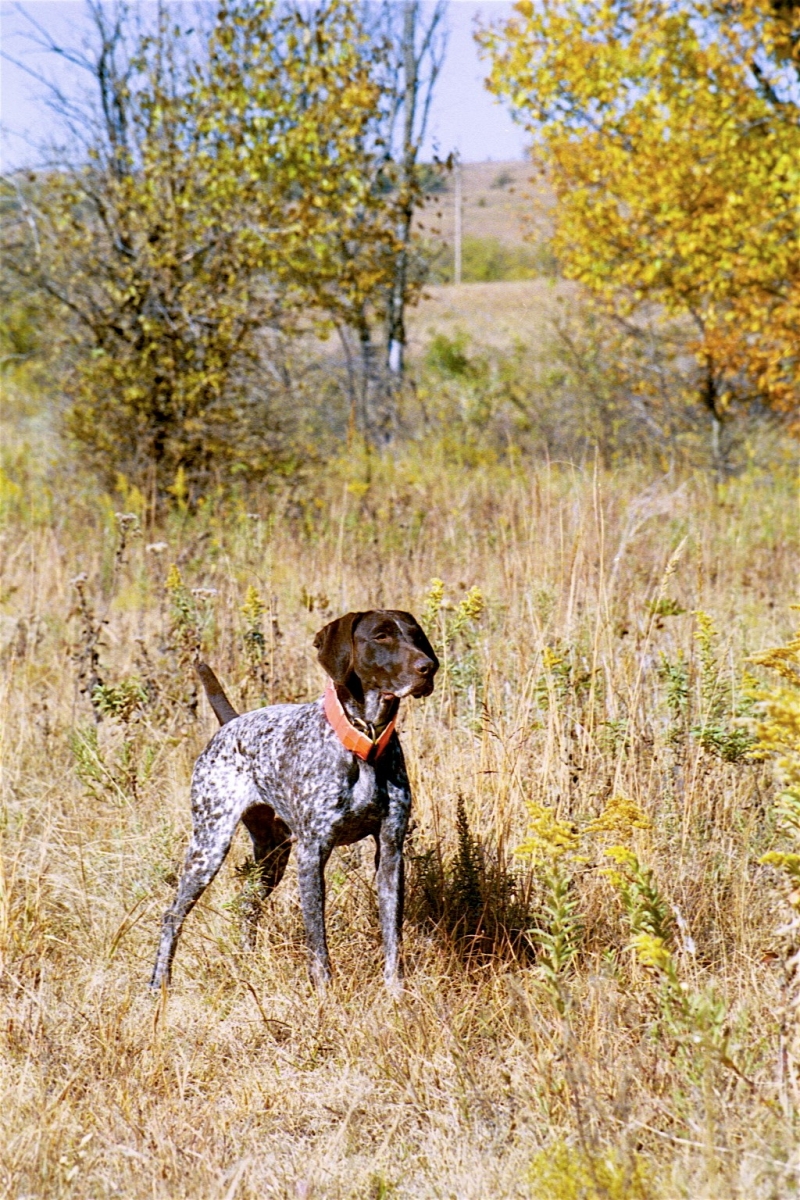 Tazza points out that GSPs have an outstanding sense of smell. “I’ve had dogs begin picking up bird scent as much as a quarter of a mile from where the bird actually is. This is likely the reason the breed excels at nosework and search and rescue,” she says. “One trait that a good field dog needs, aside from an intense desire to find and point birds, is being resilient enough to overcome setbacks in training, able to accept corrections and move on without sulking or shutting down.”

Chadwick does conformation, field work and dock diving with her dogs.  She tries to get a dog’s Junior Hunter title out of the way as quickly as possible to let them run in puppy and derby stakes in field trials as dogs age out of the Junior stakes fairly quickly.

“It takes a lot of patience and time to transition a dog to the fully trained, steady-to-wing-and-shot performance that’s necessary for Senior or Master Hunter tests or gun dog stakes. The time it takes to achieve this level of excellence varies with each dog. Not every GSP is ready to be trained right out of puppy or derby and every dog matures at a different rate,” she says. “I’ve found that going to dog shows or doing something simple like dock diving provides a great break for a dog in training and keeps them from getting sour about training. Even just going to a fun place to run without any birds gives them the mind-clearing to go back to training refreshed. Every dog is different, and it is a smart owner or trainer who realizes that sometimes training is simply a matter of timing.” 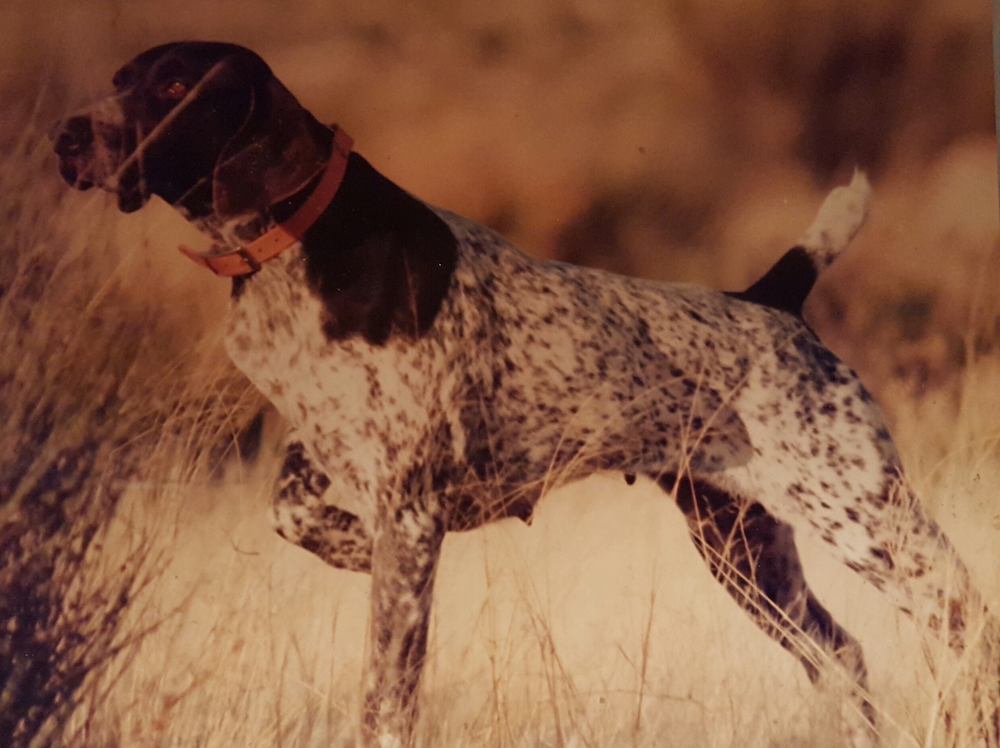 As is the case with many dogs involved in performance activities, GSPs either have or tend to develop a mind of their own. Bernier’s dogs are always breeder and/or owner trained and handled in all their events, which enables her to evaluate their personalities, temperaments and trainability firsthand. This is especially true in a stressful or competitive situation.

“I’ve found, over the years, that once you get one exercise fixed, something else falls apart.  You have to anticipate how a dog is going to react to a certain training exercise and then stay one step ahead of them to correct the unwanted behavior while still keeping the training fun,” she explains. “For example, I’m currently working with Skyler in obedience at the Open level. She has suddenly decided that she doesn’t need to come on the drop on recall, as she is anticipating the ‘drop’ part of the exercise. ‘Why should I bother to come when you’re just going to tell me to go down?’ is obviously how she’s viewing this exercise. So, I need to get it through her head that she doesn’t have the option of not coming.”

Field trials, whether for pointing breeds, retrievers or flushing spaniels, are difficult and demanding. The demands are not just on the dogs, but also on the trainers and handlers.

“Field-trial dogs have to learn quickly, remember what they are taught and be able to repeat it over and over. Most trials for pointing breeds are horseback trials which means you have to be able to ride and mount from the ground,” says Tazza, whose dogs are conditioned about four days a week for 30 to 60 minutes in harness off a four-wheeler moving at a sped of about six to nine miles per hour. “Some people road their dogs off a horse in harness, others have figured out how to do it off a mountain bike.”

As difficult as field trials can be, Tazza reminds that field champions are very important to the breed. “Because unless you select for field ability, in time you may lose it in the breed as we have seen in many breeds in the sporting group. One of the most serious challenges the GSP breed faces are breeders who only breed to win in the show ring without regard to field ability or serious health issues or temperament. A field dog has to have the ability to run in competition with a dog they don’t know and not show aggression.” 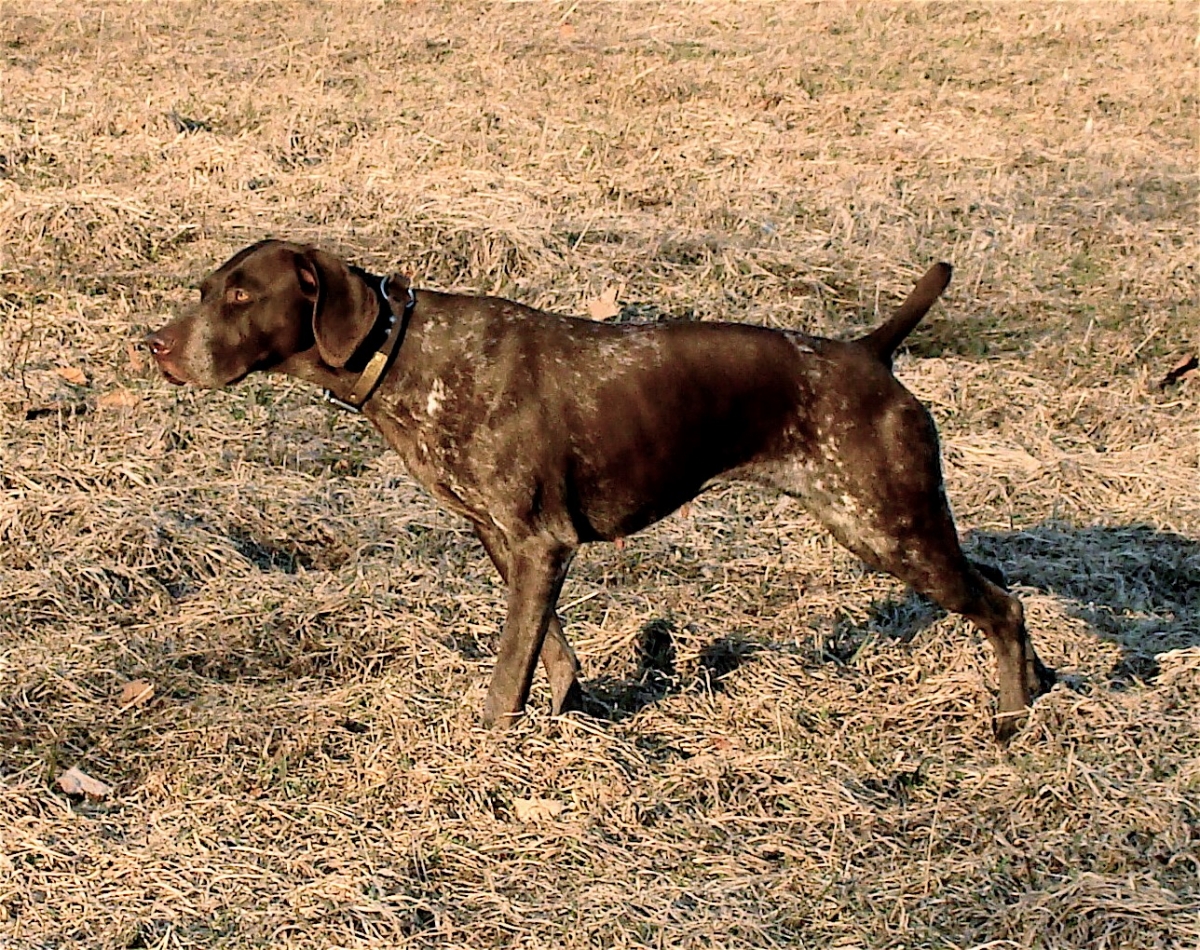 Another issue of major importance to many in the GSP breed is people breeding GSPs to Pointers from field lines, according to Chadwick. This has been an issue in the breed for at least 20 years and quite probably even longer.

“The field people breeding GSPs to Pointers from field lines, cutting the tails and registering them as GSPs, are doing NO FAVORS to our breed,” she says. “The temperaments are not the same, and I have had to rescue a number of these mixed-breed mutts that their owners cannot live with because the dogs have Pointer temperaments, not GSP temperaments.”

Brisco (GCh DC NMK's Presumed Innocent SH), another of Chadwick’s GSPs, finished his conformation championship from the puppy classes and was handled to all his field titles by an amateur.

Size is also an issue. “While field-line Pointers are bigger running and point with 12 o'clock tails, that is NOT what a GSP is suppose to be. Originally, our breed standard called for ‘a medium sized, medium range gun dog,’” says Chadwick, adding that this is one reason why she believes multi-titled GSPs are important for preventing the breed from splitting into field and show types, as has happened with many of the other Sporting breeds. “I’m very proud that every one of my dual champions can pass a breed marker test, not just a DNA screening.”

© Dog News. This article may not be reposted, reprinted, rewritten, excerpted or otherwise duplicated in any medium without the express written permission of the publisher.
Thu, 05/06/2021 - 9:25am