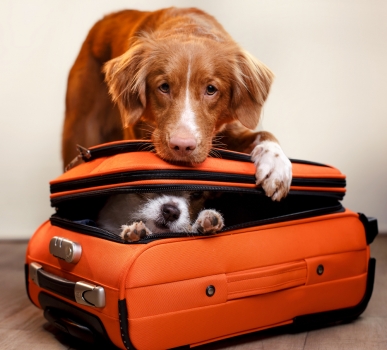 Having hunting dogs in motel rooms is seldom drama free
By
M.J. Nelson

Motels and hunting dogs were not exactly meant for each other, although if you were to ask the dogs, you’d probably get a different answer. A motel room would clearly be preferred over accommodations in a crate no matter how many comfortable amenities the latter might contain. After all, the motel has a big soft bed in a comfortably heated room, and they get to sleep with something other than another dog for company.

Over the years, the dogs and I have been “billeted” in a variety of motel rooms. Some, to be candid, would have needed a considerable upgrade to be classified as a “dump,” while others would have satisfied the pickiest prima donna. But those need-an-upgrade-to-be-a-dump quarters were better, as far as the dogs were concerned, than the finest crate padded with memory foam. As for their human hunting partners, a dry, burr-free dog makes a good sleep buddy after a long day of hunting even in five-star accommodations, but especially in those refuse heaps that would require major improvements to qualify as “no-star.”

While a lot of motels still prohibit pets, every now and then we – meaning the dogs and I – have run into owners that welcomed dogs. I’ve had motel clerks in the Midwest, Western states and prairie provinces of Canada ask me if the dogs would vouch for my character when I asked if they allowed pets. Several said they had never had to evict a drunk and disorderly dog in the middle of the night, nor had a dog skipped town without paying the bill. They also never had a dog steal towels, bedclothes or even the pictures off the wall.

On the other hand, I’ll bet few, if any, of their human guests poop on the rug at 2 a.m. hrs. This happened more than once, but one especially memorable occasion occurred following two days of hard hunting in Nebraska for pheasant and quail in weather conditions that could only be described as gawdawful.

By the evening of the second day of dealing with arctic winds that had clearly revved up somewhere in the vicinity of Santa’s workshop and gathered steam on their trip south picking up an icy mix of rain, snow and now and then, for variety, sleet along the way, the dogs were simply too fatigued to eat. When their supper was served, the two had tottered over, sniffed once or twice at the premium, high-performance dog food in the bowls, heaved a forlorn sigh and tottered back to their beds. Since they needed fuel, something had to be done to make their food so enticing that even an exhausted dog couldn’t ignore it.

It happened that the town in which we were staying had a truly wonderful steakhouse that featured the finest prime beef available in Nebraska and also had a chef who wouldn’t have been out of place preparing a state dinner at the White House. After a great meal of prime rib that had refueled the hunters, I asked the waitress if the chef could spare just a little bit of meat juice to convince tired dogs to eat some kibble. She said she would ask.

A few minutes later, the chef arrived at our table, plopped down on an open chair and after inquiring how our hunt had been, proceeded to regale us with the horrors of his hunt in similar conditions a few days earlier. When I rather hesitantly repeated my request for something to make dry dog food more palatable for tired dogs, he nodded and said, “Yeah, mine were in the same shape – be right back,” and disappeared into the kitchen. He returned a bit later with two large take-out containers, one marked “dogs” and the other “hunters.”

At the motel, when I opened both, I found the one labeled “dogs” filled with thinly sliced prime rib and the glorious boeuf au jus that had accompanied our entrée. The other take-out marked “hunters” contained a half-dozen French bread sandwiches piled high with that same thinly sliced prime rib. Clearly the chef was a man who not only knew his craft, but, being a hunter himself, also understood that hunters might be sorely tempted to save the prime rib and au jus for lunch the next day instead of giving it to the dogs unless they had something even more attractive to eat.

Now anyone whose brain was not totally numbed by fatigue would suspect that too much rich chow would rocket through a dog’s empty digestive system with roughly the same amount of thrust as a catapult boosting an F/A-18 Hornet from zero to 165 knots (189 mph) to get it off the deck of a carrier. But exhaustion seriously impairs judgment, and I dumped the prime rib and beef juice on the dry food, which the dogs, previously too worn out to eat, gobbled down like they hadn’t been fed for a month.

At around 2 a.m., the smell of dog deposits dragged me back to consciousness. When I turned on the light, I found two piles neatly arranged at the foot of the bed. Fogged by the methane emanating from the mounds of canine excrement, instead of grabbing an easily cleaned, stainless-steel dog dish to scoop up the mess, my brain instead locked on to the motel ice bucket, something you may want to keep in mind the next time you use one to chill a martini. Roughly an hour and a half later, spent thoroughly airing the dogs, cleaning up the mess, scrubbing the carpet and exhausting most of the contents of the air freshener spray I carry in my duffle to rid rooms of the odor of stale cigarette smoke or wet dog, I was grateful for two things: One was that we were hunting upland birds instead of waterfowl, which meant the dogs and I had at least another four and a half hours available for sleep before reveille, and the other was that I had managed to not walk through the mess as I stumbled around in the middle of the night.

The same could not be said for one of my hunting partners. He got up to answer nature’s call sometime after oh-dark-thirty on a Canadian duck-hunting trip and his bare feet squished through the sludge of partially digested dog food silently deposited on the carpet by a dog with an upset stomach. Actually, the mess was not so much on the carpet as on his underwear, which the dog had pulled off the clothes bench at the foot of the bed. While the mess on his skivvies made cleanup considerably easier, he noted that neither the barefoot sensation of wading through the upchuck or the fact that he was washing underwear in the motel bathroom sink in the depths of night could possibly be classified as pleasant experiences.

I diligently tried to avoid accommodations that were pet-unfriendly on hunting trips, but sometimes it was unavoidable, as “No pets” was the only available bed in town. On cold, snowy, nasty nights, after a day of tough hunting, it required a degree of hard-heartedness that I don’t possess to consign dogs that were as cold, wet and tired as I was to the drafty, freezing back of a truck, even with their crates wrapped in quilts. So, the only solution was to violate the “no pets” rule and sneak the dogs into the room.

Thankfully, my “crime” has mainly gone undetected. Only once have we been caught committing this offense, and that turned out to be a “free pass.”

The clerk at the front desk had eyed me with a great deal of disapproval when I checked in, and I couldn’t say that I blamed her, as cold, wet, muddy and tired, I definitely didn’t belong in the luxurious carpeting and expensive furnishings of the lobby area. However, I did have a guaranteed, late-arrival reservation and my gold credit card, which, on several hunting trips, had been worth the extra fee getting me past suspicious desk clerks looking askance at my frequently disreputable post-hunt appearance, was valid. With no good reason or even a bad one to decline to honor my reservation, the desk clerk more or less reluctantly handed over the plastic card that would unlock the room door.

It was late on that miserable night, so I hurried to retrieve the dogs from their crates in the truck. The two dogs and I had almost dragged our respective exhausted tails to the room when a burly guy, who epitomized motel security guards everywhere, suddenly appeared in the hallway. He first eyed me and then the dogs. I was cold, wet, tired and hungry, and the dogs were in the same condition. The last thing we needed was to have to look for a different motel.

I gave the guy a tentative smile and waited for the inevitable challenge. But he looked at me again and at the dogs. Then he continued on his way, but as he passed us he said sotto voce and out of the corner of his mouth, “Beautiful dogs. I’d love to own either one or both of them. Just be sure to take them out in the morning before seven so the management doesn’t see ’em.”

On one other memorable occasion, having removed my contact lenses because they felt like they were sandpapering my corneas, I mistakenly turned the motel thermostat up instead of down when I went to bed. In the middle of the night, I was roused by a pair of dogs panting and drooling on me. Instead of being a comfortable 60 degrees in the room, it was about 95. I got up, turned the heat down, then decided I better take the dogs out to give them both a chance to empty out and cool down. So, I pulled on jeans and moccasins but no jacket before I stepped out into the frosty night with the dogs. The room had been like a sauna, and my body had so much retained heat from the experience that the chilly air was very comfortable ... for a few minutes.

Bobby, one of my dogs at that time, seemed to possess unlimited bladder storage capacity, but when he did finally go, it was like waiting for Noah’s Biblical flood to subside. As he conducted his interminable whiz, I got colder and colder, shifting from one unstockinged foot to another as my hands, fingers and arms rapidly progressed to total numbness. I pleaded, “For godsakes, Bobby, hurry up and finish” — to no avail as an endless stream continued to water the ash tree he had chosen as his personal latrine.

Finally, when I was on the edge of hypothermia, the dog’s bladder gauge reached “E,” but as I turned gratefully to the motel door, I discovered, to my frozen horror, that sometime during that never-ending tinkle, even though I thought it was propped open, the door had managed to shut and the room key was not in my pants pocket. Surprisingly, I was still shivering despite the sheer volume of heat generated by my language when I peered through the window and saw the key mocking me from its perch on the desk.

It was not one of my finer moments.

© Dog News. This article may not be reposted, reprinted, rewritten, excerpted or otherwise duplicated in any medium without the express written permission of the publisher.
Fri, 09/09/2022 - 11:20pm