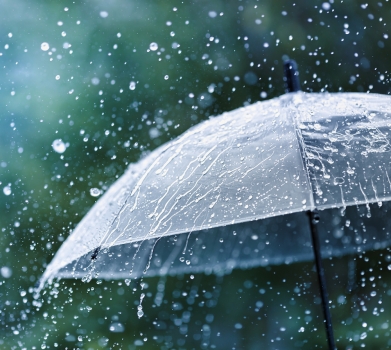 What weather conditions – summer or winter – justify the cancellation of a dog show?
By
Eugene Z. Zaphiris

To list every individual weather condition that would cause cancellation of a dog show would be futile, as invariably a condition may arise that was not on the list.

Handlers are a hardy group, but I am not so sure that is fair to the dogs.

A show should be cancelled when …

1. The weather makes it dangerous for dogs and/or people to be on grounds, i.e., very high winds that may topple tenting or lightning.

2. The grounds are flooded.

3. The CDC or state/county passes a guideline or restriction on gathering.

Shows should not be cancelled for weather prior to the show, unless there's an active National Weather Service severe weather warning (not watch) for the show date/hours and site within 24 hours prior to scheduled start of judging. If weather (or anything else) creates a dangerous situation during the show, it should be paused until the situation changes either such that judging can continue, or that the show hours expire. The fancy is much more experienced with severe weather volatility than it used to be, and this system would allow everyone to plan based on a central weather information source, and not have to wait on pins and needles to hear how the committee is feeling. Clubs should signal their participation in the NWS system in the premium list and judging program, so everyone knows what to expect.

The obvious answer is when safety of animals and participants is in jeopardy, or when the grounds will suffer substantial damage if used. When floods and blizzards occur, it’s pretty obvious when to cancel. But heat with humidity can be a good reason, although less frequently used.

I remember the first time I judged at Bucks, a thunderstorm was nearby, and lightning strikes were happening. I stopped my ring, but no one else did for another 10 minutes. I got a little stink eye from the rep, but I’ve seen what happens when lightning strikes. Luckily, the storm passed by quickly. That was a case where a temporary hold, not a cancellation, was appropriate.

This year I was scheduled to judge the Herding Group at Bucks. My assignment had already been delayed in 2020 and 2021 due to Covid, so I was really excited to judge this year.

But, alas, the phone call came in at 9:30 the night before, as I watched the weather on TV from my hotel room. Torrential rains, flooding, hazardous to everyone, let alone anyone trying to park at the site.

What a huge disappointment, but no one died due having a show that should have been cancelled. The show management did the right thing and kept everyone safe by cancelling. Good on them!

It’s a broader question, really, and it speaks to a dog club’s choices on WHEN they have a show (what time of year) and WHERE they have a show (inside or outside) and WHAT weather is typical for the area. But here’s my two cents:

Winter weather can be a safety concern and challenge in a snow/ice area if the show is outside. This should be a strong consideration of the AKC on show approval.

Summer heat can be a concern, but many outside shows manage that quite well. This is on the exhibitor to choose for themselves when it is too hot for them or their dog(s).

Extreme weather, tornado alerts, flooding rains, hail, dangerous winds. This is on the local government and the local club to determine when it is too unsafe for judges, exhibitors and dogs.

YES, cancellation of shows is not an easy decision, but in light of our drastic weather changes, we need to be much more aware of the dangers – winter ice, snow, freezing, summer heat, lightning and heavy rain – Michael Sauve once said, “Just remember, folks, in the big picture of LIFE, it is just a dog show – there will be more.”

I don't mind a cold day or a little rain. The factors for cancellation have to be the safety of the dogs and people and not ruining the show site for later use. Many facility owners don't want their lawn ruined and don't want deep ruts from stuck vehicles. If it is too slippery to walk or run around the ring, it is too dangerous to have a show. Thunderstorms are dangerous! On the other hand, we have judged a show in steady rain where the field was well engineered, and though wet and even puddled, the show could go on.

Torrential rain, thunder and/or lightening, tornados and hurricanes, extreme heat, extreme snow/ice that will cause electricity loss and/or make it unsafe to drive – basically, weather that will harm dogs and handlers.

Weather is too varied to make a single rule about it that covers all situations. I judged in Canby, Oregon, last summer when the temperature reached 115 degrees on Sunday for an outdoor show. The club provided hoses, wading pools and extra EZ Ups, but that’s not enough to ensure that no people or dogs DIE from the heat. That heat could have been a recipe for tragedy. There were massive absentees. In my opinion, that show should have been cancelled. If there is so much rain that people can’t gait without the danger of falling, that show should be cancelled. The rule of common sense should prevail.

Reasons to cancel a dog show on account of weather vary from area to area. Here in New England we have every reason imaginable, spread throughout our five or six seasons. What is more concerning than a show cancellation is the delayed start, followed by the words “But we’ll play catch-up.” Who does that help? Only the exhibitors in the first hour? Most probably those people and the judges are already there. If not, then the delayed time is helpful. Those in the next hour(s) are in a panic. When do they arrive? If shows who choose a delayed start would just delay all judging by a specified time, it would be much more acceptable. So what if the show runs over time?

The decision for cancelling shows should be made with simple common sense. When the safety/health of the exhibitors or their dogs is compromised, the show should be cancelled. Some of these decisions can be done preemptively with an ear to the ground for weather predictions. Some, unfortunately, occur the day of the event. I have been to two shows that were cancelled. One was for impending tornadoes (funnel clouds seen in the distance) and the other was for a cloudburst rainstorm that completely flooded an outdoor venue. The Toy dogs were actually swimming. The show-giving club does not have an Act of God committee.

1. Extremely hot weather (in the 100s) for an outdoor show ... unless there is some way fans can be put up at different parts of the show-ring areas … and water is available for the dogs and exhibitors. Dogs should not have to endure this!

2. Dangerous highways due to extreme rain or snow ... also where the vans are in mud and have to have a tow truck to get them out of the parking area. The safety of the exhibitors and dogs are more important than a dogshow.

3. Extreme winds and lightening where the tents (for outside rings) can blow away. I have been at such shows: The tents were flying away and we had to cancel the shows.

I think any weather conditions that threaten the safety of travel to and from the venue would be an appropriate reason to cancel a show! In the winter, snowstorms make travel hazardous and even once the storm is over, roads may not be cleared in the area of the show as quickly as we would like!

Summer heat offers other problems that make cancellations a necessity. Judges are out in the heat all day while the handlers can make sure their dogs are comfortable in motor homes. It becomes dangerous for those people, and once the temperature goes above a certain point, the show should stop for safety.

I was once at a show when a tornado went through. Happened so fast, lifted tent poles, ex-pens, ring gates all over the place! It was over in 10 minutes! The AKC rep cancelled the rest of the show as she should, but there were exhibitors who wanted it to go on. The show grounds were a mess. I’ve been at shows ankle deep in water and they weren’t cancelled. Why?

Cancelling shows is called for if the safety of the dogs, club members, exhibitors and judges is at risk.

This includes excessive heat, wind, rain and other acts of Mother Nature.

I often wonder why some shows aren't cancelled and have left on my own.

It just isn't that important for a possible win.

And I am pretty hard core after nearly six decades.

© Dog News. This article may not be reposted, reprinted, rewritten, excerpted or otherwise duplicated in any medium without the express written permission of the publisher.
Fri, 05/27/2022 - 10:42am