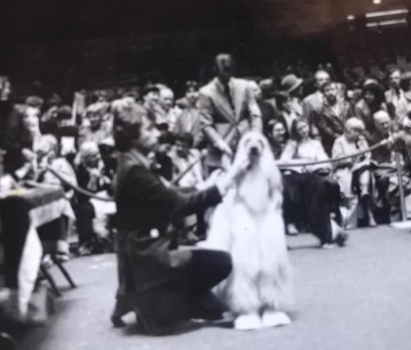 As the International Kennel Club of Chicago returns, what other dog event would you like to re-live?
By
Eugene Z. Zaphiris

Bring back the Associated Terrier Specialty in New York City the day before Westminster starts.

Held at the 168th Armory, it was a magical place for a kid who was just beginning to learn about dog shows.

At that show I met my mentor, Eve Ballich of Evewire, and fell totally in love with Wire Fox!

I would love to see it back!

It would be great to see Great Western Terrier show return to Long Beach, California, in June.

I would like to re-live my first dog show: Santa Barbara Kennel Club at the polo club grounds in 1971.

The experience was pure magic.

This was a benched show, with a lot of dogs, an elegant, glorious venue and I was mesmerized. After the show, there was Whippet racing. I knew then and there, I had found my new "world."

Another show I wish I could have a do-over with is the first time I walked into the ring with one of my dogs: 1973, Silver Bay Kennel Club, held at Balboa Park, in San Diego, California. I slipped and fell, and my bitch ran out of the ring and into the park. I ran after her, caught her in due time, and made a quick humiliated exit to my car.

Haven't fallen in the ring since.

Darn, now I have cursed myself, haven't I?

Bonhams “Dogs in Show and Field Auction” that coincided with Westminster. They always presented an eclectic collection from affordable ephemera right up to fine art, including many breed historical pieces. It was one of the highlights of the year for those interested in dog art and was very much a social occasion.

I would love to step back in time and into the ring at Westminster in 1983.

Westminster 1979, my second year exhibiting in the Best of Breed class at that prestigious show. I remember like it was yesterday.

Akitas were much more popular back then. There was a ring full of champions, and my first Akita Special, Ch. TOBE's Peking Jumbo, CD, was only two years old. I remember when the judge pulled us for the first cut! WOW, making the cut at Westminster was so thrilling! Then he made a second cut, and pulled me and Jumbo again. I was beyond thrilled.

After moving all of the second-cut dogs again, he pointed to me and moved me to the other side of the ring.... followed by the Winner's Dog, then a bitch special ... He pointed: “Best of Breed,” “Best of Winners,” “Best Opposite Sex” ... and Me and Jumbo were Best of Breed!

WOW ... as I walked out of the ring my friend Eric Gold took the dog... his wife Renee handed me a drink ... Alcoholic … LOL ... I drank it down. By the time I got to the exit of the arena area I was flying ... The drink? or the THRILL of winning? Got back to the bench. Jumbo was not in his crate ... and I couldn't remember who I handed him off to! A minute or so later, Eric appeared having taken Jumbo to the ex-pen before crating ... That’s a memory I wouldn't mind re-living!

I’m thrilled about the International Kennel Club being revived. I would also love to see the Detroit Kennel Club of old and the Tournament of Champions be revived. Detroit was such a great show for educating the public, and promoting our purebred dogs with the public. Sadly, that is missing today. I learned so much when I first started sitting on the bench with long-time breeders. Now we’ve become a show-and-go sport.

Well, it was a string of events, not just one – the New England Circuit. There was a special atmosphere, unlike the clusters in today’s world of dog shows. Starting out at the fairgrounds in Northampton and cruising up the Connecticut River to Woodstock and then beyond to Stowe and Burlington to the two shows in New Hampshire, Lakes Region and Carroll County. Each show had its attractions, such as the Border Terrier specialty at Woodstock, but all the circuit was enhanced by a New England summer. That circuit was great fun. To a degree the same atmosphere was present at Westminster’s June show in Tarrytown.

© Dog News. This article may not be reposted, reprinted, rewritten, excerpted or otherwise duplicated in any medium without the express written permission of the publisher.
Tue, 11/02/2021 - 8:58pm