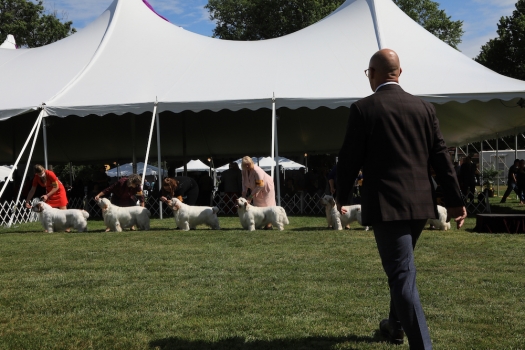 As we approach the 146th Westminster Kennel Club dog show, what was the first year you exhibited at Westminster, who was the judge, and did you get an award?
By
Eugene Z. Zaphiris

﻿My first experience was in 2012. I was showing one of our Clumber Spaniel girls. I was nervous as hell, especially as I really wanted the judge to like her … It was Dr. Donald Sturz. I was Best of Breed!

1975 under Mary Nelson Stephenson! I think we got Best of Winners.

I attended Westminster for the first time in the early ’70s. I just can't recall the exact year, but the breed judge was Doris Wear and it was unforgettable.

I was paid to show a dog for a friend in California. Flew out there, went into the ring, knew she liked the dog, but she measured him out, in front of God and everyone.

As I left the ring, in horror, I was surrounded by some of the most accomplished dog people of the day, including Herman Felton, Bo Bengtson, Sandy and Glorvina Schwartz.

They could see how upset I was. Trying to comfort me, they pointed out she must have really liked him (Doris did say that later) and what a lovely dog he was.

The owner was furious at me, but the dog WAS oversized!

The first year I exhibited at Westminster was in 1984 under Denny Kodner with a class bitch named C’est Bonheur Woodbine Tinsel. Tinsel was Winners Bitch and finished that day.

In 1985 I won Best of Breed there under Dorothy Welch with Tinsel. Finally, Tinsel was Best of Breed at Westminster three times and placed in the Herding Group in 1987 under Janet Wilcox.

It was 1968 when I first exhibited at Westminster. The judge was Hayden Martin. Winners Bitch in Irish Setters.

Our first Corgi and first show dog, Hank, was nearly three when we did Westminster in 2012; it was all still at Madison Square Garden. We flew in from Los Angeles and stayed across the street from the Garden at the Hotel Pennsylvania. As we entered the lobby, you’d have thought Hank was a rock star. People running around getting photos, videos and doing interviews … it was all about the dogs! Everywhere we went in the city, people would ask, “Is he here for Westminster?”

On our show morning, we walked in from the back grooming area (no benches that year); Hank suddenly stopped and looked around – Madison Square Garden was lit like daylight, and there were already a few thousand people in the stands by 8 a.m. So many people milling around, we had a hard time finding our ring. When you’re used to doing dogs shows on the bad end of a high school soccer field, this was indeed the “big time.”

We were out of the ribbons, but we came away with something we still cherish … a new group of Corgi friends from the East and Midwest. We were also heartened by people who came by after we competed. From their comments, and the cheers when we did our bit in the ring, Hank was the crowd favorite. He was the only tri-color Pembroke in the field of 10.

Was it fun? Yes, but it was also stressful. Would we do it again? We’ll let you know. Should you? Yes, at least once. There’s nothing like it.

“Hank” was GChG. Pennyshire Solid Alibi. We lost him in 2020, and miss him every day. We groomed and handled him ourselves, we were real proud of his career and what we learned together.

The first year I exhibited at Westminster (I had attended the year before), was in 1968 at the "old" Garden.

I showed my Dalmatian, Road Star's Major, under Albert E. Van Court, and won Winners Dog. The same dog, having finished at Westchester later in 1968, won BOB at Westminster in 1969 under Marjorie Siebern. That was the year of the big blizzard.

It was 2017 at the Garden. Handler M'Kayla Stahr took Best of Breed with my Swedish Vallhund, Intl Ch. GChB. Hightower Cub Cadet V Algutshof ROM.  I had a broken ankle and could not be there in person, but I did have the thrill of watching Cubby and M'Kayla on TV in the Herding Group. Dreams do come true. I have been watching Westminster on TV for many years, and one day I'll be there to watch in person!

It was a lifetime away, yet still my most exciting memory of a dog show. Westminster 1952. My mother and I and Pal (Vivacious Pal of Vilmar) drove to NYC, found the entrance to the basement of Madison Square Garden, and I took Pal and a little grooming bag to the benching area while my mother left to park our ’38 Packard. It was 9 p.m. and the loud crackling and booming sounds drowned out any evidence of barking dogs. I later learned that all the ice from the hockey game above had to be broken down and sent through shoots to areas below the basement in order to prepare for the dog show the next two days.

Although I had been successful at handling at the shows near my Rhode Island home, this was the first year at Westminster, and I soon realized that I was out of place at this very formal competition. I was entered in Children’s Handling wearing slacks and a jacket, and my dog was minimally groomed. I lived through that first day.

Since dogs were not allowed to leave until the end of the show on the second day, my mother and I watched all the final competitions. The Sporting Group was the beginning of what I remember as high drama. Our breed was English Setters, so we cheered for Ch. Rock Fall’s Colonel to win. Handled by his owner, Col. Bill Holt, the dog was magnificent in every way – moving with athletic grace, head high yet inclined forward and level with a happy flagging tail.  All that, while at the end of a six-foot lead. He won the group.

Then, the drama that would be written about for years to come: Best in Show narrowed to two great dogs handled by two of the greatest presenters – Col. Holt and Peter Knoop with the Doberman, Ch. Rancho Dobe’s Storm. It was a “heart-stopping event” each time the judge asked them to move yet again. The cheers were deafening.  When it was over and Storm had won the “crown,” few could argue the call. I have always been thankful that I was there to see this event – to see the best that was on that day.

The first time I was entered to handle at Westminster in the breed ring was 1953, and I had finished our first homebred, Ch. Prize ParSal of Stone Gables. I had learned to groom ParSal, and I had a new dress with a pocket and shoes to match. But as luck would elude me, the night before the show my pretty young setter came in season. Virginia Tuck, owner of Silvermine English Setters, helped me get over the disappointment by arranging for me to sit with the judges to watch the Sporting Group. I became the guest of Dr. Samuel Milbank, who was scheduled to judge the Terrier Group. I still remember our conversations about NYC and his insistence that I go to the Automat.

So it was 1954 when I finally made it into the breed ring and the Children’s Handling Competition at Westminster. I have the red and white rosette for taking Best of Opposite Sex with ParSal. And although I did not place in the handling competition, I did get to visit with Lydia Coleman (Hutchinson) again and to meet the winner for that day, George Alston with his Boxer.

My first time exhibiting at Westminster, 1982. Afghan Hound Blu Kareem of Grandeur. Can’t recall the judge. Didn’t win, but had a great experience.

My first year at Westminster was 2017 under judge James Reynolds. I have never received an award there, but my main reason for showing there is to show people that Border Collies come in other colors than black and white. My two girls are the only blue merle bitches to ever show at Westminster. Now if we can get some judges who aren’t color blind, it would be great.

The first Westminster I exhibited/showed at was in 1990. My judge was Pat Laurans, and she awarded my Cardigan Welsh Corgi Winners Dog and Best of Winners.

Although I'd been showing my dogs since 1983, I didn't get to exhibit at Westminster until 2016. The breed judge was Mr. Mark Kennedy, and he awarded BOB to my Chow, Neo, handled by myself. Several members of my family watched the livestream and congratulations flooded my phone, the best one being a picture of my teacher sister's second-grade class in Iowa all holding up signs saying, "You did it!" and "Way to go!"

Entering the group ring that night was so exciting to me, like a dream coming true, and I was so giddy that I wasn't nervous at all. My dog picked up on my enthusiasm, thrived on the excitement, and showed beautifully. Didn't make the cut, but it didn't matter. We had very the best time, and I will never forget it!

© Dog News. This article may not be reposted, reprinted, rewritten, excerpted or otherwise duplicated in any medium without the express written permission of the publisher.
Fri, 05/13/2022 - 2:29pm