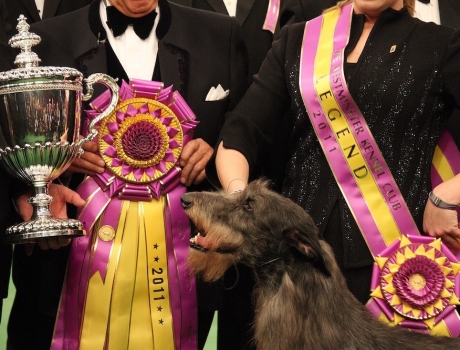 Which dog that went Best in Show at Westminster do you wish you owned?
By
Eugene Z. Zaphiris

There are two Westminster BIS dogs that I wish I owned. First is the Smooth Fox Terrier Warren Remedy. Smooths have been my breed since 1975, so that's a given. But Remedy won BIS three times, a record that I doubt will ever be broken. Most BIS wins and a Smooth Fox? That's a win-win.

The second dog I wish I owned is the Scottie Ch. Braeburn's Close Encounter. A Scotty was my first show dog, and it's my (second) favorite breed. One day I asked George Ward if Shannon was really that good to have won all she did. George tossed the dog up on a table and said, "You tell me." Not only would this spectacular dog have been mine – because my answer to George that day was "Yes, she really is" – but the greatest dog man of all time would have been my handler. What a dream come true. 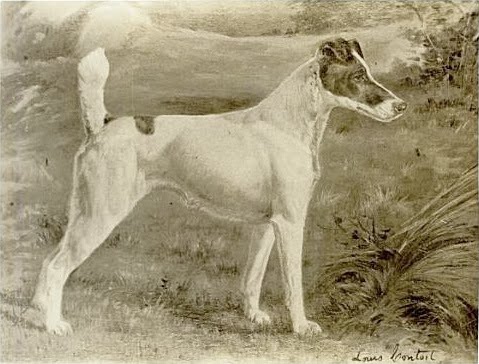 The Smooth Fox Terrier bitch Warren Remedy, Best in Show winner at Westminster from 1907 to 1909 -- the first three times the award was offered at the show, though the judges names were not recorded.

I would take home, with great joy, Rufus ... the Bull Terrier!

Why? Because he typified his breed standard, and he was a most engaging dog! Got to get “up close N personal” at the WKC winner party that was held for him and was thrilled to see he was exactly the dog I thought! His moving on to therapy work was just the icing on a most prestigious cake! Yup, I vote Rufus all the way! #rufusrocks

This is an easy one for me. Josh, the Newfoundland owned by Dave and Peggy Helming who went Best in 2004. I was attracted to this beautiful ambassador of the breed from the very beginning of his incredible career. His gentle disposition and magnificent conformation will always be remembered. 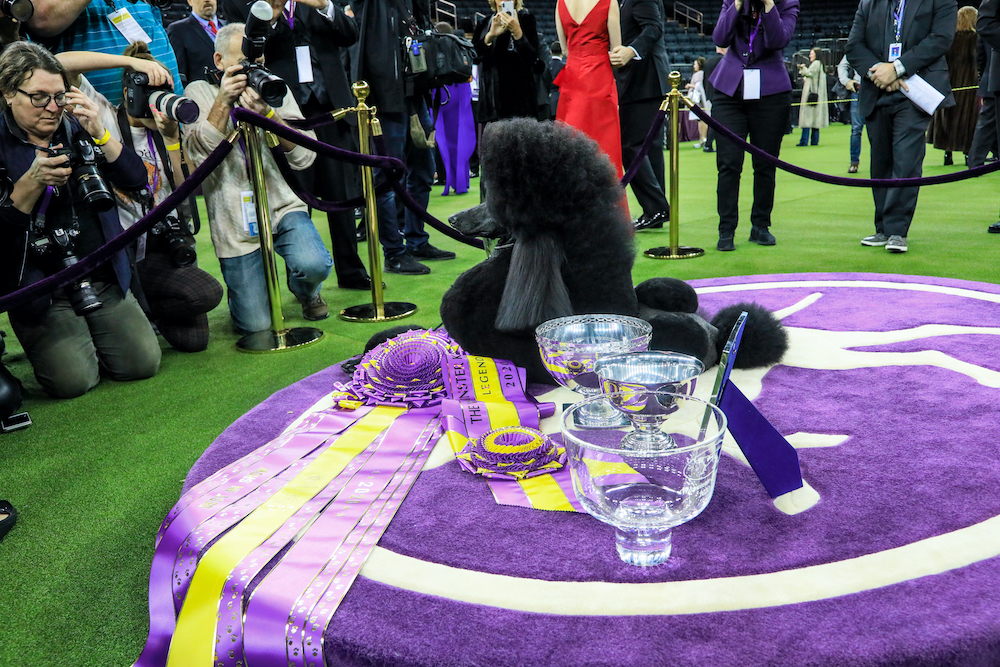 Since no dog of my favorite breed (Cairn Terriers) has ever won BIS at Westminster, I have to say I would enjoy owning one of my second favorite breed, Poodles. The ones that come to mind are the recent winner Siba (Standard) and Spice Girl (Miniature).  Just to be able to look at their gorgeous heads and expressions every day would be a joy.

That’s an easy choice. The Afghan Hound Ch. Kabik’s The Challenger was BIS at Westminster 1983. The year before I had given him BOB in a beautiful entry: Afghans were then still THE breed to watch, but I remember taking longer than was strictly necessary to make a pretty easy decision in order to make it look a little exciting … “Pepsi” went on to second in the Hound Group under Annie Clark that year, but he was No. 1 of All Breeds 1982 and won BIS at Westminster the following year under Derek Rayne.

Pepsi was perhaps the best dog I ever judged. I hate the term “He asked for it,” and Pepsi certainly didn’t. In true Afghan fashion he made it very clear that he didn’t give a damn what you, a dirty, low-life judge, did – he just KNEW he was the most beautiful … 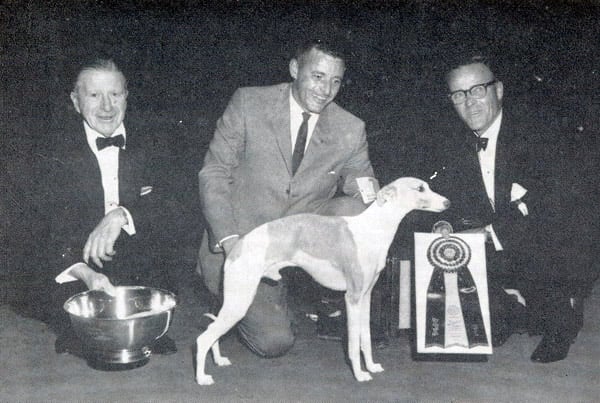 Robert Forsyth handled the British-bred Whippet Ch. Courtenay Fleetfoot of Pennyworth to BIS at Westminster in 1964.

Eng/Am Ch. Courtenay Fleetfoot of Pennyworth. "Ricky" sired my foundation bitch. While I never saw him in person, I did see a number of his progeny. To this day, he and his offspring figure prominently in my pedigrees, along with a number of other lines.

Now that is a very tough question! There have been so many wonderful dogs with type and style and attitude to fill that role. I have four that really got to me – OK, maybe five! Cede Higgins the Yorker that Anne Clark pointed to … Such a show man and so beautifully presented. Mick the Kerry Blue took my breath away just going around the ring. Condor the English Springer – Mark Threlfall and Bonnie, such talented people, and of course Julie who bred such type! And Manhattan the Shepherd: Wow – that’s all you can say, wow. Lord Brady the Norwich with Peter Green; the type he had and condition of that dog that night were wonderful. Just so many great ones. The list can go on!
Thank you for that question.

He just called to me.

That dog took my breath away the first time I saw him at Morris & Essex when he walked into the group. I had no idea who he was.  My friends and I all swooned. What presence he had.

We just KNEW he was a fantastic dog, even without knowing the standard by heart. As a former groomer and owner of a few Welsh Terriers, I had seen lots of terriers and a few Kerrys in my day.

I have always liked the temperament of the Kerry breed as well. 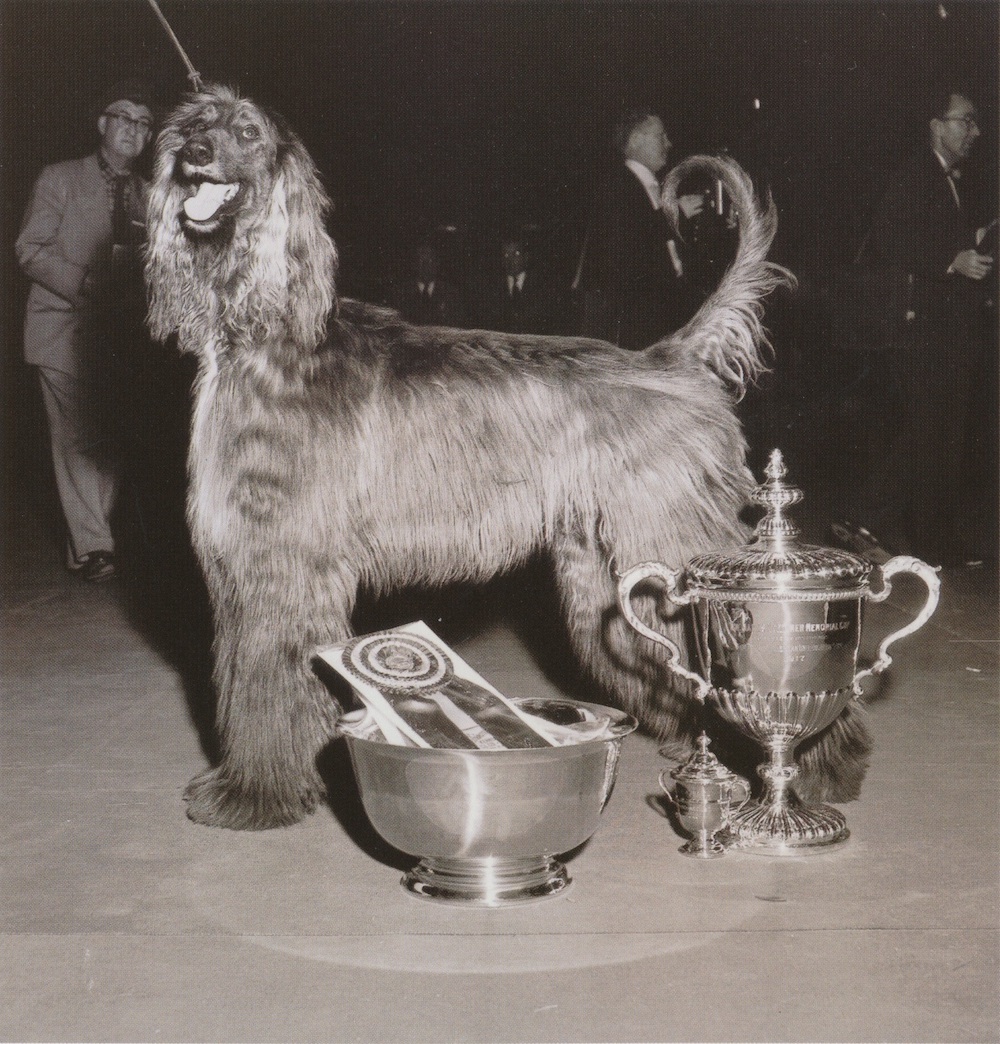 The Afghan Hound Ch. Shirkhan of Grandeur with all his booty from the 1957 Westminster Kennel Club show.

There are many group-winning dogs I would have loved to own. As far as BIS winners I would have to say the Afghan Hound Ch. Shirkhan of Grandeur, co-owned and handled by our mentor Sunny Shay. Being our heart breed, Shirkhan – aka "Chewy" – was the dog we based our beginnings on. Our pedigrees were filled with him and many of the old Grandeur dogs.

Rufus the Bull Terrier – aka Ch. Rocky Top's Sundance Kid. Just a beautiful example of the breed in both type and temperament.

BIS Ch. Shirkhan of Grandeur. Afghan Hound. His breeder, Sunny Shay, was truly a vital force in the promotion of the Afghan Hound. Shirkhan stamped his "king of dogs" look on generations of dogs that followed. He truly owned the ground on which he strode.

I was lucky enough to witness and own some of his direct progeny.

I saw Uno in a puppy sweepstakes when he was six months old and immediately knew he was a great one. I even inquired if he might be for sale. It didn’t surprise me when he went on to win BIS at the Garden. Undoubtedly one of the best Beagles ever.

I’d take almost any of them home as long as I don’t have do any grooming. No more stripping or brushing out dogs for me anymore. Been there, done that.

I would take home the 1952 and 1953 winner, Ch. Rancho Dobe’s Storm. He embodies what a Doberman should be in appearance and temperament.

I wish I had owned the Newfoundland, Josh! He was the perfect example of a working dog built for doing his job. He was absolutely breathtaking in the Best in Show arena.

Besides, as a Komondor owner, I love big dogs! 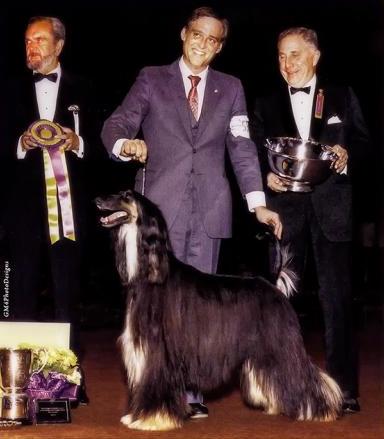 Ch. Kabik's The Challenger winning Best in Show at Westminster in 1983 under judge Derek G. Rayne.

Hands down, Ch. Kabik’s The Challenger (“Pepsi”)! I was around him quite a bit, had my hands on him, and he was a phenomenal Afghan! Not only was he a beautiful and correct mover, his temperament was great!

Oh, that is so easy! Torums Scarf Michael … the great one and only Mick! The most perfect specimen of a dog ever. We will never see his like again.

I would like to have owned Whippet BIS 1953, Ch. Courtney Fleetfoot of Pennyworth. He started me on Whippets, which I bred for 25 years and my son from juniors campaigned. (He was too small to show Ridgebacks.) Whippets are the most popular second breed for Ridgeback owners; they are not fragile, can play and keep up, and do not start fights. They are gorgeous, affectionate and good companions.

I would love to have owned Sky, the ginger-colored Wire Fox Terrier. She was one of a kind. Gingers are not a very common color in that breed, and she stood out in any crowd. I saw photos of her as she aged, and she still was beautiful. Type, style, condition – she had them all.  There were others over the years as well, but Sky is still my choice. My husband Fred would like to have the Kerry, Mick. 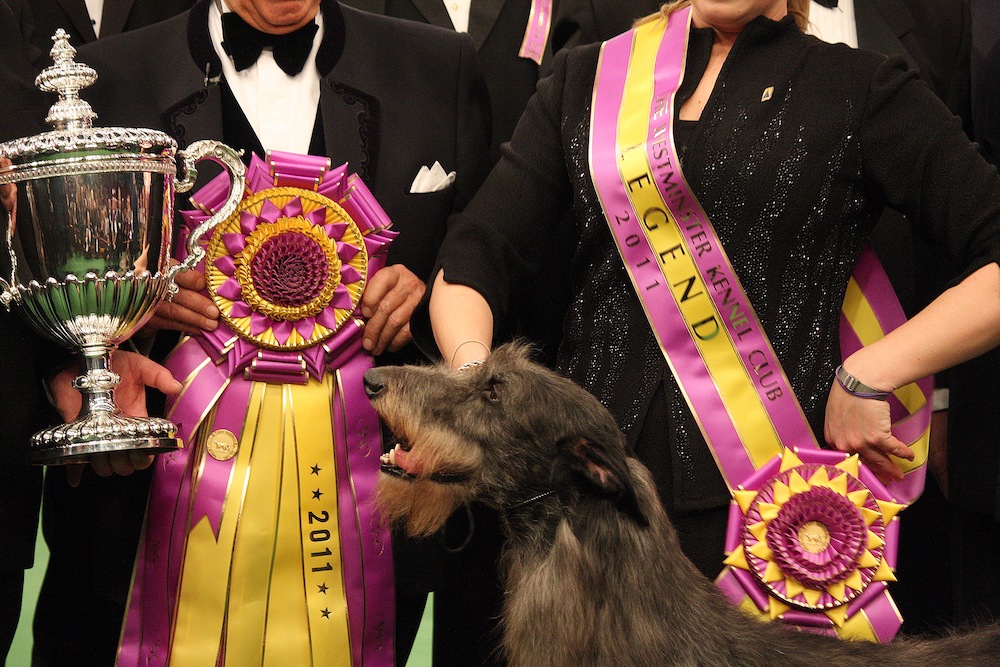 GCh. Foxcliffe Hickory Wind, topping the competition at Westminster in 2011.

Without a doubt —Hickory the Scottish Deerhound. Not only was she a beautiful dog, she had the best personality. I had the pleasure of showing our Afghan Hound and was directly behind Hickory at a show in Virginia. The two girls eyed each other and started to play. I really would have liked to see them both run the fields.

Actually, any other breed but the Poodle, German Shepherd, Beagle – the ones that always make it to the final groups. We used to have girls night and watch the show, but it’s so predictable. The dogs there are all the “Best”; it’s sad that the award doesn’t reflect that.

Carlee (Ch. Kan-Point VJK Autumn Roses), winner of Best in Show at the 2005 Westminster Kennel Club, so I could give her back to Val, where she belonged.

© Dog News. This article may not be reposted, reprinted, rewritten, excerpted or otherwise duplicated in any medium without the express written permission of the publisher.
Mon, 05/17/2021 - 10:01am