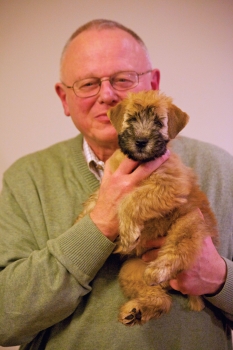 John was the son of Selma and Harold Mandeville, born at Ft. Monmouth, New Jersey, while his father was a member of the U.S. Army’s Signal Corps. After spending his youth in Fair Lawn, N.J., he attended the University of Vermont before following his family to San Francisco, where he graduated from San Francisco State College. He attended Washington University in St. Louis on a Danforth Fellowship, receiving his MA in history.

John grew up with dogs, including his father’s show dogs. An interest in Old English Sheepdogs led him to work at Henrik and Serena Van Rensselaer’s legendary Fezziwig kennels and breed a few litters. He would go on to be a board member of the Old English Sheepdog Club of America and author the DWAA award-winning The Complete Old English Sheepdog, published in 1981. He and his first wife, Irene, decided to “downsize” and began breeding “drop-eared” Norwich Terriers. When the breed subsequently split, the first litter and dog that AKC registered as Norfolk Terriers were John’s. One of his Norfolk bitches was the first Westminster BOB winner and first Group-winning Norfolk bitch.

But John’s real impact on dogs began with a 1971 “summer job” as an assistant to the American Kennel Club President Jack Lafore. He never returned to academia and spent the next 27 years doing almost every job there was at AKC. He created the first “A Day at the AKC” program in 1973, highlighting for the public everything AKC does and featuring its first computer systems. He shepherded many editions of The Complete Dog Book to completion, created the breed video series, took A Day at the AKC on the road, managed the AKC Gazette, headed at various times registration, judges, show operations and other departments, ran the veterinarian outreach program, and eventually retired as vice president.

Perhaps the initiative that meant the most to John was the establishment of the AKC Canine Health Foundation. John believed one of the most important things AKC could do was to fund research to improve the health of dogs; at AKC he had worked with research partners and the veterinary medicine community. The concept of the CHF, however, was different: it would be a permanent, well-funded organization to support research. The AKC-CHF was established in 1995 with John serving on the founding board. At its 25th anniversary in 2020, the CHF could boast of having invested nearly $60 million into canine health research.

After retiring from AKC in 1998, John launched a column, “Inside Out,” in the weekly publication Dog News. At times humorous, at times a thorn in the side of his former employers and at times thoughtful about dogs and their people, it was popular; John rarely attended a dog show that someone didn’t have something to say to him about one of his columns … or whisk him away to say, “You should write about …” In the first column, he set forth the ground rules … “So what about the dogs? It’s exactly why we’re here. We should be certain they’re never far from our thoughts.” For the 13 years John wrote the column … and for all the years before and after … they never were.

John’s retirement included becoming the chief puppy and dog wrangler of Banner Soft Coated Wheaten Terriers, the breeding program of his second wife, Pam. Together, they bred and owned … and often owner-handled … 25 champions and John’s special canine project, one reluctant obedience titlist. He also experienced firsthand the results of some of those AKC-CHF grants that supported the discovery of a DNA marker test for PLN in Soft Coated Wheaten Terriers.

John was a brilliant, funny, strong-willed and soft-hearted man … a big personality. He will be missed throughout the dog world … and for his non-dog-world friends, what he wrote about going to dog shows a few days after 9/11 may help explain that:

“…in a world in which 3,000 people went to work and were massacred before mid-morning, it was important and comforting to see people you’re used to seeing every week, that you have a connection to … sometimes close, other times that tenuous dog connection where you barely know their lives beyond dogs … and know they’re OK. I’ve always thought it appropriate to view the dog world as an extended family … and for many, it was important to be with all their different families in the aftermath.”

He will be missed even more by the family he left behind. He is survived by his wife, Pam, his son Henry, grandson Jack, sister and brother-in-law Joann and Anthony Giovannoni, and brother Scott Mandeville … and Pinch, Berry and Sprite.

Donations in John’s memory may be made to the AKC Canine Health Foundation, the SCWTCA Endowment, the Alzheimer’s Association, the Association for Frontotemporal Dementia or World Central Kitchen.

© Dog News. This article may not be reposted, reprinted, rewritten, excerpted or otherwise duplicated in any medium without the express written permission of the publisher.
Fri, 05/27/2022 - 1:25pm