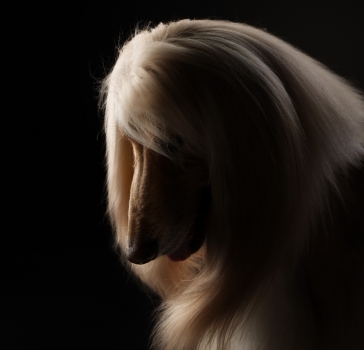 To Trim or Not to Trim

... or, when less is really more
By
Richard Souza

To quote Henry James, “One can tip too much or too little, indeed the coin that buys the exact truth has not yet been minted.” The same might be said about trimming. In this case, trimming Afghan Hounds.

I’ve used the word “peculiar” in a couple of different ways while discussing the breed, mostly with reference to the written standard. Now I apply it to the real world — that is, the real world of the show ring, which is, in and of itself, an oxymoron. The show ring is anything but real when it comes to the Afghan Hound and its natural state.

I’ve mentioned that the standard describes the Afghan coat as having a peculiar quality and continues to state that the breed is to be shown in “its natural state.” We all know that Afghans are shown in their natural state, right? If you buy that, I’ve also got a bridge I’ll sell you. What I, personally, find peculiar is the lengths to which some exhibitors go to get their dog/bitch to its natural state.

The show ring is, by definition, a show with a capital “S” — a competition with elements of beauty contests and production numbers. The better you can make your dog look, the better your chance of winning. Would a Miss America contestant walk (in this case, trot) down the runway with her hair in curlers or without makeup on?

The process of getting the “contestant,” the Afghan, into the ring often includes (God forbid!) trimming, an official no-no. But a reality. Sometimes the work is so obviously done it makes me catch my breath. No discretion. No subtlety. No common sense. Sculpting that often approaches the extreme of the Poodle or the Terrier. Trimming. Another dead horse to be beaten in that there have never been any serious steps taken to eliminate it in the Afghan.

I’m here to show a few examples of trimming this particular breed’s coat into its “natural state.” (As an aside: These photos would have the early pioneers of the breed turning over in their graves were they able to see them.) And to give a time-related perspective on preparation and grooming in general: Comparing the extremes of grooming today to the days when Mike and I started in dogs is like comparing an iPhone to a black rotary dial. We used to go to dog shows with a folding card table to groom on and one shared pin brush. Were those the days, my friends?

Put aside what we Afghan folks, gluttons for punishment that we are, currently put ourselves through to achieve the natural state. First the products: Shampoos, rinses, conditioners developed to deal with dry coats, curly coats, enhancers to give more volume and body to fine coats. Take your pick. Some expensive, some not as. They provide as many choices are there are chips on the grocery-store shelf or colors on the paint-chip wheel. And it’s made easy. You don’t have to leave home. Online shopping. Delivered right to your door.

Then, the application — the bathing, the blow drying, followed by ear wrapping, banding stifle hair and sometimes banding the side coat, all to preserve up to the last minute the fruits of your labor — several hours’ worth — for that final three minutes down the runway. If you’re showing more than one dog? Well, do the math on time and effort.

But, before, after, and/or in between, there is a surreptitious step (almost) always taken in private and behind closed doors — the one that adds the finishing je ne c’est quoi to that natural state: Yes, I refer to trimming, including but not limited to, scissoring, stripping, stoning, etc., and one technique I suspect not many people are aware of: tapering. Yes. Very thin candles, lit. (For more information on this one, private-message me.)

Let’s face it: Trimming is here to stay as long as there are no penalties for it. I can pound on the podium and repeat, “You shouldn’t do it. You must not do it,” until I’m blue in the face. So can you. But until there is some concrete repercussion, it’s a fact of show life and one of several reasons I advocate that all highly patterned dogs (of proper quality) be shown. The comparison to sculpted exhibits would be dazzling. Not only is the patterning a correct breed characteristic, dogs/bitches that are coated in this way are already in a natural state and stand in stark opposition to what you will see below. The examples I offer are very extreme and in real life are done in various combinations and degrees. Even so, trimming is trimming, and it doesn’t take much to school your eye to detect it. Judges, take note.

My questions are two: How much of this je ne c’est quoi is too much? And is there anything that can be done to eliminate or at least mitigate the worst, shabbiest, amateurish hack jobs?

The answer lies in the “farmer’s eye fattens the calf” premise mentioned in my last column. The palatability of stripping, trimming, sculpting, 10 blading, etc., depends on the hand that holds the tool. The artistry, if you will, of the groomer. (Artistry. Hmm. My vague and flowery side is showing.) Am I advocating trimming? Absolutely not. Is it going to happen? Absolutely.

Let me be up front. I’ve been as guilty as the next guy when it comes to “tidying up” a coat — in other words, ignoring the dictate of the standard. But, as in so many other things in life (and dog shows), if you’re going to “tidy up” at all, for God’s sake, learn how to be discreet about it. Undectability is what you want. That works as the only feasible compromise I can think of in a situation where presentation has surpassed purpose. So, what do I mean? No 10-bladed saddles, faces, necks or tails. No saucer feet. No flagrantly even underlines. In fact, no flagrantly even anything.

Here are a few examples: 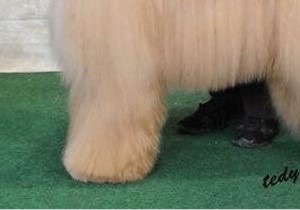 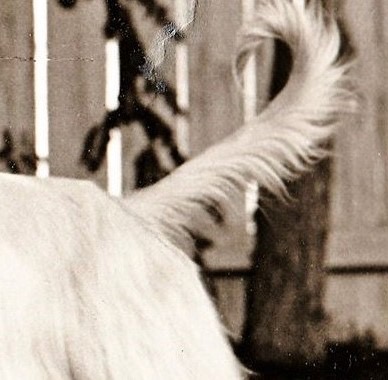 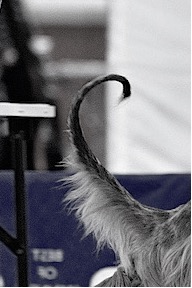 And topknots? Topknots have gotten as out of hand as side coat. They are sometimes reminiscent of either a trip to a ’60s beauty shop, i.e., backcombed into a near beehive; or sometimes in a combination combover as seen on young 19th-Century Englishmen in a Merchant Ivory film, such as …

Instead of simply allowing the hair to fall any way the wind wants it to:

I can think of only one thing that would encourage exhibitors to practice discretion. (If you out there have other ideas, please share them.) It’s an idea that didn’t come from any creative thinking on my part. It was Mike Dunham’s brainchild decades ago, and at that time, we tried to create some momentum for it. The result: little to no enthusiasm from any corner. So, what’s the idea? Change the standard. Nothing radical. Just add a disqualification. Something like: Disqualification: trimming, clippering, stripping.

Short of something as iconoclastic as this (which I doubt would stand a chance of gaining any traction with the powers that be), judges have to use their own discretion on how to handle an obviously trimmed, sculpted coat. Sadly, this means not handling it at all. Giving the exhibitor a pass on it even though in many cases it’s so easy to see. Flagrant is flagrant. It’s hard not to see.

And here’s where I tell you judges out there a Babbie Tongren story, one that may give you the courage of your (our) convictions. It was told to me by Babbie herself after an assignment in a (to be unnamed) foreign country sometime in the ’70s or ’80s. “I had a large entry with an especially big Open class of dogs,” she said. “I walked down the lineup horrified at what I saw. I made a radical decision and excused nearly half of the class without moving or even putting my hands on them. The ones I sent out of the ring were so glaringly trimmed and clipped, I couldn’t stand it. It was insulting. A f*** y** to the standard. I had to make a point.” And she did.

I can’t think of many (or any) judges today that could do that, myself included. Even though we may want to. It’s more easily said than done. Unless you’re Babbie Tongren.

Why couldn’t we just start with making clippering and trimming a disqualification? And see what happens.

© Dog News. This article may not be reposted, reprinted, rewritten, excerpted or otherwise duplicated in any medium without the express written permission of the publisher.
Sun, 08/22/2021 - 3:36pm