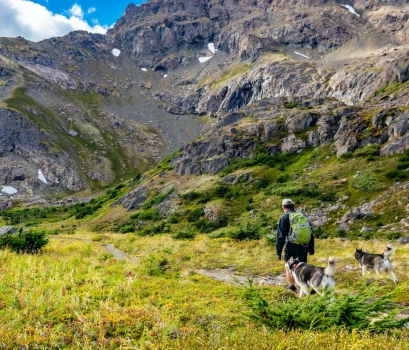 In 1960 (yes, Virginia, there really WAS a 1960, and some people who lived then are still alive), Johnny Horton recorded a hit song, North to Alaska.

Later that year, John Wayne, Stewart Granger and Capucine starred in a movie with the same title. The movie depicted Alaska in a semi-comedic way as an exciting, rough-and-tumble territory. From 1990 to 1995, Northern Exposure was a hit TV series set in the fictional small town of Cicely, Alaska. The show centered around a New York City native who is sent to practice medicine in Alaska to repay the state for subsidizing his education.

To a certain extent I felt I could identify with the “fish-out-of-water” Rob Morrow as he encountered a myriad of unusual, quaint and sometimes weird (for someone from New York) Alaskan residents. (The show received 57 TV award nominations, winning an Emmy and two Golden Globes.) I was addicted to the show, and the fact that Janine Turner was the female lead may have had something to do with that. These things added to my fascination with the image of the state of Alaska.

Alaska was one of the very few states in which I had not yet judged. I was invited to judge there in 2020, but was advised by my doctor that the time was not right for me to travel just then during the pandemic, so regretfully I had to cancel my assignment.

Therefore, I was delighted to be asked to judge there again in 2021, and I readily accepted. I must admit now that I did not realize that this assignment was a two-a-day show assignment, but because it was Alaska I probably would have accepted anyway.

Getting to the show location is not the easiest thing. The choice is to fly into Anchorage and then either drive three hours to the show location in Soldotna (the motel was in Kenai) or take a “puddle-jumper” flight from Anchorage. So, I flew from Phoenix to Seattle, and then connected to a flight to Anchorage. I decided to rent a car and enjoy the three-hour drive through the countryside from Anchorage to Kenai. (OMG, when are rental-car prices going to get back to normal?)

The road was a pretty good one that wound along the Turnagain Arm, which is off the Gompertz Channel. At times the water level was very close to the road, and I always had to be alert for bear, moose, caribou or other animals. There were also small lakes all along the way.

The hills were very green, growing right up into the starkly rough mountain area. We have some tough, primitive areas in Arizona also, but the stark contrast of the greenery with the rocky terrain was beautiful. It was easy to see why so many think of Alaska as so beautiful, and it is still considered an area that has not been completely explored.

I was going to meet with Eric Liebes and other judges for dinner at 6 p.m., but did not get to the motel until almost 7 p.m. It turns out that the restaurant – Louie’s – that is attached to the Uptown Motel was packed, so I was able to meet up with Eric, Jimmy Moses, Darryl Vice and Linda Scanlon in time for dinner. The restaurant was packed – as it was every day we were there. I guess a lot of people read the Google statement, “The best time to travel to Alaska for fishing tends to be in the summer months of June, July, and August for peak season. During these months you can catch the end of the King Salmon season, and peak times for Silver, Red, Pink and Chum Salmon.” When the locals are added, Louie’s is a very popular place.

I ordered halibut for dinner – what else (besides salmon) would I eat while in Alaska? Without a doubt, this was the best-tasting halibut I have ever eaten. It was so good that I even ate the vegetables that came with it. The walls of the restaurant were crowded with trophies of local wildlife. There was a huge fish above the bar, and I was told it was a halibut. I had no idea how big this fish can get. According to Google, “An Alaskan halibut can grow to be 8 feet long and 5 feet wide, and weigh 500 pounds. Because of their size, adult halibut have few predators —mainly sharks, marine mammals and humans.” It is a huge fish. (Wow, think I went out on a limb with that statement?)

The weather for the show itself was not great. It was cold (for me – not the residents of Alaska) and raining most of the time. But at no time did the weather dampen the mood of the exhibitors. They always seemed to be happy to be there and to have the opportunity to show their dogs – win or lose. That was a real pleasure to see. Over the weekend I judged three groups – Terrier, Sporting and Hound – so I got to see a good cross-section of breeds and exhibitors.

As you can imagine, there are a limited number of dog shows (and performance events) every year in Alaska, so each one is especially important to Alaskan breeders and exhibitors. However, we need to remember that quality is not determined by quantity.

Any discussion of this show – and the Kenai Kennel Club – would not be complete without acknowledging the wonderful hospitality shown to us. My new best friend is the hospitality queen who saw to it that all judges had enough to eat. She even made homemade salmon chowder for us one day. I could have just eaten that every day. Chowder, pork chops, lasagna, salads, cold cuts, chocolate cake, cheesecake, cookies – I wouldn’t be surprised if we all added to our “Covid pounds.” Thank you.

I took a few minutes each day to ask a couple of exhibitors how they wound up in Alaska: Were they born there, or how did they get to move to Alaska? Some of the stories were very interesting. One young lady told me her father had hitchhiked from Buffalo to Alaska when he was a young man. Another told me when her father was a young man, he always wanted to move to Alaska to be a guide and hunt and fish – and so he did.

The last show – on Sunday – finished pretty early, so Eric and I took a couple of hours to drive around and get a “feel” for Alaska. Eric had been here a couple of times before, so he was my de facto guide. We drove through Soldatna, and went to a “park” along the Kenai River. This area had a narrow “boardwalk-type” wooden bridge that ran along the river. About every 40 to 50 feet, there were steps that went down into the water. Those wishing to fish would just walk down the steps (wearing hip waders) and start casting into the water. This was one of the times for the “salmon run,” in which the salmon aggressively swim upstream to breed. This type of fishing was really a kind of grappling where you could catch a fish as it swam by or you can “fly-fish” from these steps.

We then drove to an area that is an outlet of the Kenai River and the Cook Inlet. Unfortunately for us, it was low tide, but I did learn how residents here do “dipnetting.” Google again: “Dipnetting is a method of fishing used for catching salmon and hooligan that's available to Alaska residents only. It entails using a long-handled fishing net up to five feet in diameter, and dipping it into a river to catch unsuspecting fish swimming upstream.” I am by no means an avid fisherman, and I have to admit I had never seen anything like this.

The only slightly negative part of judging in Alaska was the lengths of the flights, but I so enjoyed my visit to the north that it was absolutely worth it, and I would do it again.

I also had something happen while judging in Alaska that I am willing to bet no other judge has ever had happen in the history of dog shows. Just as I walked over to write a number in my judge’s book, a large bald eagle flew low over my ring and dropped about a 4-foot-long branch into the center of my ring. He then “buzzed” my ring, circled, and flew off. I am not sure if he was inviting me to visit his “home,” or if it was his commentary on my judging. Actually, I think if it was the latter, it would not have been a branch that he dropped.

© Dog News. This article may not be reposted, reprinted, rewritten, excerpted or otherwise duplicated in any medium without the express written permission of the publisher.
Tue, 08/10/2021 - 6:35pm