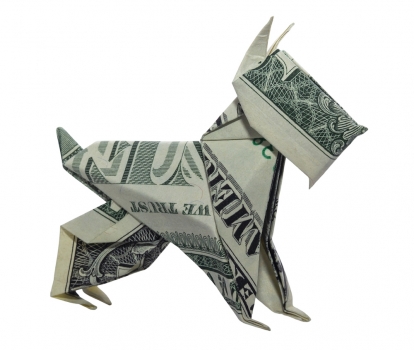 The Business of Show Dogs

How do financial considerations affect our sport?
By
Sid Marx

For many people, putting the words “dog shows” and “business” in the same sentence would be, at the least, incongruous and, at the most, perhaps even sacrilegious.

I am “one of those” who continues to try to convince myself that conformation shows are still to help breeders display and improve their breeding programs. Even CNBC.com has said, “Although many people show dogs for fun, the real purpose of dog shows is to evaluate quality breeding stock in order to maintain the integrity of the breed. A winning dog has good conformation (appearance and structure), which makes him or her likely to produce high quality purebred puppies.” And yes, I can see most of you smirking at that statement. Truth be told, maybe “the business of dog shows” is not so incorrect.

What if we compare showing dogs to other “businesses” that might not sell a product directly to a consumer? What about sports? Certainly, baseball and football would be prime examples. Many of us played both of these sports as youngsters – some of us even into our college years and beyond. Both of these sports are certainly for fun and personal entertainment, but when they reach the “top level” of Major League Baseball and the National Football League, the entertainment is still there, but both are most certainly businesses. As a matter of fact, there are very few businesses anywhere that are more successful or profit oriented than the NFL.

The similarities are obvious. We start out by buying a dog because of love. When we find out about the local match shows, our love expands to include competition and fun. From there it is not a huge leap to where our dog shows are today. And today’s dog shows are big business.

Still think money has very little to do with our dog shows? How many people do you know who were financially affected when the Covid show moratorium hit? Professional handlers either had to find other jobs or dip into their savings. With more people staying home, boarding and show kennels operated at much less than capacity. The one area that saw an increase was puppy sales, but, unfortunately, as people return to work, many of these are now being returned or abandoned. Thankfully, ethical breeders are there to take their dogs back.

Although the Mission of the American Kennel Club states, “The American Kennel Club is a not-for-profit organization dedicated to upholding the integrity of its Registry, promoting the sport of purebred dogs and breeding for type and function,” anyone who has ever read the AKC financial statement quickly realizes that this is a major business. Taking it a step further, it has also been obvious from the drop in registrations from its heyday that it is not as a registry alone that keeps the revenue, investments, salaries and retirement programs flowing. Income from dog shows (significantly including performance events) is a major revenue source. Maybe this is one reason AKC continues to add breeds – even those with temperaments that may be less than desirable – hoping to attract them to shows and performance events.

How about our all-breed and specialty breed kennel clubs? How many would survive without dog shows? For most clubs, dues income alone is not enough to survive. Successful dog shows add to the bottom line.

What about individuals?  Is money involved? Here are some quotes from CNBC.com again:

“… the owner of a five-year-old Cardigan Welsh Corgi … says that she invests around $7,000 per year on traveling. Costs can vary dramatically depending on how much owners are able, and willing, to spend. Leading up to a big competition like Westminster, top competitors typically “campaign” for a year to garner interest in their dog. This can add up to more than $250,000 when you combine the costs of travel, entry fees and a professional handler, since handlers are common and range in price from $100 to $300 or more per show, depending on their experience level.”

“Maintenance costs vary by breed as well. While … describes her Corgi as “wash-and-wear” compared to other breeds, it takes … a long time to clean and dry (a) Puli’s cords. He grooms his dogs himself and says the most expensive part of taking care of the breed’s dreadlock-like coat is conditioner, which runs around $25 per bottle. … uses two bottles per dog per wash, as well as an arsenal of other products. If you’re using high-quality products, you pay high-quality money.”

One of the largest costs associated with showing isn’t specific to the dog at all – it’s the price of traveling to out-of-town shows. Between transportation and hotel fees, travel expenses can add up quickly, especially for owners who frequently take to the road. As a matter of fact, the American Kennel Club has a brochure that is used to show politicians and businesses how much money a show can bring to their town.

But all of these finances have nothing to do with what occurs in the show ring. Or do they? Just take a look around the show rings. In the classes that are competing for championship points – in many breeds – there is a reasonable split between owner-handled dogs and those shown by professionals. Furthermore, most of these dogs are owned by “normal people.” However, as we look at the dogs who consistently are in competition for Group wins and Best in Show wins, we find as many “backers” as we find “normal people.”

I will go out on a limb and state that I doubt many of these backers have ever petted the dog they “own,” much less had it in their homes. If someone wishes to help finance a dog’s show career that is certainly his prerogative, and I have no problem with that. But to think that those who provide financial support to more than one dog will continue to do so if these dogs do not win – and win big – is unrealistic. So how does this money affect wins?

It takes serious money to hire the most successful professional handlers, and this is understandable because these handlers work extremely hard to keep their dogs in the best condition and training, and show them to their absolute best possibilities. I have the utmost respect for MOST professional handlers, and consider many of them to be friends. But they are not in the ring just for enjoyment.

How many people can be at shows every week? How many can exhibit at all those shows held on Tuesday, Wednesdays, Thursdays? Remember when dog shows were almost exclusively a weekend thing? That was because people had to work for a living and to pay to go to shows.

What about advertising? How many “normal people” can afford to have ads in every dog publication week in and week out? What’s that? You say advertising should not have an effect on judging decisions. I absolutely agree. But … exactly why do you think the top dogs are advertised so extensively? Is it because the backers are altruistic and just want people to see how pretty their dogs are?

So, if the fact that dog shows are a very real business disappoints you – get over it. It is a reality. However, that does not mean that the “average person” cannot successfully compete at shows. Many do, and to be honest, their enjoyment level is probably greater than those who just pour money in to make a dog highly rated. There was a time that my wife showed her little speckled dog on her own – and with zero advertising – to be ranked as number one in its breed for many years in a row. More than one “big-time” handlers asked to show this dog, and most stated they could make him Number One Dog. Guess what? We KNEW he was the NUMBER ONE dog, and we loved doing it on our own – and the dog was much happier being with his beloved human!

At a recent show, the heat and humidity made it very uncomfortable. A couple of those “big-time handlers” chose to rest the dogs they were campaigning, because they were not handling the heat well. Thank you! These handlers understood that the dog’s well-being was absolutely worth more than that extra rosette or win. I applaud them.

At this same show, the club offered a rosette for the BREEDER of the dog who won Best in Show. What a great idea.

Just a hint … clubs should consider using rental cars instead of personal vehicles to transport judges. There is significantly reduced liability to the clubs should there be an accident.

© Dog News. This article may not be reposted, reprinted, rewritten, excerpted or otherwise duplicated in any medium without the express written permission of the publisher.
Tue, 09/07/2021 - 3:04pm