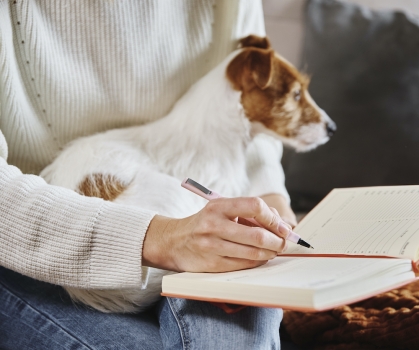 Diary of a Show Dog

In 1961, The Agony and the Ecstasy, a novel by Irving Stone, was published depicting the life of the iconic stonemason Michelangelo (di Lodovico Buonarroti Simoni), who was a true Renaissance Man – sculptor, painter, architect and poet of the High Renaissance period.

Michelangelo went through real physical agony – imagine the pain of lying on your back for more than four years to paint the frescoes on the ceiling of the Sistine Chapel depicting Adam during the Creation. He also endured mental agony as he questioned his painting ability, his religious beliefs, and the constant battles with the man who commissioned the painting, Pope Julius II.

Looking at the title of that great novel – and later a movie with Charlton Heston and Rex Harrison – made me think of this past weekend, and then further, about what it is like when we start showing a new dog. Certainly nothing that we face as we choose to be part of the dog community and show dogs matches the kind of agony faced by Michelangelo (except when we help one of our dogs crosses the Rainbow Bridge), but there are some very real emotions involved. I just went through a weekend having my (new) dog shown that fully illustrates the agony and ecstasy we go though as we pilot a dog through a show career, and I think maybe if I share this with you, we will all know we are not alone. Maybe it will help newer exhibitors and serve as a reminder for the more experienced.

This past weekend I had my Irish Setter – Trace – shown for the first time indoors. I say I “had him shown,” because this old body just can’t move with an Irish Setter any longer. As a matter of fact, Trace has been shown a very few times in total.

Let me set the stage by reminding you I am not a newbie – I started showing dogs more than 58 years ago – so I certainly have had my share of successes and “failures.” I will also tell you that when we got Trace it was because I just wanted an Irish Setter in my home again – not necessarily to have a show dog. But when I saw him stand, put my hands on him, and watched him move, I knew he was an extremely good breed representative, and certainly should be shown. So, I leaned on my great friend (and superb Setter handler), Shaun Jordan, to show him. When Shaun saw him, he agreed with me.

Preparing for this show weekend, my wife did a lot of work with Trace’s coat and grooming. We also had another friend, MJ, groom Trace. This may sound simple, but with a dog who has such little experience, it was not that simple just to get him to stand still for his grooming. Let me also state that Trace has only been part of our family for a little over four months, and as a friend reminded me, he basically was like a puppy except he was fully grown.

I had complete confidence in my dog’s quality, Shelly’s prep work with him, and Shaun’s handling and finishing touches on Trace’s grooming. The first show proved this out. In my opinion, Trace looked absolutely beautiful stacked, and moved well. He won Winners Dog. Shaun had to go show his English Setters, so Amber (Lambie) Nash took Trace back in, and Trace went Best of Winners for his first major. (Thank you, Amber). This was going to be easy, and so I started planning his specials career!

Then came the rest of the shows. I still don’t know what caused it, but for the next times in the ring, Trace saw ghosts and just didn’t want to move on the “go-around.” He absolutely destroyed how he looked. We worked with him in the evening, and if we could spend 15 to 20 minutes calming him down when showing him, he would do fine, but unfortunately a judge only has two to three minutes to give a dog. It was obvious that the judges really liked him, and gave him many chances to move, but Trace was only getting more and more stressed. Finally, I pulled him on the last day, thinking that he is too good a dog to be seen like this, and I certainly didn’t want to stress him out anymore. It was apparent that we had a lot of work to do.

You cannot imagine – or maybe you can – how disappointed I was. As I walked around the show grounds, I realized that I was not alone. As people passed by me, in addition to those who were delighted with their wins, I saw faces that showed exhaustion and disappointment from unfulfilled – maybe unrealistic – expectations. I was reminded of an article by William Givens (Canine Chronicle 2013) in which he says, “Winners hate to lose, I do. But I’ve learned that if you compete at anything, especially dog shows, you are going to lose a good portion of the time. So, you had best learn how to handle it. Trust me, if you do not learn how to cope with a loss and put it behind you, it will haunt you to the point that you will not be able to win.”

I hear you, Mister Givens. I would just take my dog and walk him back to his crate. I just needed to “walk it off.” I wasn’t upset with the judges. As I said, it was apparent that they liked my dog, and gave him a chance to pull it together, but the ghosts kept jumping up in front of Trace.

As I shared this incident with some friends, I heard many of their “war stories” of getting a dog started. An international judge – and one-time top handler – told me of bringing an Airedale a great many miles to show at the iconic Terrier show – Montgomery. Expectations were very high for this amazing dog (who had never been shown outside), and she was showing superbly … until the first drop of rain fell on her head! She lost it. Can you imagine that disappointment?

As my friend said, “Dogs do these things to us, and … you know what? We take a deep breath, we shake ourselves (kind of the way a dog does, but mentally) and continue ahead. Because we have been told that winners don’t quit, because there’s always a new show and possible improvement, and because, frankly, we just LOVE this sport.”

And more importantly, we love our dogs and are proud of them.

So, maybe it wasn’t going to be that easy after all. I have had dogs that were easy – or maybe that is just what I remember. As I think back on some of our winning dogs, I realize how much work went into Streamer, Dawson and Gifford. There was a post on Facebook that I think is the truth. It said, “Titling a dog does not mean you are the best trainer or have the smartest dog. Titling a dog means you never gave up, it means you overcame disappointments, it means you didn’t give in to nitpickers, and you learned to realize and accept how little you actually know.”

A very dear friend of mine – and a professional handler – talking about top-winning dogs, says, “We see these dogs winning and forget – or never knew – how much time and training goes into these dogs. Very few dogs come out and ‘kick ass.’ Most of us only see when they do the ass-kicking – not the time and training (and heartache and tears) that went in before the dog started winning. It takes knowledge, patience and determination. Very often we need to ‘get in the dog’s head,’ before we succeed with the dog. We often forget how immature a specific dog may be – no matter the age. And our dog shows can be very overwhelming to a new dog.”

There have always been discussions about whether or not a judge should show – or have shown – their own dogs. I think this past weekend was another reminder for me of what exhibitors go through to put their dogs in front of me in the ring. Don’t you think that will keep me on my toes, and make me an even better judge?

Certainly, the weekend was not a complete failure. Trace came away with a major, and we now know what we need to work on to help give him the confidence he needs. It's not just about winning.  We got to spend time with great friends, and that is always welcomed. Shaun and Donna had great success with their English Setters. I got to assist Pat and Bob Robinson run an Irish Setter seminar for judges who want to apply to judge my breed. Thank you, Phyl Scalf and the Arizona Dog Judges, for the opportunity to provide education to new judges on 16 breeds. I sincerely thank all the breeders, owners and handlers who brought their dogs to be used for “hands-on” portion of the seminar. We actually had eight Irish Setters for the attendees to see. Great job. All in all, an enlightening and valuable weekend.

© Dog News. This article may not be reposted, reprinted, rewritten, excerpted or otherwise duplicated in any medium without the express written permission of the publisher.
Mon, 03/21/2022 - 3:08pm