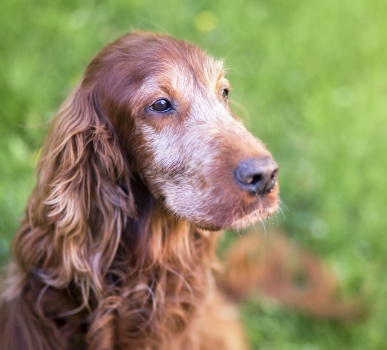 I (hopefully) plan on having my dog complete his championship very soon. Like everyone else thinks about their dog, I think he is a very good breed representative. A couple of judges – including a breeder-judge who I greatly respect - said of him, “He has too much breed type and quality to deny.” Unabashedly prejudiced, I agree, and so I was “mapping out” shows and judges for him after he is a champion.

My wife very honestly (she is always painfully honest) said, “Do you think you can show a special now?” Although the question hurt – reminding me of my age and health, and that I no longer am who I was – it was probably a very real question. So, exactly what is necessary to show a “special?” (By the way, all champions are not necessarily “special.”)

Many years ago, shortly after Shelly and I were married, we went to an Irish Setter specialty, and I had not been to one in a few years due to other commitments. Anyway, I was bragging to her as we entered the showgrounds – telling her how successful I used to be showing Irish Setters (showing off for my new wife). As luck would have it, here are the remarks we heard from the first three people I introduced Shelly to:

Wow, I knew you when you had hair.

We thought you were dead.

Didn’t you used to be Sid Marx?

Yup – I used to be him. After hearing that story, my dear friend Allen Odom used to introduce me to others by saying, “Go ahead … tell him who you used to be!”

Although I was not in the same class of those against whom I competed – Bob and Jane Forsyth, George Alston, Bill Trainor, Celeste Gavin, etc. – I held my own when showing Irish Setters. A lot of years have passed since then, and they have taken a toll. So, should this old body try to show a mature Irish Setter? Why?

Shortly after having triple bypass surgery, I showed my Irish (Trace) at the national specialty. My mind told me what I wanted to do as his handler, but my body said, “Are you kidding?” In spite of me, Trace showed his heart out and won RWD under a knowledgeable breeder-judge, but I certainly did not help him. And now I am thinking of showing him as a special?

Since that show, I have worked with Trace a little, and we are working well as a team, although my wife points out that setting him up once and moving him down and back in the backyard – all for a total of four to five minutes – is not the same as showing in a large class. Can’t I get the judges to come look at him in my backyard?

If I will be hurting Trace’s chances at winning, should I be showing him? Why not just hand him off to a handler? To be honest, Trace is not the kind of dog that will show for just anybody. He wants his “dad.”

I think there is a significant difference between “showing” a special and “campaigning” a dog. My judging schedule simply will not allow me to show him more than occasionally, and I have no desire to crisscross the country showing a dog. Where we live, there simply are not that many shows without long drives, and that is also not something we want at this point in our lives. Finally, I will be very selective about which judges I want to judge my dog. Like some others we have had, this dog will not look the same as most of the others in the ring – for many reasons – and so I will look for knowledgeable judges – with good hands – who will appreciate the dog. He certainly will not always win, but he should be looked at. Isn’t that why we pay the entry fee? And what if I am hurting my dog’s chances? Well, we all can only do what we can do, and I don’t think Trace will care as long as he knows I love him no matter what.

Whether I should show my dog or not really comes down to expectations. I must constantly remind myself to keep my expectations and goals realistic. I also need to understand who (I mean, which dog) I am showing against. It will be very difficult for this old body to navigate a very good dog against a top-winning dog that is handled perfectly. Those are the facts!

But if one of my goals is to enjoy showing my dog, that is another thing. Another reason is that I love my dog and have a sense of pride in him. Showing him when I am not away at a judging assignment also allows me to enjoy time with friends that I cannot do when I am judging. When Shelly and I were consistently showing dogs, we thoroughly enjoyed the time we got to spend with friends, the discussions while grooming dogs and the dinners we shared together. We have made great friends in our dog community, and showing my dog occasionally will give us the opportunity to do these things again.

This is certainly not a topic that has an easy answer. Some say that judges should not show their dogs. Hey, we were not born judges. As a friend said, “I always thought that it was cruel to force a person that has shown her dogs her whole life, who remained in this sport because she LOVED doing it, to force this person to quit because of using this new ‘judging’ hat.” Of course, there is a big difference between “showing” a dog in Best of Breed and “campaigning” a dog.

Like other judges, I have seen dogs – good dogs – being shown by those who love their dog, but simply could not move the dog. I know how difficult that is for a judge. We want to put up the best dog in the ring, but does the dog look like that? I know there are times I have put up a dog that was not shown well, and I am sure there were questions asked outside the ring (and sometimes, inside the ring), but I did what I thought was correct. Will all judges do that? I guess when I am convinced it is ME that is losing, I will have to reconsider getting someone else to show my dog – but he really does not like that. If that remains the same …? As my friend reminded me, as we get older, we may be improved in many respects, but not necessarily from a physical point.

Father Time is undefeated, and I may quickly see that I cannot show this dog properly. A major reason for me wanting to have this dog in the ring is that I believe judges should see him and what he represents – balance, substance, soundness and elegance in one package (as called for in our standard) without being overdone or over-angulated. Many times, judges say, “We can only put up what’s in front of us,” and that certainly is right, but maybe some of the newer judges have never seen a good representative of that breed to have as a picture in their mind’s eye. So maybe if there is a dog that has great breed type, those judges should get to see him.

Good dogs should be a part of judges’ education. I cannot take credit for Trace since I did not breed him. Maybe he will get others with similar dogs – who do not want to compete with the style of dog now being shown – to bring them out. When I judge, I try to show others what I think is right in the breed from those in front of me. Maybe I should do the same with a dog I show. As a breeder-judge told me, he will either win or take five out of five because he will not look like anything else in the ring. We are used to that!

And when Father Time taps me on the shoulder, and tells me to hand in my show lead, I may have to find a handler. A friend of mine showed my dog for me a few times, but even though he is a fantastic handler, the dog just didn’t seem happy. I may have to try a few people to see where there is a match. In the meantime, I – like many others – will just do the best I can.

So why am I going try to show my dog? Why do any of us? I think this quote from a mother talking about her young son showing his dog at their national specialty sums it up: “My biggest brag of the National weekend was my son. He didn’t win a single ribbon. He didn’t make the cut. He didn’t care — he just had fun. He wanted to show, he took directions well and tried his hardest. What he did win was everyone’s heart and respect. He was kind, polite and courteous to everyone all weekend. He congratulated people, held doors open, offered to get people chairs and even went on smoothie runs. He made friends and enjoyed hanging out with the other kids. The way he acted this weekend was worth more than any ribbon or win.” Great job, young man.

© Dog News. This article may not be reposted, reprinted, rewritten, excerpted or otherwise duplicated in any medium without the express written permission of the publisher.
Fri, 09/16/2022 - 11:09pm