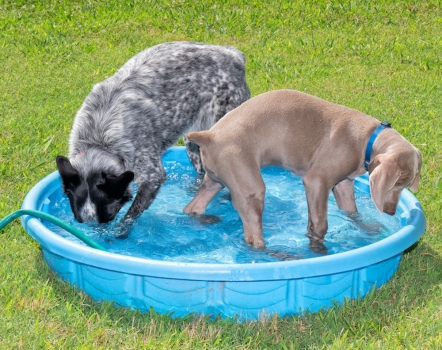 I probably should have written this earlier in the year, but I assumed common sense would prevail. Of course, then I realized – again - that common sense is definitely not so common.

There are two issues that continue to be a concern to me: protecting our dogs in the heat and crowding.

I think we all realize that there are various levels of “professional” handlers, ranging from someone who has a show lead and a little showing experience and ability to a handler who is consistently in the Group and Best in Show ring. But no matter the level of handling quality, all professional handlers have the huge responsibility to care for the dogs in their charge. The extreme heat wave that has covered the country in the past couple of months has added a sense of urgency to this responsibility.

Recently, a professional handler whom I respect had the courage to post an alert about another so-called “professional” who left dogs under her care under an open arena with just fans all day AND ALL NIGHT when the temperature was 100 degrees. She went on to say that if the person did not have the proper vehicle and equipment, she should not be handling dogs for others (especially in the South and Southwest). I couldn’t agree more. Further, in this particular situation there was an air-conditioned building nearby in which the dogs would have been safer. Would she have left the dogs outside all day and night in the winter when it was below freezing?

Consider if you will the difference between this supposed professional and those who recently pulled their dogs from shows in the Northwest because of the excessive heat. These handlers may have lost some income, but they showed their true integrity. Thank you.

I asked why the American Kennel Club representative was not notified, and was told that there was not one present at this show. I then asked why a bench committee was not called, and I was told this issue is not under the auspices of the committee. If a dog’s safety is not under the purview of a bench committee, why should there even be one? At the very least, couldn’t someone from the committee speak to the person involved, and then a letter be sent to AKC by the bench committee concerning this issue? Or do we have to wait until something terrible happens before we are allowed to take action?

There are things prospective clients should do to protect themselves and their dogs when choosing a professional. I would recommend doing the following:

Ask where your dog will be kept at the shows, during travel and at night.

Observe the two or three handlers you are considering at a few shows to see how they handle themselves (and the dogs), win or lose.

Watch the handler outside the ring as well as inside to see what kind of rapport she has with the dogs she shows.

Observe the handler’s set-up to see how dogs are kept, exercised and groomed. How often are they taken out of their crates? How clean is the X-pen and area? What kind of exercise do they get?

How clean are the tools used to clean the X-pens? Are there buckets of dirty water standing there?

Are dogs jumping up and down, barking incessantly because no one is paying any attention to them? Or do the handlers/assistants just scream at them?

How long are dogs left standing on grooming tables?

What are the handler's kennel facilities?

Ask to see the contract you will be asked to sign and make sure you understand what the fees are, including how expenses are calculated.

If possible, talk to existing clients of the handler

It is the owner’s responsibility to properly “vet” the professional under consideration. Just like any other occupation, there are good and bad handlers. An example of a poor handler has been described above. What is a good handler? Of course, success in the ring is a part of it, but for me it is more how they care for their dogs. I know of a handler who won the Group with a brand new special – and then she pulled her the next day to let her rest. This was a young bitch, and since she won the Group. she had been shown early in the morning and then Best in Show judging finished after 7 p.m. The handler felt it was better for this new bitch to rest and not be burned out quickly. She wanted her to continue to like showing. Of course, the handler informed the owner what she was doing. The dog's welfare was more important than any possible ribbon.

Basically, hiring a handler for the dog you love is starting a new relationship. There are handlers who have had the same clients for more than 15 years, and obviously this relationship is working. There are handlers who exhibit a lot of integrity by only accepting dogs of decent quality to show. There are also a lot of supposed "handlers" who will show anything for "gas money." It is important that you get an honest, unbiased opinion of your dog, and that your dog and the handler can form the proper bond to be successful. There is no denying that some dogs work better with some handlers and not others. A realistic trial period will help in this area.

But it is not just professional handlers who have to be aware about weather conditions. I have also seen owners who do not have the proper basic equipment – not even a crate so that their dog can rest safely. I have witnessed owners who stand ringside for hours (yes, literally) with their dog panting in the sun. They just seem oblivious to their dog’s safety. Many times, I have stopped my judging when I have noticed this and asked the person to at least get their dog into the shade. It is not rocket science. And, by the way, don’t say, “He is used to the heat!” A dog – or anyone – is used to the heat right up until they are not!

Now, will someone tell me what the fascination is that draws people to congregate ringside with their dog(s) for a long time before – and often after – judging? You would think that when shows are outside this would not be a problem, but that is not the case. There is a limited amount of shade available from tents that are put up over the ring, and everyone tries to utilize it. That is understandable, but all this crowding does is put dogs into unnecessary dangerous situations. Dogs are hot. Some are stressed. And all it could take is an accidental bumping of the wrong dog at the wrong time, and we have a problem. Certainly, find your shade, but it doesn’t all have to be in one spot.

When the rings are inside, the same situation exists with crowding – but for a different reason. Not all venues are blessed with unlimited indoor, air-conditioned space, so instead of shade causing the crowding, it is the limited distance between the rings and the walls. And, by the way, there are far too many people who do not hold their dog in close or under control. Common sense?

By the way, I understand everyone feels wonderful to be at shows where masks may not be required, but I don’t believe that everything is back to where it was before the pandemic never existed. Do you remember what social distancing means? Certainly, we are safer than when the pandemic was running rampant. Unfortunately, not everyone has chosen to be vaccinated. Yes, we all hope that life can return to what was normal, but let’s just slow down a little. There’s that common-sense thing again.

© Dog News. This article may not be reposted, reprinted, rewritten, excerpted or otherwise duplicated in any medium without the express written permission of the publisher.
Mon, 08/16/2021 - 10:07am