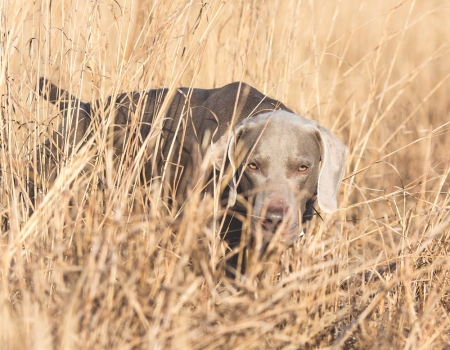 No one quite knows how the Weimaraner obtained its unusual color, but what's indisputable is its versatility
By
M.J. Nelson

Weimaraners are an unusual sporting breed. Not only does their hunting style, described as “stealthy” and “catlike,” differ from that of the other pointing breeds, but their color is unique as well.

For most Sporting breeds, coat color serves one of two purposes: It camouflages the dog’s presence from waterfowl or it makes the dog highly visible to the hunter. The Chesapeake Bay Retriever colors of deadgrass, sedge and brown would be prime examples of camouflaging colors, although the black of Labradors, Curly-Coats and Flat-Coats also blends quite well with the shadows in the marsh. The flashy orange and white version of Brittanys or the nearly all-white Pointers and the lemon and orange English Setters would be prime examples of colors designed to enable a hunter to keep better track of where the dog is. But grey? The only time the grey coat of a Weimaraner would serve as camouflage would be on a foggy or misty day when the atmosphere itself is grey. As for improved visibility, gray is a very neutral cover that, unlike white, doesn’t really stand out in almost any natural environment.

The question seems to be “From whence cometh the gray?” It’s not all that unusual in the Nordic breeds, some Sighthound breeds are gray, as are a few terriers. But none of these figured in the development of the breed during the 19th Century in Weimar, Germany. While some researchers seem to think that the Mastiff and some sort of continental pointing dog were used to create the Weimaraner, others believe the Bloodhound, Pointer, German Shorthaired Pointer, the blue Great Dane and the silver-gray Huehnerhund, also known as the “chicken dog,” were the breeds that went into the Weimaraner’s development. Still others think the Weimaraner’s color is simply a dilution of either brown or black and may possibly have been a mutation. So, there’s no definitive answer to the question of how Weimaraners came to be gray.

What is not in question, however, is the breed’s versatility. As is the case with most sporting breeds, the Weimaraner can be successful at just about anything they are asked to do besides their traditional jobs as hunting dogs. “Weimaraners are simply amazingly versatile competitors. They are extremely athletic with limitless energy. They love to fetch and swim and all have incredible natural tracking ability. As much as they love to hunt birds, they are quite willing to switch gears to work in close concert with you in obedience or agility. They readily sort out the different goals and requirements for each activity. A field and a harness means we’ll go tracking.  Gunfire in the distance and a stakeout means it’s time to hunt birds. Agility equipment or an obedience/rally collar means it’s time to do one of those activities. In her later years, Reese (DC PM Trax Day Tripper CD TDX OA OAJ) has been willing to give scent work, tricks and therapy work a try,” said Shirley Nilsson who owns the dog with Judy Owen. 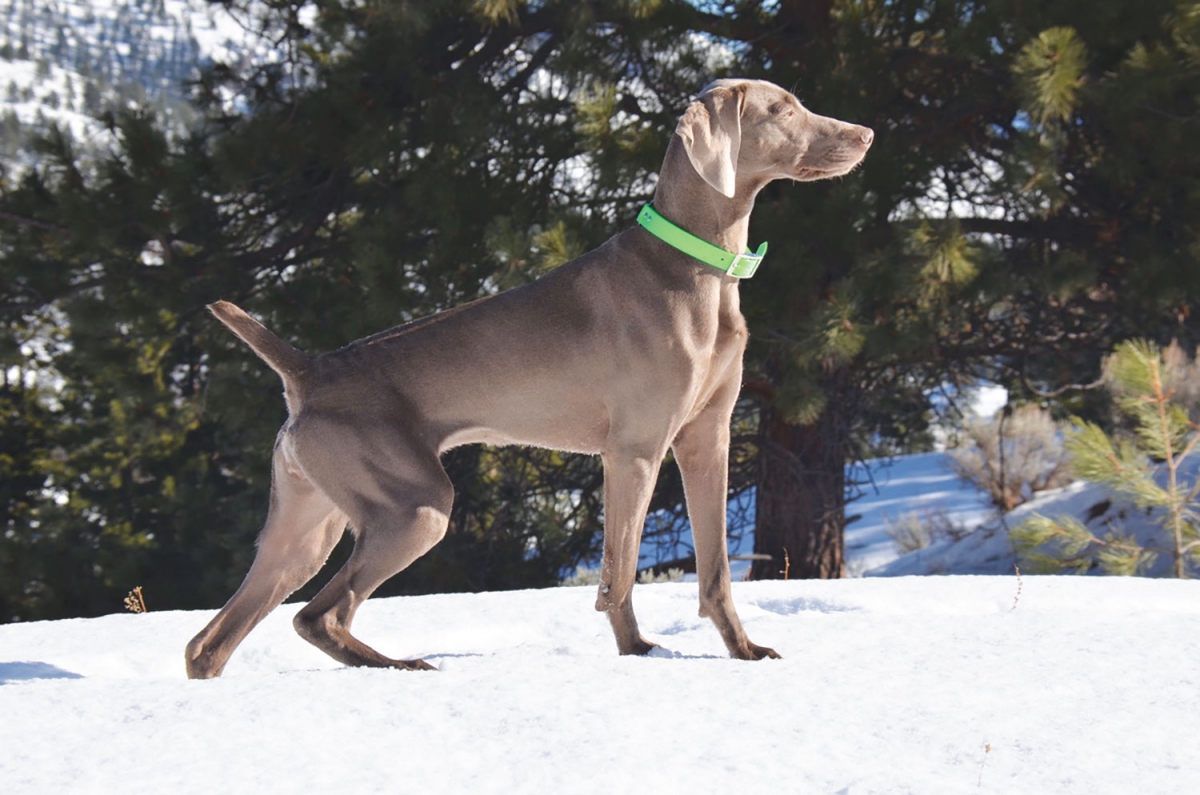 On a snowy field, Reese gets a nose full of bird scent.

“Weimaraners love being with people. By having fun and making training fun for them, they can be very successful in a variety of sports. Because they were bred as a versatile hunting dog, they have a variety of drives that can really be used to help them be successful in whatever sport you choose. They have excelled in agility, tracking and obedience as well as in the field.  Depending upon what you like to do and some of the natural predispositions of the dog they really can excel at just about anything. One area, outside their traditional field work, where they really do well is tracking because they have such good noses. Quite a few Weimaraners have become champion trackers,” said Gretchen Stephenson whose dog Tani (Ch Tayla N Firemark’s Say With Me Titania VCDC1 CDX MH JHR RN CGCA CGCU TKP SDX RDXa VX4 NAVHDA NA Prize 1 NAVHDA UT Prize 1) is co-owned by her breeder, Janet Boggs.

“Weimaraners are wonderful candidates for participation in a variety of dog sports,” said Janet Valentovich who owns Ocean (Trax SeaHabilitation BN CD RE NA NAJ DD TKA NSD CGCA). “They have great noses, style, grace, athleticism and stamina. They also have a strong bond with their owners. It has been an enjoyable experience for me finding all the things a Weimaraner can do and since Ocean is just a year old, I’m eager to see what else we can do together.” 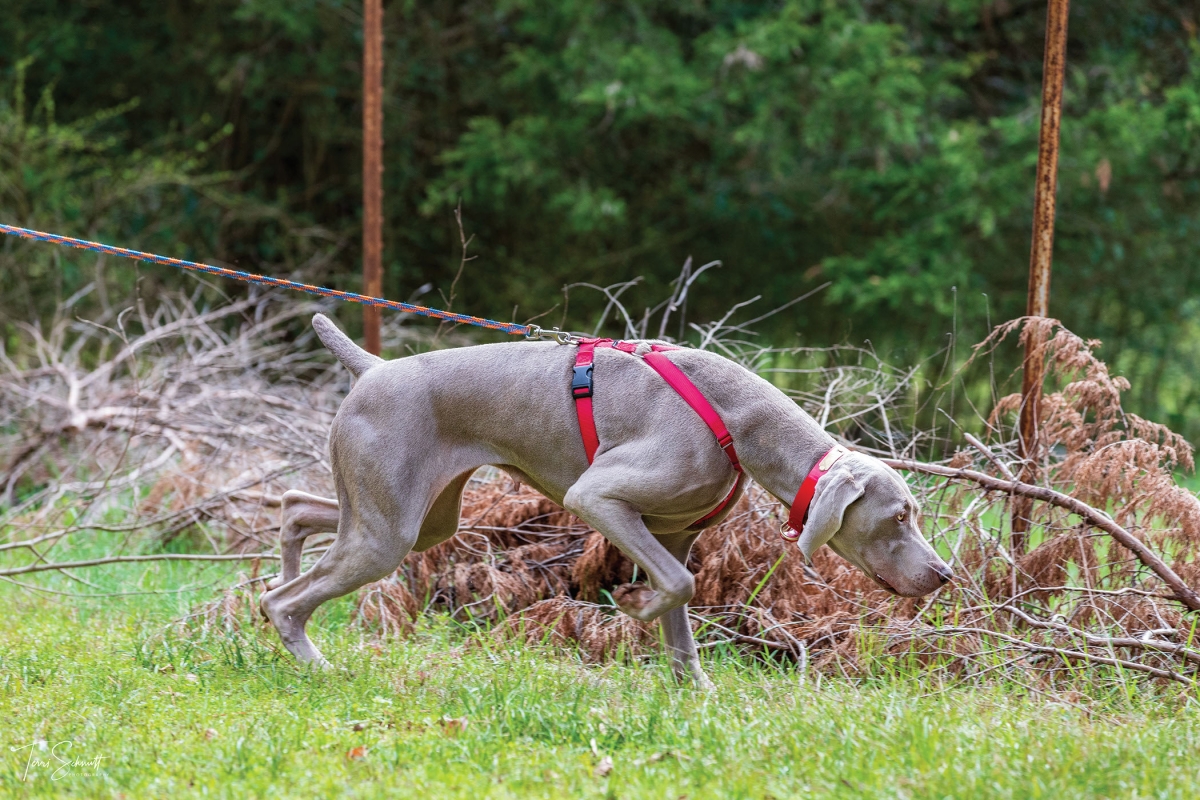 A sport at which Weimaraners excel, in addition to their traditional job as hunting dogs, is tracking as Tani demonstrates.

While the breed is very capable, it doesn’t mean that the progress to every title in every sport is a smooth progression. “In sports like obedience, you have to keep things interesting. Weims need to understand the ‘why’ of what you want them to do. They also need to know what’s in it for them. If you try to drill them, they will figure that they haven’t done it correctly the first couple of times you asked and they will try something different. My dogs don’t seem to have any difficulty throwing themselves into whatever sport we’re doing although I don’t rush them and sometimes we drop back to skills they’ve already mastered and build on those. Also, sometimes I push their training beyond what we’ll have to do in competition. All of these things keep the work interesting for them. One issue I have seen is a lot of prejudice against Weims in the field although this has shown some improvement over the years as Weims have gotten better in the field. I was told by one field trial judge that he would never put a Weim up no matter what. We were able to change his mind and although we never won under him, we did get as high as second place when he was judging. I had another judge tell me that when Weims came to the line in years past, she and many of her fellow judges would cringe because they knew the dog was going to hunt like crap and there would also likely be a dog fight. Again, this is no longer much of an issue as the breed has gotten better in the field both in ability and in temperament.  Each sport has its own challenges. For example, I live in Florida and hunt tests, field trials and tracking are more difficult to do because of the heat, lack of grounds, snakes and alligators,” said Susan Wallace who owns Yetta (GCh Silberkinder Yetanother Distraxion CD BN RE SH CA BCAT CGC NRD VX BROM DJ TT TDI) and Chula (BIS BISS [NOHS] GCh Silberkinder Shake It Off RN JH BCAT DS NRD NSD V DS NA1). 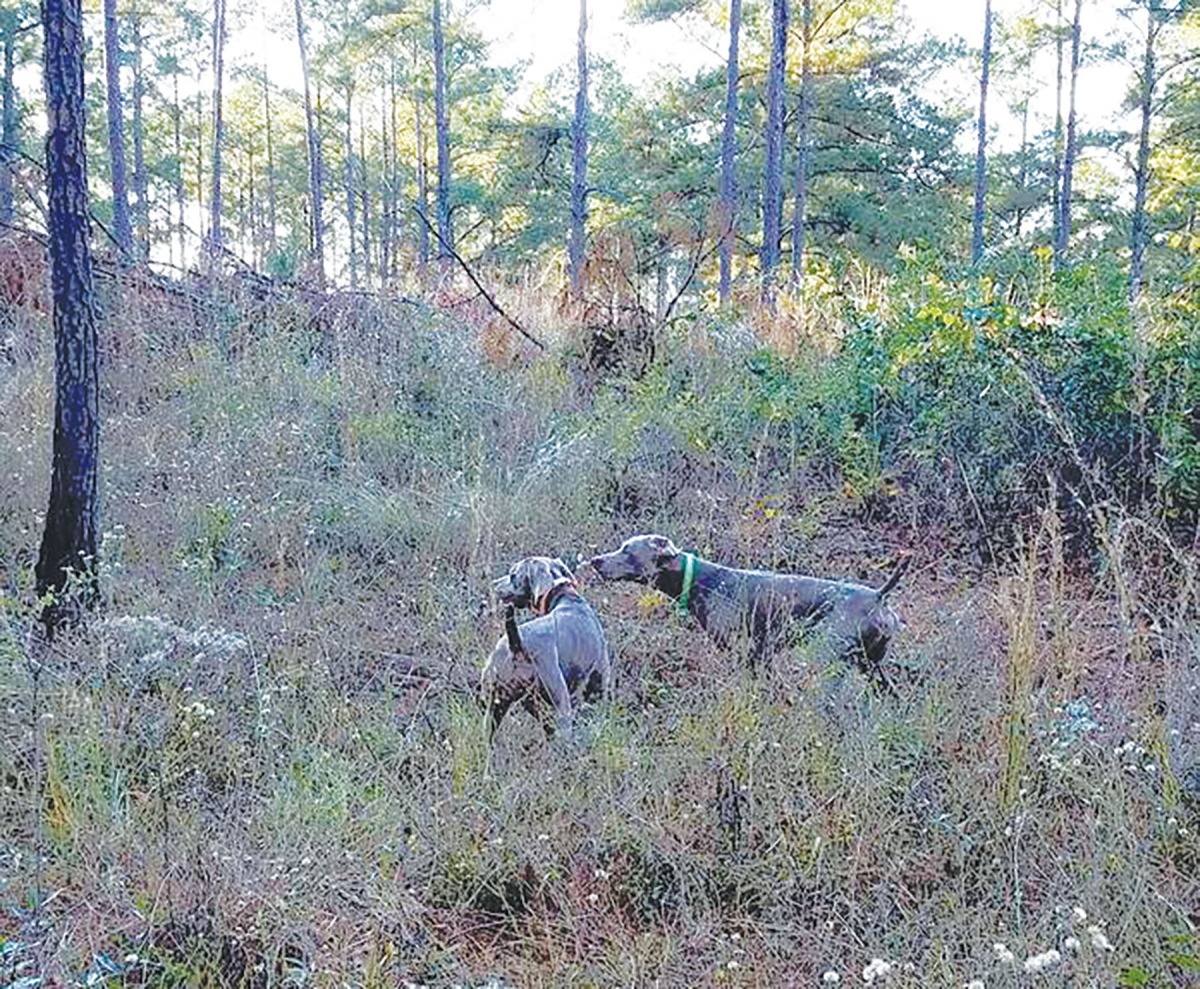 A point and a back demonstrate that while Yetta and Chula are happy doing other sports, they’ve not forgotten what they were meant to do.

A key to success with a Weimaraner, according to Stephenson, is keeping the training sessions short. “I keep my training sessions short regardless of where we are in the teaching or competition phases with a sport. I may train for five minutes on one little piece of a skill that a dog needs for a sport then change and train for another five minutes on something totally different. Since I train my dogs in several different sports, when they get bored with something, I can stop doing that for awhile and switch to a sport we haven’t been training for awhile. Hunting and tracking are easier to do in the cooler months so I train those during the cool months and then switch to obedience and agility in the warmer months. With my first Weimaraners, I had trouble remembering the course in agility and where I needed to give the dog the right cue.   Also, with these first dogs in obedience, I had to learn how to better motivate the dogs. As a result, my more recent Weimaraners have enjoyed and gotten better at playing the obedience game.” 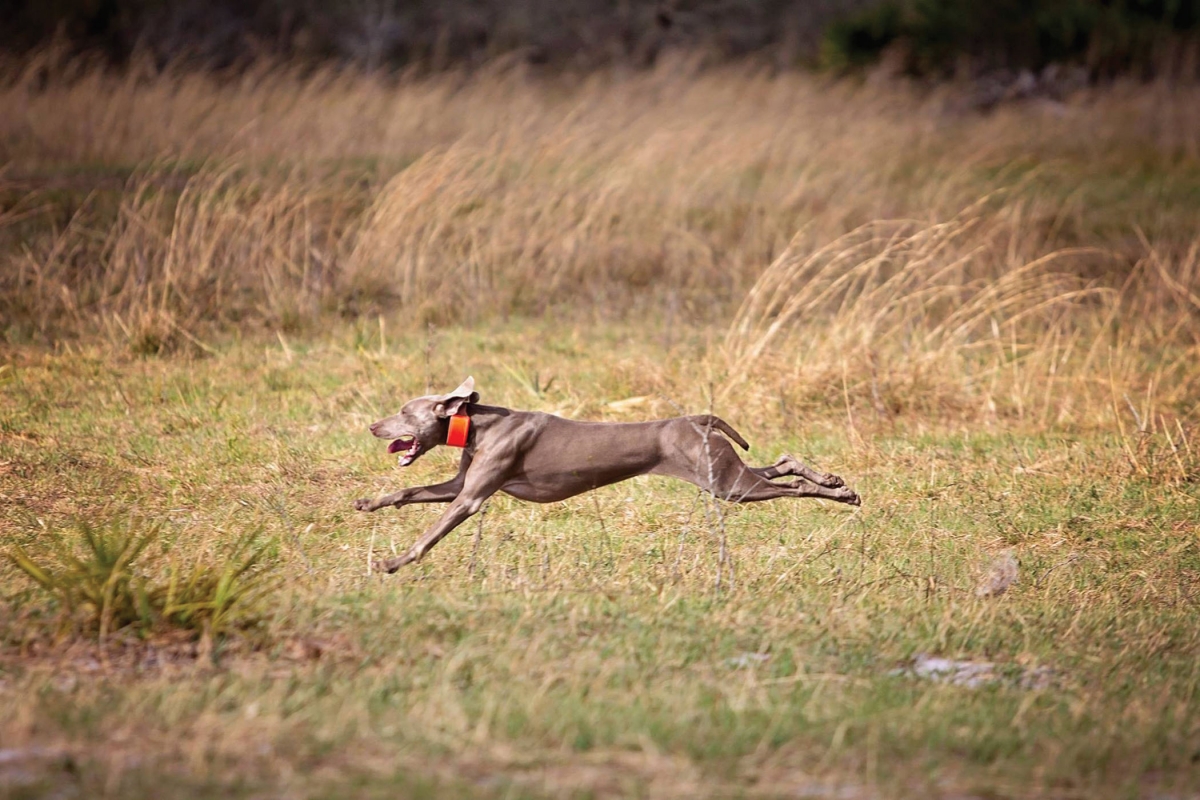 Chula does her best imitation of a Greyhound in the field.

“I have often practiced multiple sports in a single session,” said Nilsson. “For example, after setting a track and waiting for it to age, I’ve frequently done some bird work or retrieving training in an adjacent pond or field. We used Reese’s excitement at doing field work to practice some obedience work. She had to heel or do a recall before she was released to hunt. With Reese, there is no doubt that field work is her favorite followed closely by tracking.” 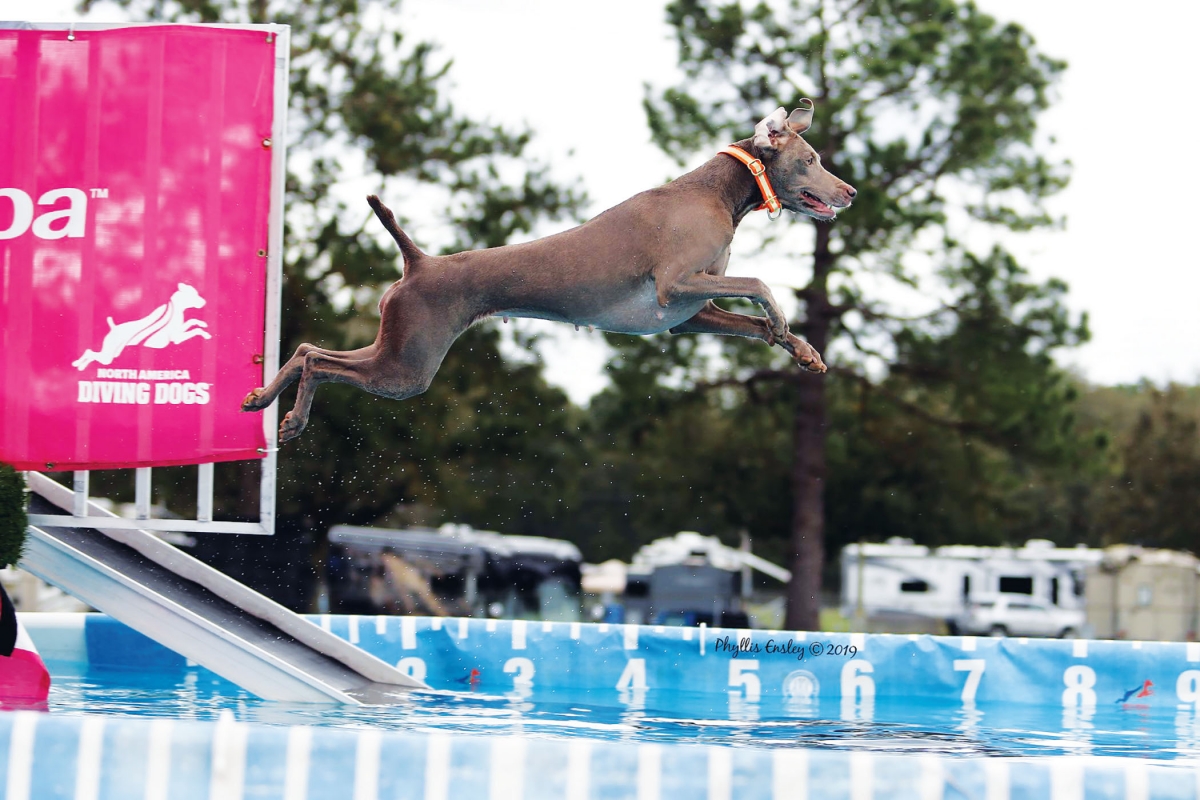 “My biggest problem these days is finding grounds to train on,” Wallace said. “I live in an area that is becoming increasingly urban. Many of the areas we used to use for tracking as well as field training are now subdivisions. It’s also often difficult to find people to train with who have dogs that are steady to wing and shot which is pretty much a necessity for obtaining the higher field titles, especially a master hunter. We have to travel farther to train and to compete in field events. We don’t have a local Weim club that is involved in the field or performance sports so we have had to make contacts with other pointing breed clubs and train and compete with them. In agility, I have to find a place that has a lot of floor spaces and very good padding or footing.  Those are not always easy to come by. But as long as the dogs are having fun doing something, we persevere. A few years ago, one of my dogs had an agility run where she did okay and earned a qualifying score but it was not exactly a pretty performance. Still, she came off the course with a big smile and you could just see in her eyes that she was thinking ‘I was AWESOME.’ I want my dogs to have that feeling whatever we do and whether they were awesome or awful.”

© Dog News. This article may not be reposted, reprinted, rewritten, excerpted or otherwise duplicated in any medium without the express written permission of the publisher.
Wed, 09/30/2020 - 8:59am