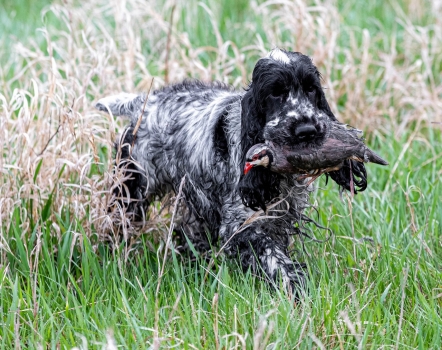 "Peter" (Havenhills Fooled Around and Fell in Love), one of Ann Cantrell’s English Cockers, is a COVID pup who is just beginning his career in dog sports but has two orange ribbons from Junior Hunt tests and a major win in the show ring.

Up close and personal with the English Cocker Spaniel
By
M.J. Nelson

The English Cocker Spaniel in the United States may owe its existence to a “preservation effort.”

In the 1920s, show-ring styles began to favor a different type of Cocker Spaniel than had originally been imported from England. The type that was developing in America was beginning to be more of a companion/pet dog than a hunting dog with little, if any, attention paid to the dog’s field ability by those making breeding decisions.

Understandably, breeders of the English type became alarmed at what was happening to their breed. A number of them were determined to preserve the Cocker Spaniel as they knew it. However, by the time the English-type Cocker Spaniel advocates became fully aware of what was occurring, the American Cocker Spaniel type was firmly established, and there was no going back.

The English Cocker of today is a merry little dog that is also a serious gun dog. But, like most of the Sporting breeds, the EC is successful in many dog sports besides its work in the field.

“English Cockers are athletic, energetic and their muscular, stocky physique is perfect for many dog sports. Their biddability and desire to please makes them a great partner,” says fancier Ann Cantrell. “They are smart and relatively easy to train, which is good, because they are a breed that does best if they have a job. They easily switch from one sport to another, even performing in two or more activities in a single day. They’re also an outstanding family dog, and they love being a ‘couch potato.’”

All that said, however, there is no disputing that their favorite activity is hunting, and Cantrell’s dogs are a case in point: Amy (GCh Havenhills Amy Curtis March CD BN RE JH SWA DJ CGC TKN WDX) has two qualifying scores in Senior Hunt tests, and her son, Peter (Havenhills Fooled Around and Fell in Love,) who as a Covid pup is just beginning his career in dog sports but has two orange ribbons from Junior Hunt tests and a major win in the show ring. 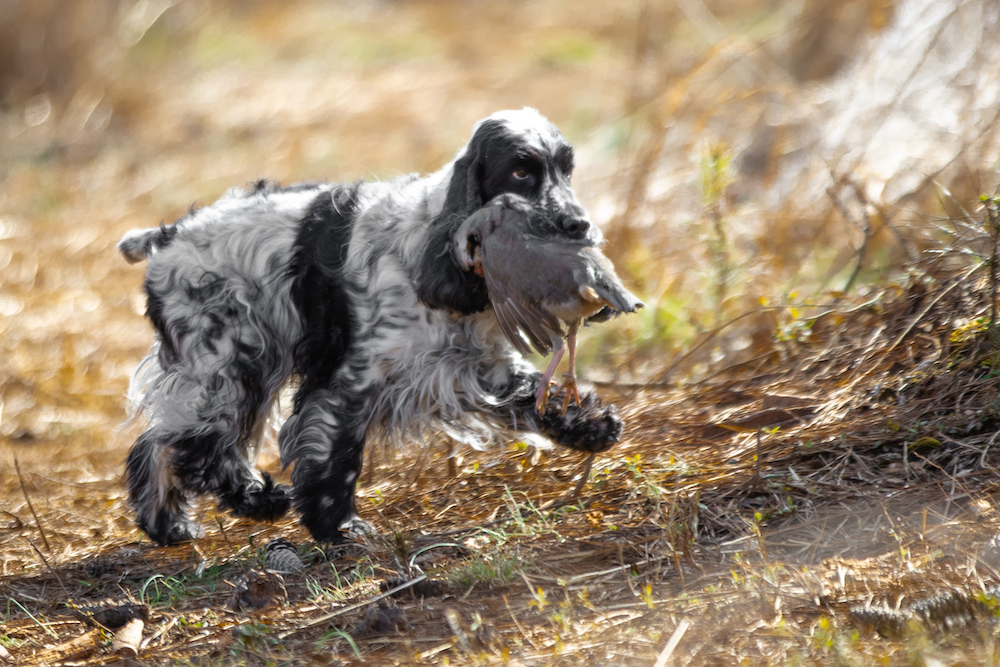 “I guess the toughest sport for me was hunt training, not because it was difficult for the dog but because I live in the southeastern part of the country and there aren’t many people in this area who know how to properly train a flushing spaniel,” says Jones, who co-owns Sophie Grace with Anita Berkey. 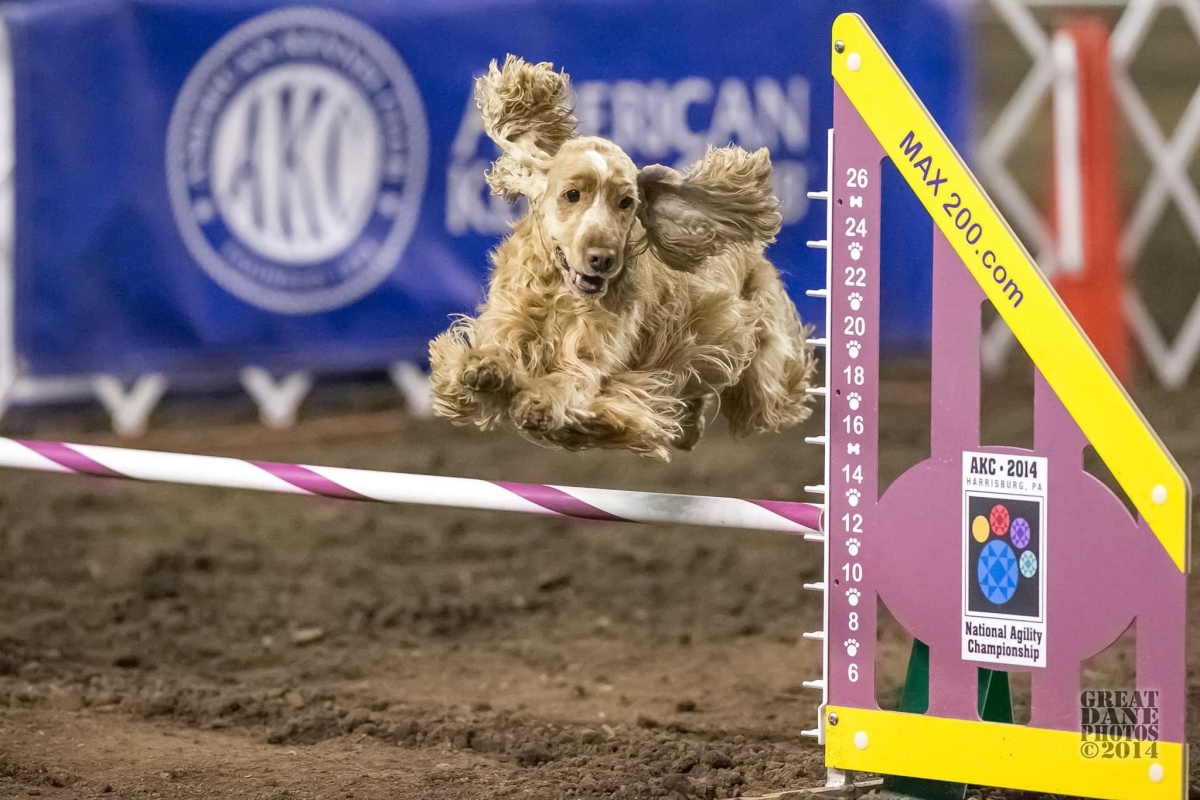 The predominant hunting dogs near Jones are retrievers. While there are also a number of Boykin Spaniels in the area, Jones says most of them are trained the same way as retrievers. Lamentably, local trainers who know how to properly train a flushing spaniel are few and far between.

“Luckily, Sophie Grace had strong hunting instincts, so she was able to get her Junior Hunter title fairly easily without much training and a handler who knew nothing about training a flushing spaniel,” explains Jones, who has since found an excellent trainer who understands the nuances of training a spaniel. The only drawback is that he’s a seven-hour drive away.

“The other big obstacle to our success has been me,” she continues. “I’ve had English Cockers for many years as pets, but Sophie Grace is my first show, performance and hunting dog. We’ve had to learn everything together, every step of the way.” 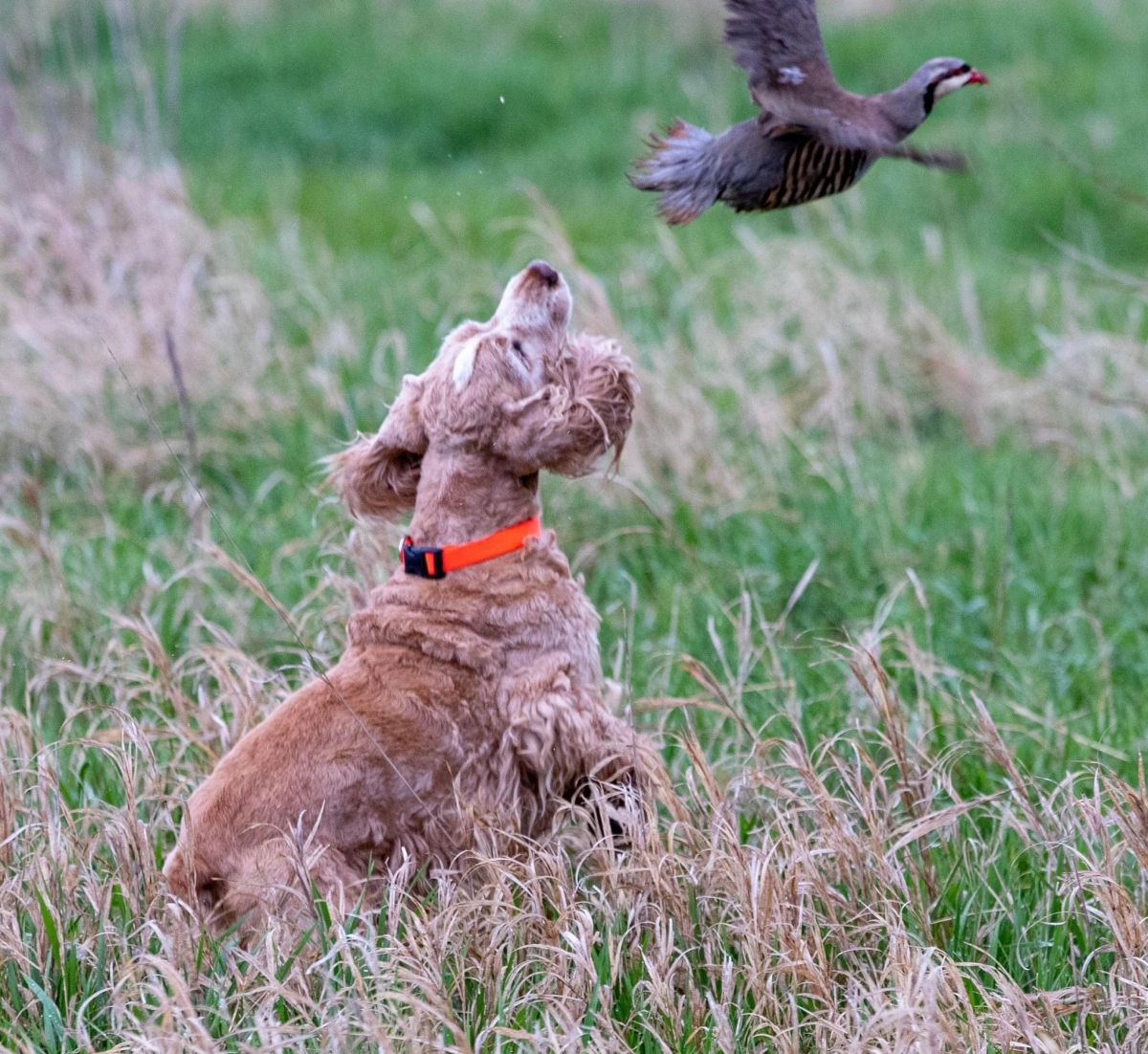 Sophie Grace got her Junior Hunter title despite having a handler who knew almost nothing about how to train a flushing spaniel.

Linda Green had a three-Labrador pack when the first English Cocker entered her household. “I had a pretty small place with a pretty small yard and didn’t think I could fit another Labrador in the mix,” she recalls. “A lot of my friends had ECs, and they kept getting another each time they’d lose one, so I figured there must be something about them that made people keep getting them.”

After her first one, Green was sold on the breed. “For one thing, it was easier to fit a 200 crate in the car than a 400,” she says. “I could also easily pick them up, and while they still took up most of the bed, they were a little easier to shift than the Labs had been. What’s more, they made me laugh, and as long as they get enough exercise, they are fine with a nap or watching TV just so they get to do whatever their people are doing. However, they much prefer to be heading to training or to some dog event.” 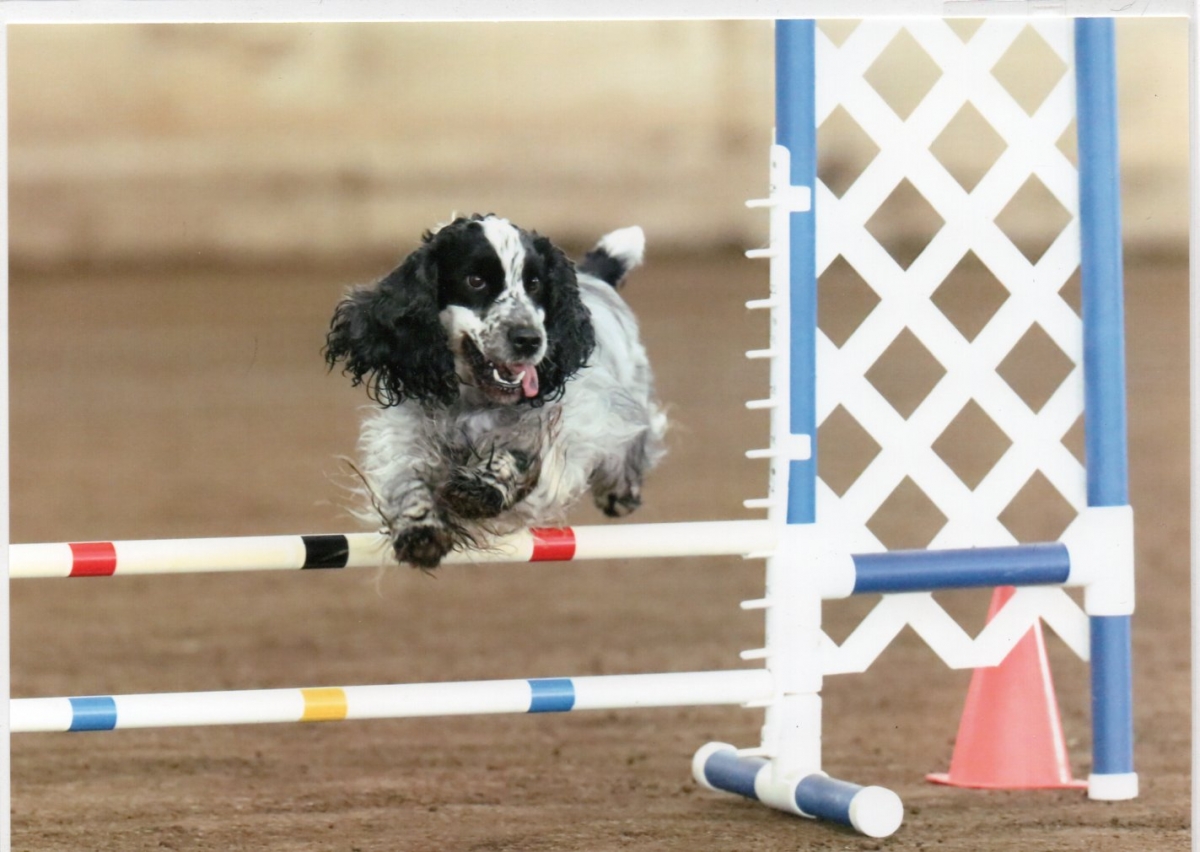 "Cassie" (PACH Ch Sunbreak Solitaire AX AXJ MXP2 MXPB MJP2 XF SWN), one of Linda Green’s English Cockers, will go out and sit by the weave poles if she thinks they haven’t been training enough. She will stamp her feet and stare at the house until Green comes out to play.

Such is their work ethic that one of Green’s girls, Cassie (PACH Ch Sunbreak Solitaire AX AXJ MXP2 MXPB MJP2 XF SWN), will sit by the weave poles if she thinks they haven’t been training enough.

“She will stamp her feet and stare at the house until I come out and play. I’ve found they are quite food motivated, which helps a lot in training,” says Green, who also owns Allie (Ch Sunbreak Time Flies OJ AX OF DJ WDX) and Sumo (Sunbreak Here and Now OA NAJ OF SWA). 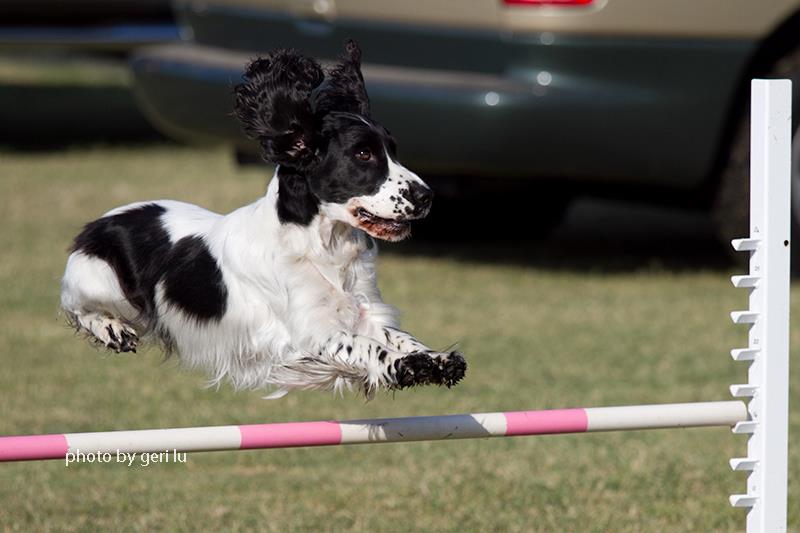 Allie (Ch Sunbreak Time Flies OJ AX OF DJ WDX), one of Green’s ECs, has been successful in the show ring, agility, dock jumping and the field.

The breed’s intelligence has sometimes proven to be an obstacle in training for some dog sports, Cantrell says.

“English Cockers are smart dogs, quite biddable but they are also ‘thinking dogs,’” she explains. “There are times when they want to take the lead and do something their way. But the biggest problem in my relationship with the dogs has been that the slow learner has been me. My inept training ability and inconsistent training time have been our greatest obstacle – that, and finding a trainer for hunt tests.”

That was a serious issue for Cantrell until, luckily, a trainer built a hunting preserve within decent driving distance of her home.

“I know there are many owners who would like to get their English Cockers involved in hunting but there are limited opportunities available for them, especially when it comes to finding a good spaniel field trainer,” she says. “All the things I have done with my dogs, however, have proven to be very beneficial. It has made them well adjusted to different situations, environments and people. Dog sports also keep them fit, in good weight and prevent the boredom that can lead to negative behavior.” 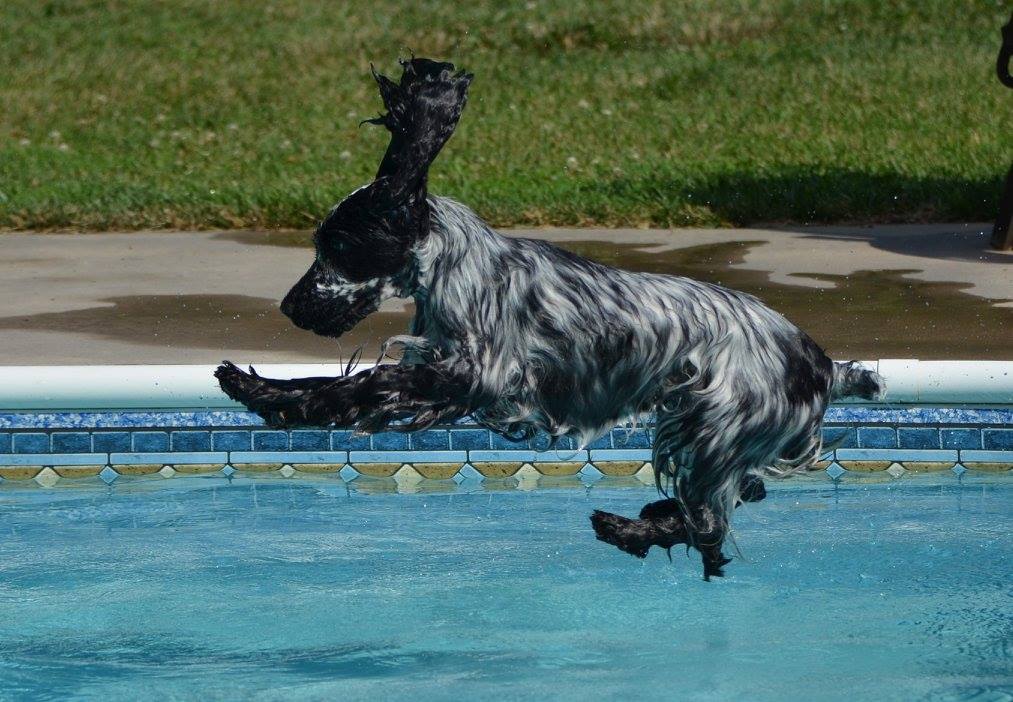 Dock diving might be Amy’s second favorite activity, if her enthusiasm for the sport is any indication.

For Green, learning to not overdo training has been important.

“An EC gets something quickly and then doesn’t see why they should have to keep doing that same thing over and over,” she says. “When I started agility, that was a problem with some trainers who had Border Collies or other herding breeds that didn’t seem to mind repetition. I had a boy who was having weave issues, and I overdid it. He got so when he saw the weave poles, he wanted nothing to do with them. I used food, but I think my frustration must have come through, because he just turned off all agility. So, we found other things to do, and I didn’t make that mistake again.”

Green notes that her dogs can also get obsessive over things like – horrors! – tennis balls.

“I took Sumo to train at a horse arena where they also do flyball, and he found out that there were often tennis balls tucked away around the arena,” she remembers. “He began looking for them and carried that obsession over to clods of dirt at trials. We had to back off and start over.” 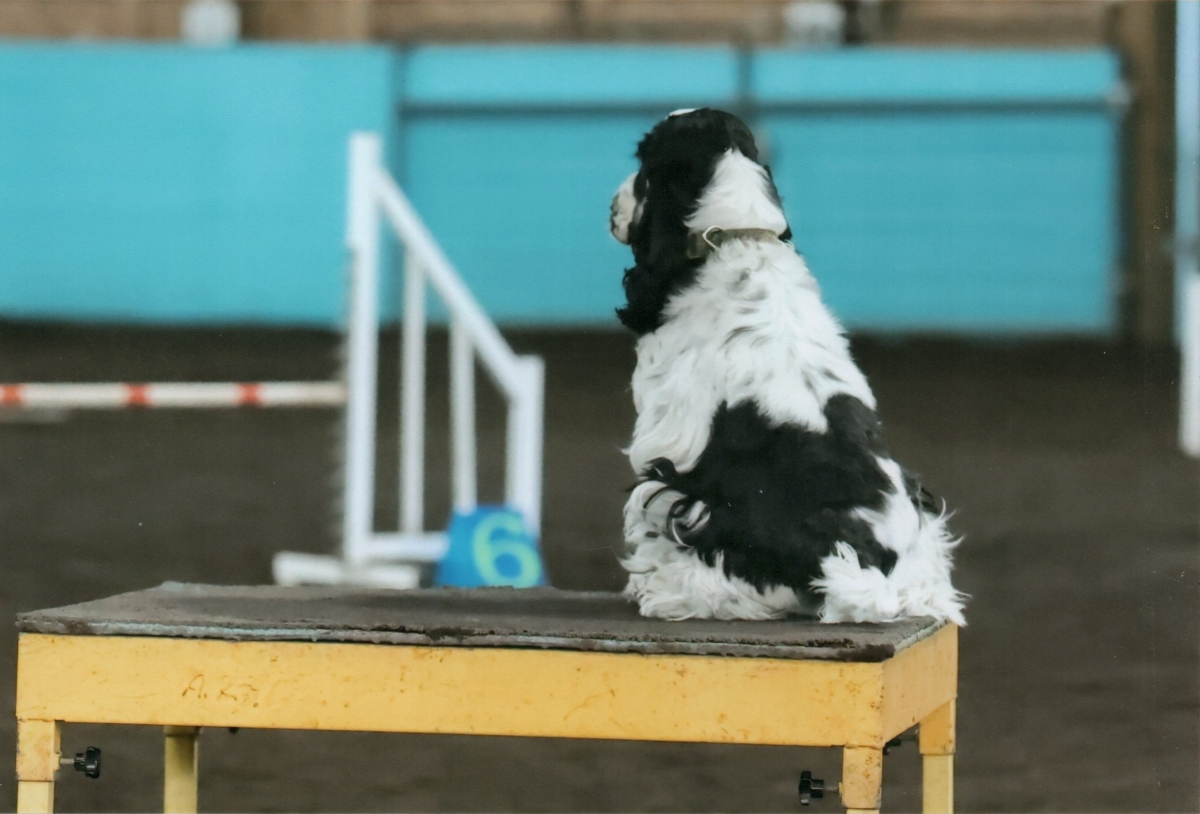 Sumo (Sunbreak Here and Now OA NAJ OF SWA,) another of Green’s English Cockers, became obsessed with tennis balls to the point where it was affecting his training in agility. 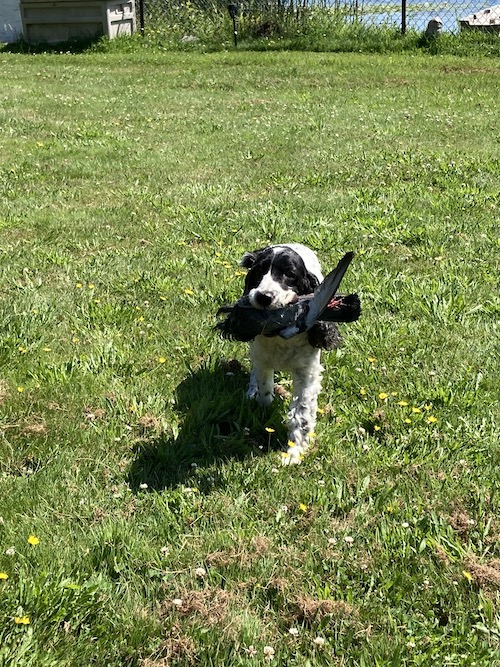 While Allie has been successful in a number of dog sports, it is not difficult to see that doing her “real work” makes her very happy.

Green also learned that it’s better to do several things at a time so the dogs don’t get bored. Sumo, for instance, does scent work and agility, and Green has just started fieldwork with him. “English Cockers are a smart and active breed, and I think they do best when they get to use their brains and their bodies,” she says. “For me, agility has replaced going to the gym, and it is what has made me work very hard to recover from a chronic illness and injury.”

Jones and her dog have received similar benefits from dog sports. “I think Sophie Grace has made a lot of friends for the breed as we’ve traveled from event to event, and that’s important for all purebred dog breeds,” she says. “For me, learning how to train a dog for the different sports and then competing in those sports has kept me active both mentally and physically.”

Green agrees that dog sports have taught her a lot about appreciating her dogs and honoring her relationship with them.

“In agility we often talk about ‘zone runs’ – that perfect run when you and your dog are so in sync you barely have to think about what you or they are doing,” she says. “To me, that is a reflection of the depth of the relationship you can build with your dogs when training and competing with them in the various dog sports.”

© Dog News. This article may not be reposted, reprinted, rewritten, excerpted or otherwise duplicated in any medium without the express written permission of the publisher.
Mon, 09/06/2021 - 9:48pm