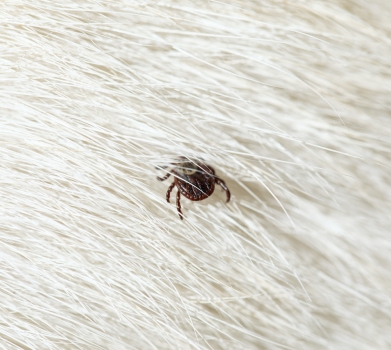 Watch out for the 2021 tick explosion

This year has seen an explosion of ticks throughout the country, especially in the Northeast. There, the deer tick that is associated with Lyme disease is joined by another dreaded insect: the flea.

It has been established that it’s not this year’s weather that has caused the increase in the tick population. When there is a bumper year of acorns, the rodent population swells in the following years, and that creates a lot of movement among the ticks on shrubs and tall grass that lie in wait for the opportunity to attach themselves to any passerby. For us and our dogs, the risk of getting bitten by a tick is greater as we attend outdoor shows during the summer. There are sprays that are poisonous to the insects that we can use on our clothing. That is help for us, but unless your dogs are on some protective medicine regime, they are very susceptible. Be vigilant about checking yourself after a long day at the dog show and especially your dogs. They are susceptible to the same tickborne illnesses as humans.

As we take these insect precautions, let’s not forget the coming heatwaves that are also nationwide. I know it’s like beating a dead horse (with apologies to Richard Souza, who uses that title for his Dog News column), but make sure the dogs in your trucks and vans are monitored and checked regularly and that water is plentiful. Of course, as always drive carefully and stop when you are tired.

Meet the Breeds is our version of the English Kennel Club’s original Discover Dogs event. Ours was copied from our English counterpart with several twists, such as including cats. It has had several reincarnations, starting as a stand-alone event at the Javits Center in New York City with some major sponsorship. It then attached itself to the AKC National Championship dog shows, then to the Westminster Kennel Club.

Now teaming up with GF Sports and Entertainment, Meet the Breeds is on the road. The first two cities announced in this multi-city tour are San Diego and Dallas, then on to Tampa, Philadelphia, Chicago, Columbus and New Orleans. The logistics of getting all our registered breeds represented in different cities across the nation will be Herculean. But it is in our best interest to keep our purebred dogs in the public’s eye. Any and all activities to combat the animal-rights people should be our main focus.

Good news for owners of breeds like Bulldogs, Bullmastiffs, Bull Terriers, Pit Bulls, Rottweilers, Doberman Pinschers and German Shepherds: There is new legislation that has been passed in New York and that now awaits the governor’s signature to be made into law. It will prohibit insurance companies from refusing to issue or renew, or to cancel or charge higher premiums for certain policies based solely on the breed of dog owned by the policyholder.

© Dog News. This article may not be reposted, reprinted, rewritten, excerpted or otherwise duplicated in any medium without the express written permission of the publisher.
Fri, 06/25/2021 - 12:30am