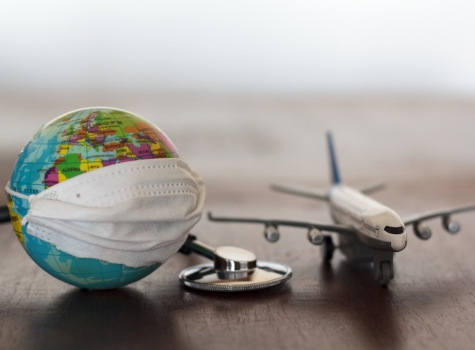 Some judges are taking to the mostly empty skies, with varying degrees of trepidation
By
Denise Flaim

If what most panel-wrangling show chairs say is true, there isn’t just a shortage of dog shows: There’s also a dwindling number of individuals willing to judge them.

Arguably, the most daunting prospect of heading out of town to judge a dog show is the prospect of air travel. Being trapped in an aluminum cylinder with a group of strangers of unknown epidemiological status – and no opportunity for escape – is not exactly reassuring.

But some judges have taken the plunge, if you’ll pardon the asymmetrical metaphor. And many have found that their worst fears were pretty much unfounded.

Long before she flew to Iowa last month for her first post-COVID assignment, Vicki Seiler-Cushman of Xenia, Ohio, worried that a mask alone might not provide enough protection on an airplane. So she invested in an Under the Weather ShieldPod (www.utdpods.com) – a super-lightweight clear-plastic tent that covers your entire upper body and has holes on the sides for your arms. 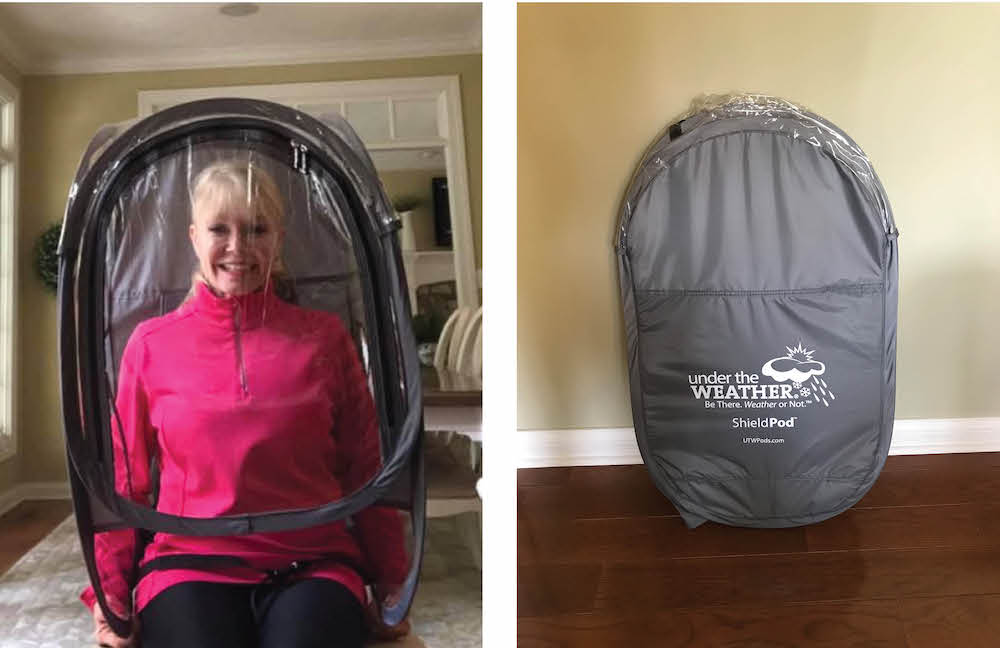 Above left: Vicki Seiler-Cushman models her own personal biosphere for plane travel. Above right: The ShieldPop in its carrying case.

“I saw it on television, and I ordered one for $100,” says Vicki, who posted a photo of herself modeling her personal bubble on Facebook, garnering more than 300 likes, and not a few affectionate ribbings. (“Packaged like the Barbie doll that you are!” chuckled Doug Johnson.)

“I don’t care what people think,” Vicki says good-naturedly, adding that she sent the photo to a friend’s daughter who is a flight attendant. “She said, ‘I wish everyone would wear one. I’d feel much safer.’”

But when Vicki boarded that flight to Iowa in late August, she went pod-less. Weighing the possibility of a full flight against the inconvenience of schlepping the awkwardly sized collapsed pod through the airport, she decided to share the same atmospheric conditions as her fellow passengers.

And she wasn’t sorry.

“There was hardly anyone in the airport, and I got through it very quickly,” Vicki says. “Once I got on the plane, there was no one beside my seat, and nobody behind or in front of me, either.”

Jay Richardson of Elgin, Illinois, judged in Topeka, Kansas, in mid-August. It was the first time he set foot in a ring after judging the Working Group at Westminster this February. And he, too, found surprisingly few passengers and plenty of safety precautions, such as mandatory masking during the flight.

Chicago O’Hare International Airport, which is usually teeming, was echoingly empty. “There wasn’t anyone in the waiting area,” Jay remembers. “And there were plenty of empty seats on the plane.”

Even in a more crowded carrier, Jay likely wouldn’t have been all that concerned.

“I think that there’s only so much you can do,” he says. “I’m not overly paranoid about it. I think some of it is out of your control. And, really, is it any different than going to the store?”

In some respects, not much different. On the flight home, Jay read a news story about a study of COVID-19 transmission on an international flight in early March, before safety precautions were put in place for air travel. The results were surprisingly optimistic.

German researchers analyzed the health outcomes of passengers on a flight from Tel Aviv, Israel, to Frankfurt, Germany. Of the 102 people aboard the four-hour-40-minute-long flight, 24 were part of a tour group that had been in contact with a hotel manager who was later diagnosed with COVID-19. Seven members of that tour group tested positive, but only two passengers who were not part of the group contracted the disease. Both were sitting within two rows of the infected tour-goers.

While two infections is two too many, it is a surprisingly low number, especially when you consider that behavior on the flight was pre-COVID business as usual – no social distancing, no masks, no nothing.

Even before enhanced filtering systems were put in place on most airlines, “the air-exchange rate on planes was pretty high, compared to your house or an apartments building,” Jay notes. The air on a commercial plane is fully exchanged every three to five minutes. And the fact that a “super-spreader” event has yet to be traced back to a flight suggests that air-circulation patterns on a plane are not particularly COVID-friendly.

About a month ago, Arnold Barnett, a professor of management science at the Massachusetts Institute of Technology, calculated all the risk factors in taking a plane ride and concluded that the chance of contracting COVID-19 on a full-capacity flight of two hours is one in 4,300. If the middle seats are kept empty, that risk is cut almost in half, to one in 7,700. As for the risk of dying of a case contracted while flying, Barnett calculated that to be between one in 400,000 and one in 600,000, depending on a passenger’s age and other risk factors.

The longer we travel by plane in this “new normal,” the better we will get at picking up little tricks to minimize risk even further: Select an airline that mandates mask usage and keeps middle seats open. Request a window seat, so you are exposed to fewer people. Be among the last to board the plane, so you spend less time inside with the ventilation system shut off, as it typically is when boarding. Turn on and blast the overhead air vent above you. And don’t purchase masks with valves, as airlines will not permit their use on planes.

Even before the term COVID-19 entered our vocabulary, Pam Lambie of Phoenix, Arizona, was taking precautions on airplanes.

“Before all this started, I would always take Lysol wipes in a Ziploc bag and clean the tray, arm rest, seat, head rest and belt buckle,” she explains.

For a Milwaukee-area assignment in early August, Pam also flew out of an unnaturally quiet airport. While her Southwest flight departing from Phoenix was rather full, “the middle seats on both sides of the aisle were empty.”

Masks were required for the duration of the flight, unless a passenger was eating, and flight attendants offered only one round of poured water and a small packet of snacks.

The most uncomfortable thing, she admits, was wearing a mask.

As for Vicki, she’s still contemplating using her ShieldPod on flights to judging assignments in COVID hot spots, or when changing planes is unavoidable. In the meantime, she’ll rely on double-masking: A medical-grade N95 mask – which are now relatively available on Amazon.com, along with their next-best cousins, KN95s – covered with a “pretty” cloth mask.

“Safe and attractive,” Vicki says with finality. “I went for both.”

We would expect nothing less.

© Dog News. This article may not be reposted, reprinted, rewritten, excerpted or otherwise duplicated in any medium without the express written permission of the publisher.
Fri, 09/11/2020 - 12:12am