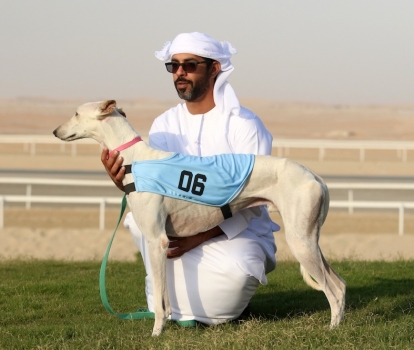 Story and photos by Yossi Guy

When visiting Abu Dhabi, we were taken on a hunt with Salukis. Unlike many Western countries, the traditional Arabs go hunting for food, not for fun. Their Salukis are bred accordingly and are kept fit so they can catch their prey in the same way as their distant ancestors.

In order to understand a breed properly, the purpose for which it was originally bred has to be kept in mind. When humans in ancient civilization began keeping dogs, they did so for survival. The dogs would help protect them by warning and guarding against humans and animals that might attack them. The dogs also helped their owners hunt for meat at a time when they were still hunter-gatherers without farms to provide a regular supply of food.

As ancient wall paintings attest, dogs were originally domesticated in Mesopotamia, the present-day Middle East. Most of those dogs were definitely meant for hunting, particularly hound and sighthound types. In Egypt, for example, rock carvings dating back to 6000-3150 BC show dogs resembling Basenjis, Greyhounds, Pharaoh Hounds, Whippets and Salukis.

In many ancient civilizations, dogs were not just treated as animals, but were allocated divine qualities. The Egyptians had a deity named Anubis who had a human body and a dog-like head. The god of mummification and afterlife as well as the patron gods of lost souls and the helpless, his role was to accompany the dead. He also represented regeneration and life.

Back to present-day Arabs in the Middle East and North Africa. The Saluki may be found in very similar versions throughout this area, traditionally bred for hunting either small prey, such as hares, or larger animals – desert gazelles. This led to two types, one for smaller prey and the other for the larger. There are also two types of coat, smooth and feathered, that may be found alongside each other. Some dogs have larger feet designed to run in the desert sands, while others have smaller feet for hunting on solid ground and hilly terrain. 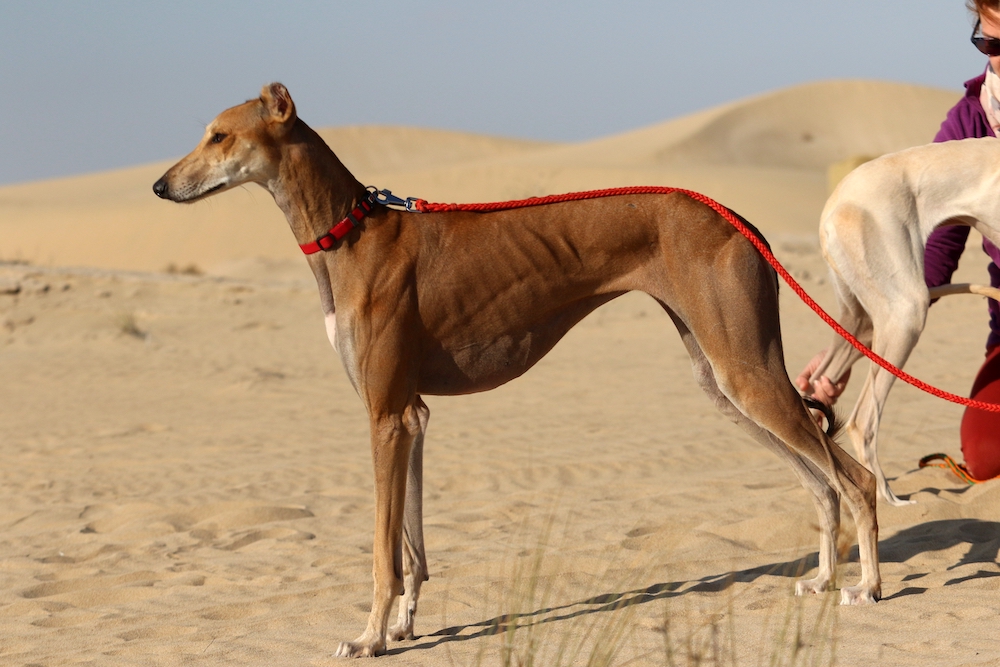 Although Islam does not encourage keeping dogs as pets and definitely not in a family home, "there are dogs and there are Salukis," as I was told by Hamad Alghanem, our host and experienced Saluki breeder. Hamad has invested a lot of his time and energy in gathering information about the breed and is in the process of gathering DNA tests to create breed identification.

Perhaps the most important feature of Arabian Salukis is their hunting instinct and capability. For centuries, the Arabs have bred males and females that have proven hunting ability, placing that trait higher than any other consideration. 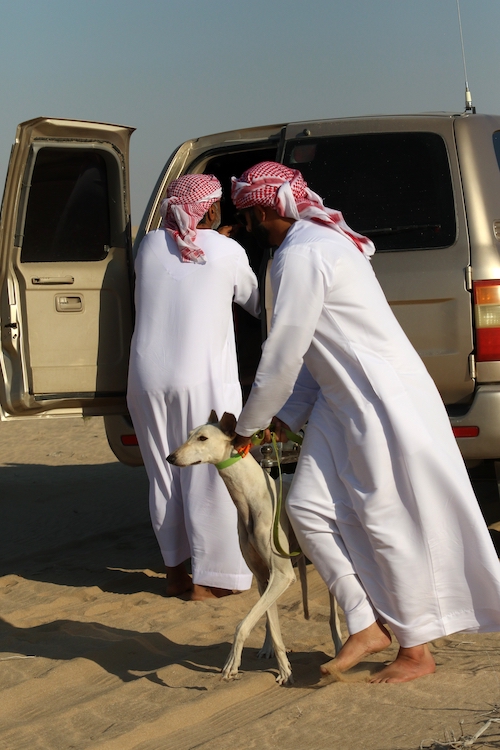 Hamad – who had invited a small Israeli delegation to the Al Dhafra Festival of local heritage, including myself; Keren Mintz, Israel's leading Saluki breeder and rescue operator, and her partner – took us hunting.

Before we went, Hamad told us we would have to eat the catch – otherwise we could not go.

As a rule, hunting on public land is forbidden in the Emirates. However, they do have special reserves on which the prey – hares and gazelles – are bred, and where local hunters can come with their dogs to hunt.

The reserve is a huge area with sand dunes reaching the horizon. At the gate, our hosts deflated their SUV tires in order to be able to drive on the soft sand without sinking or sliding. A road led to the central buildings that house the administration and local employees. We started out to the dunes.

The three cars rocked and swayed in the sand; two of them carried the Salukis that would hunt. We drove for a while, following the first vehicle, whose driver knew where to take us. When we reached our destination, which did not appear to differ from the other dunes, we stopped and waited.

About 500 yards away, we saw a local man dressed in the traditional gown and headdress bending over with something in his hands.

The Saluki owners took two of the dogs out of their car and pointed the dogs in the direction of the man.

He then released the hare he was holding. The dogs did not need much encouragement to spring forward and run toward the prey. 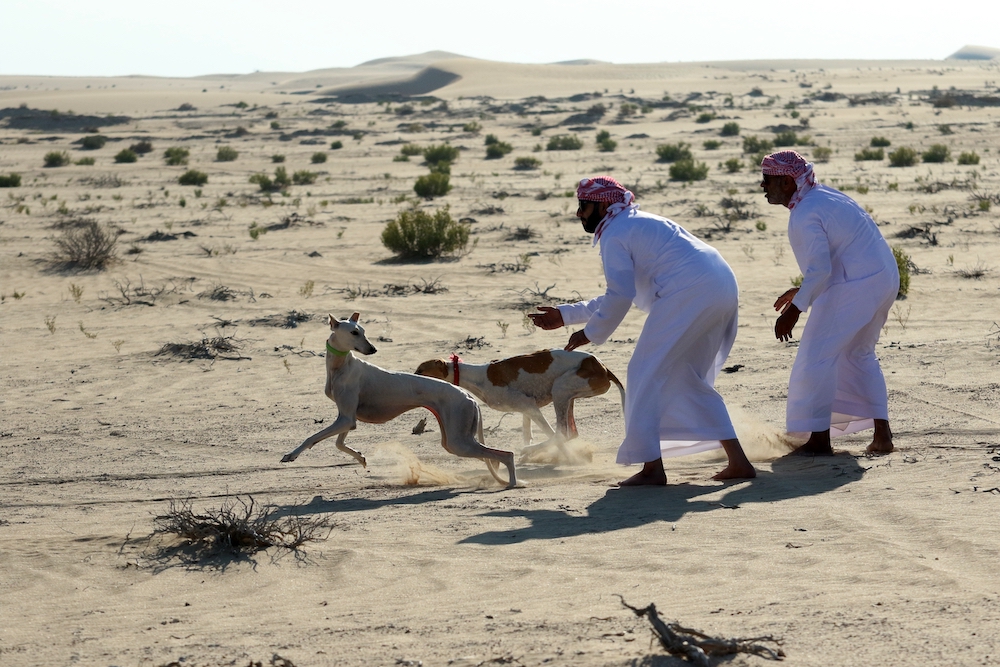 The two ran together, each taking the lead every once in a while. The hare swerved from side to side, running through the low bushes, trying to evade the two Salukis.

The dogs didn't give up, gradually getting closer to the hare. The cars were dancing on the sand in pursuit. At one point we almost ran over one of them due to the hare's antics, but that didn’t last long.

In a final spurt, one of the Salukis caught the hare and proudly held it in its mouth. The owner summoned the dog, which came and placed the prey at his feet. Since Islamic law forbids eating an animal killed by another animal, the hunter had to do the final killing.

I know this sounds cruel, and it was definitely not a pleasant sight. However, the locals do not hunt for fun; they hunt for food. That's their heritage, and they want to preserve it.

A while later, the two other dogs were taken out of the car, and again a hare was dispatched as prey. This time they made short work of it, catching the hare quite soon after it was released.

It turns out these animals are raised especially for hunting and are not wild hares that run around in the sand all day, so some of them are not extremely athletic.

We thought the hunt had ended with the hares. The cars started driving through the sandy areas, and we had no clue where they were going, believing we were returning to the camp.

We reached a large dune overlooking the desert expanse where the cars stopped. Hamad kept looking out in a certain direction where I could see a line of bushes.

Suddenly, we noticed dust rising above the sand and we quickly came to realize that they had released a small herd of gazelles.

Since everything on the reserve costs money, hundreds of dollars, we hadn't expected our hosts to pay for a gazelle, but they did.

The dogs were set free, and the race was on. Survival of the fittest. The gazelles were faster than the hares, causing the Salukis to turn on their engines and speed after them. The cars twisted and turned, making it much harder to follow the course of the hunt. I just held on for dear life.

And then it was over. The Salukis caught a gazelle, waited for their owners, and the rest of the herd galloped into the horizon.

The proud owners ended the gazelle's misery and then had their picture taken with the dogs and the prey.

We drove back to camp, where the meat was cooked over a bonfire, and after it was ready, we ate dinner.

It's not surprising that these dogs are also entered in races. A few days earlier, the Festival held a race for Salukis. There were around 100 dogs in the preliminary races, from which the 10 best males and 10 best females were sent to the finals.

The race was held at the camel-racing facility in Al Zayed, the capital of the Dhafra Region of Abu Dhabi named after Sheikh Zayed bin Sultan Al Nahyan, the first president of the United Arab Emirates who is regarded as the father of the nation. Close to the race course is an impressive building containing offices, indoor observation of the finish line and auditorium.

There were two heats, one with 10 males and the other 10 females, winners of the preliminary races. The handlers brought the participants to the starting line while Hamad prepared the lure, a lifelike model of a gazelle hanging on a crane attached to a truck. When the command was sounded, the Salukis were off, chasing the "gazelle" that kept evading them. 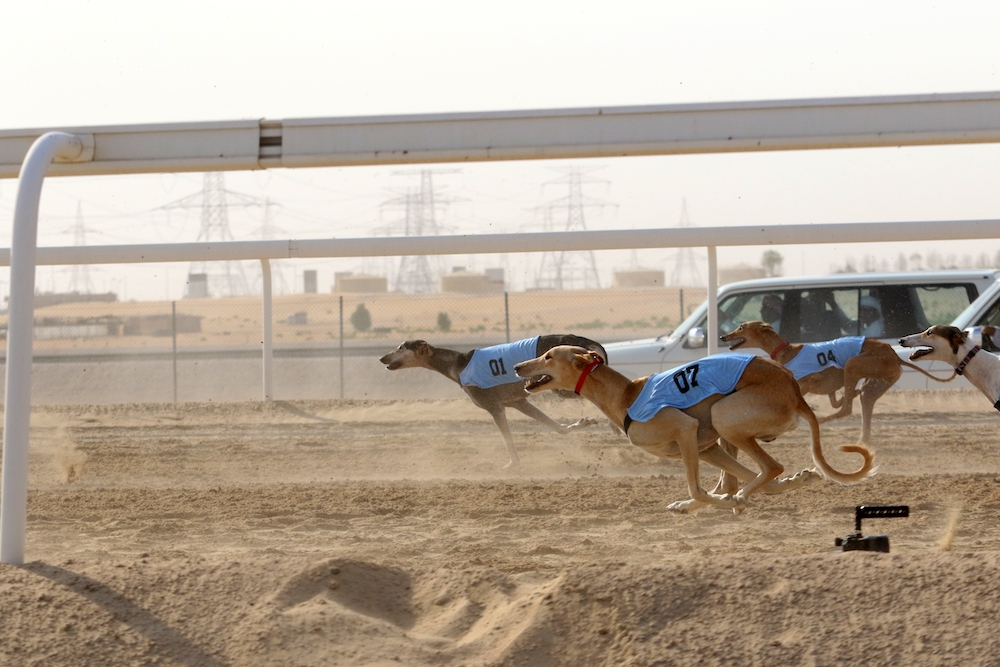 The owners, in the meantime, boarded their vehicles and sped along the course, honking their horns and shouting out to their dogs. The race covered approximately 1.5 miles, and took about seven or eight minutes. On crossing the finish line, the Salukis were greeted by handlers who sprayed them with water to cool them down.

Before the awards ceremony, vets collected blood samples from the winners to ensure they were not drugged.

Watching the Salukis race, the similarity to the hunt was quite obvious. The handlers held their dogs at the start line. Instead of a live animal, there was a lifelike gazelle hanging from a car in front of the pack. The dogs raced for about two miles to the finish line, where three Salukis in each heat were awarded huge cash prizes and beautiful trophies.

I later learned that some of these dogs had taken part in the hunt. 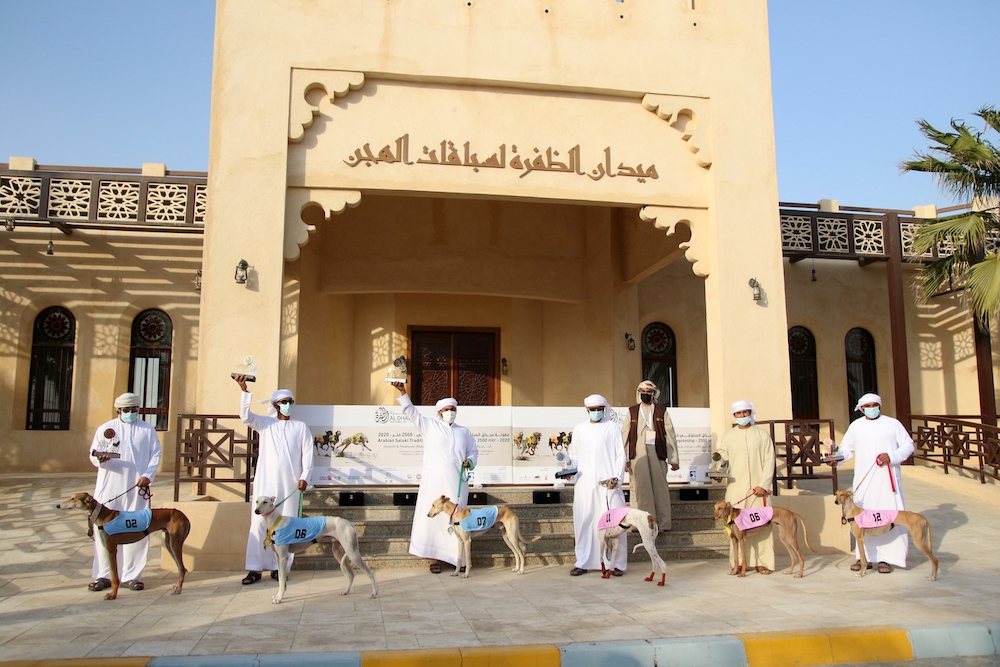 One of the problems facing Hamad and his mates is keeping the Salukis purebred. Many locals cross their Salukis with Greyhounds in order to obtain better speed and stamina, or so they believe. This, of course, poses a problem when breeding. At the races, Hamad weeded out dogs that obviously had a large ratio of Greyhound blood, thus encouraging the participants with real Salukis.

Many in the Western world believe hunting to be a cruel sport. As we saw, the Arabs do not consider it a sport but a way of life, a way of preserving their heritage in these modern times. Observing the hunt and race gave me, as a judge, a new perspective on these graceful hounds.

© Dog News. This article may not be reposted, reprinted, rewritten, excerpted or otherwise duplicated in any medium without the express written permission of the publisher.
Tue, 03/09/2021 - 10:12pm